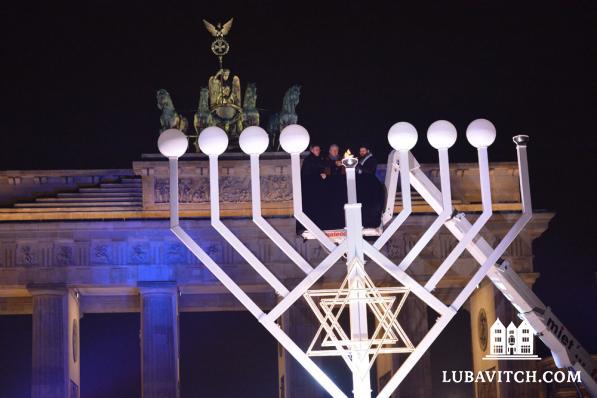 Hundreds of Berlin Jews, government figures and ambassadors representing the U.S., Russia, Moldova, the Czech Republic, Austria, and Hungary, were among those who convened at the Brandenburg Gate for the traditional public Chanukah lighting ceremony last week.

According to Rabbi Yehuda Teichtal, Chabad representative to Berlin, it was the tallest menorah in Europe.

“Lighting the Chanukah menorah in this place proves that there is Jewish life in Germany,” said the Rabbi.

Norbert Lammert, president of the Bundestag, was among the guests at this event:

“Not long ago, we commemorated the 75th anniversary of the Kristallnacht pogrom,” he said. “In those days, Germany parted from the civilized world for several years, and in those days many people had good reason to believe that these events signaled the beginning of the end of Jewish life in Germany.”

Organized by Rabbi Shmuel Segal, director of activities at the Chabad Jewish community center in Berlin, this is the 10th year that Berlin’s Jewish community is celebrating Chanukah publicly. “Not in a remote corner so that no one will notice, but in the main square of Berlin,” said Lammert.

“This is an excellent expression of the changes that Germany has undergone since the Nazi regime over the past few decades, thanks to the many efforts of those who believe in democracy.”

Klaus Wowereit, Mayor of Berlin, participated at the lighting: “Every Chanukah candle that is lit at the Brandenburg Gate gives a very significant message.

“It is an achievement for Berlin that communities can celebrate their holidays in public. This is the face of Berlin today, and this is the way that it should be. Rabbi Teichtal is an excellent example of the strength of Jewish life in Berlin.”