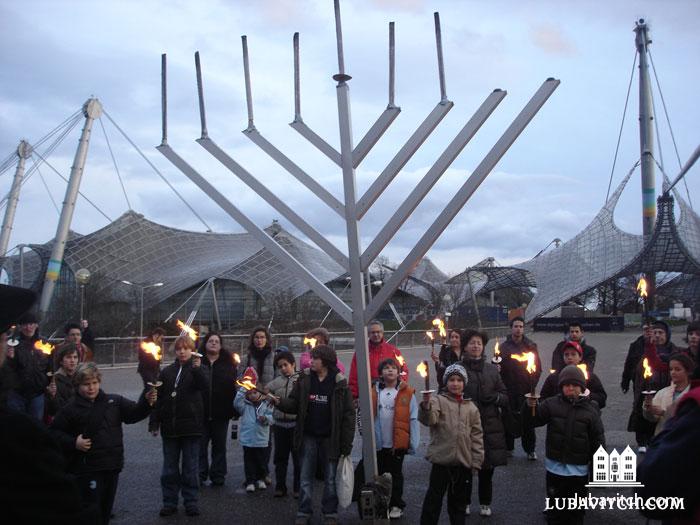 (lubavitch.com) Survivors of Kristallnacht will tell you that they remember the flames. Fires shot out of the roofs of synagogues and the smell of burning Torahs mingled with the sound of splintering glass. It was the sinister brightness of the dark night that etched itself into the memories of German Jews.

It is no wonder then, that the large menorah lit in the center of Munich is such a powerful symbol to the Jewish community. “The menorah represents the future of Jewish life in Germany,” explains Rabbi Israel Diskin, who has been the Chabad representative to the city since 1988.

Together with Mayor Christian Ude, Diskin lights the towering menorah each Chanukah. Last year, as the two were being raised on the crane, Ude and Diskin discussed the establishment of 10 such menorahs around the city. Ude told the crowd that on “Kristallnacht we discuss the past, but on Chanukah we talk about the future.”

Before Kristallnacht, 12,000 Jews lived in Munich. Today most of the 9,000 Jewish residents are immigrants, with the majority hailing from Russia and Israel. Very few Munich Jews or German Jews in general, predate the Holocaust. Modern Jewish Munich is close-knit. Chabad representatives here work in conjunction with the organized community and Diskin is the rabbi of the local Orthodox synagogue.

Before he arrived 20 years ago, the people of Munich wrote to the Lubavitcher Rebbe looking for help with promises to assist whomever the Rebbe sent. The relationship between the Rabbi and the community, says Diskin, “has always been close.”

Diskin’s apartment faces Adolf Hitler’s home until 1932. Here where the ground is drenched in Jewish blood, it is hard to forget the past. “In the beginning,” he recalls, “it was very emotional to be here. Every time I walked down the street, I thought about what happened 40 years ago.”

Now, he says, “we have to put our feelings aside to get the work done. But, we will never, never forget.”

“Everywhere we go, we are reminded of the Holocaust,” says Rabbi Eliezer Chitrik. “Each home that used to belong to a Jew has a stone with their name etched on it, cemented in front.” Chitrik is Chabad’s representative to Nuremberg since 2005. Near his home, the infamous Nuremberg Laws were passed, prohibiting Jews from holding certain jobs, visiting public parks and hospitals, and obtaining higher education.

“When we bring Jewish life to this place,” says Chitrik, “we are achieving true revenge against the Nazis.”“The Nazis came to town when I was 10 years old,” recounts Arno Hamburger. Several years later, “in 1939, I escaped to Palestine and joined the British Army in ’41,” he says. Since his 1946 discharge, Hamburger has been living in Nuremberg. Today, he is the president of the Nuremberg Jewish community and an active city councilmember.

Life here, though “vibrant and good,” is very different from the city of his youth. Before the Nazis arrived, Hamburger “lived a normal life” and attended the two great synagogues with his 9,500 Jewish neighbors. Today there are 1,700 Jews in Nuremberg, and like other German cities, most are immigrants from the former Soviet Union. Though Judaism is an official religion recognized by the government (signed into law by former Chancellor Gerhard Schroeder in 2003), life here is not without its worries.

“There is definitely anti-Semitism here,” admits Hamburger. “But we oppose it and we are not afraid.” Last week, Chabad’s representative to Berlin, Rabbi Yehudah Tiechtal and eight students were intimidated by neo-Nazis. In response to increasing right-wing crime, Parliament voted to “support and protect Jewish life in Germany” and to fight anti-Semitism on all levels.

The anti-Semitism of 70 years ago shattered lives along with storefronts. It was the catalyst, say many historians, which transformed anti-Jewish propaganda and legislation into a full-blown Holocaust. In commemoration, Kristallnacht will be remembered across Germany this weekend. At a memorial evening in Munich, youth will recite the names of the 4,500 Jews from their city who were killed by the Nazis. In Nuremberg, 400 people will convene at the local cemetery and watch as the mayor lays a wreath on Jewish graves.

After the ceremonies are done, and the memories are once again tucked away, it is the future of German Jewry that is at the forefront of community leaders’ minds. In Munich, Diskin is focusing on the future with an eye on local youth. He believes in instilling a strong Jewish identity in teenagers, before they begin to date non-Jews. In this way, he hopes to prevent what he terms, “the biggest tragedy of modern Jewish life:” assimilation.