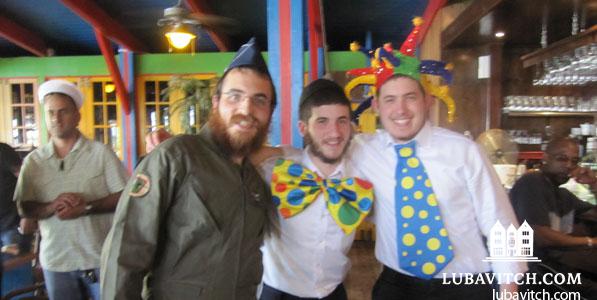 (lubavitch.com) After staying up most of the night preparing, we began our day early Sunday morning, Purim day. We went for a swim with our friend the Holocaust survivor and a French doctor. After davening shachris we headed towards the airport to catch our flight to the island of Saba.  We boarded a 12 seater plane, and 10 minutes later were flying over our destination which has a landing strip the size of an aircraft carrier.  Even 12 passenger planes do not usually land there. But strong winds prevented our plane from landing, and the captain announced that he was turning the plane around and heading back to St. Maarten

We were quite upset because the Jews on Saba would not get to hear Megillah reading now. As we walked through the airport waiting to see if another flight would possibly be going out that we could try to board  we bumped into the Russian couple we had met on Friday night. They were waiting to catch their flight back to New York, as was the family from Pennsylvania whom we had met on Friday night. They were about to board the plane and we told them what happened with our flight to the island of Saba and how disappointed we were not to be able to read the Megillah for the Jews there.

As we talked to them, it occurred to us that perhaps things turned out this way so that we could read the Megillah for these people. We pulled out our Megillah and read it for them in the middle of the airport.  A lot of people, Jews and non-Jews stopped, listening intently as we read. We explained the miracle of Purim and the content of the Megillah to and the holiday’s customs.

Rabbi Chanowitz was on his way back from St. Bart’s where he read the Megillah for the Jews who were there, and got the Purim festivities rolling.

When we were sure there were absolutely no flights be going to Saba that day, we headed back to the Chabad House. We called the Jews in Saba who were waiting for us to arrive to begin the Purim festivities. They said they found out that our flight was cancelled because it could not land there and decided to make their own Purim party.

We began to “kasher” [kosherize] the non-kosher restaurant where the party on St. Maarten was to be held. The party turned out to be beautiful and very inspiring. All types of Jews were there, French, Israeli, American and many other nationalities. We danced, we sang, we ate, we inspired and we were inspired. We talked, we taught and we learned. We ate, we drank, we laughed and we cried. What a Purim!

We met so many different types of people yet we felt connected to and could identify with each one of them. What an experience . . .

After the Purim extravaganza, we cleaned the place up and went back to the Chanowitzes for a farbrengen late into the night with a few others who weren’t ready to call it a night. There was singing and celebrating such as the Caribbean has never seen before.

Related Articles
View All
Purim Journal Part II
Friday Morning  Got up early this morning. Drove out towards a hotel where we were going to make sure the Jewish guests knew about Chabad…
Purim Journal
Use the preview site to make sure the text you enter here fits.
First Chabad House Opens in St. Martin/St. Maarten
Chabad-Lubavitch Headquarters officially appointed new Chabad representatives to St. Martin/St. Maarten in the Caribbean Islands.
Get Inspiration to your inbox!
Newsletter
Join our weekly newsletter for inspiration and updates
Donate
Find Your Local Chabad Center
Chabad
About Chabad-Lubavitch
About Chabad Lubavitch
The Rebbe
Headquarters
Magazine
Magazine
News
News & Updates
In The Media
Impact
Social and Humanitarian
Social and Humanitarian
Education
Education
Community
Community