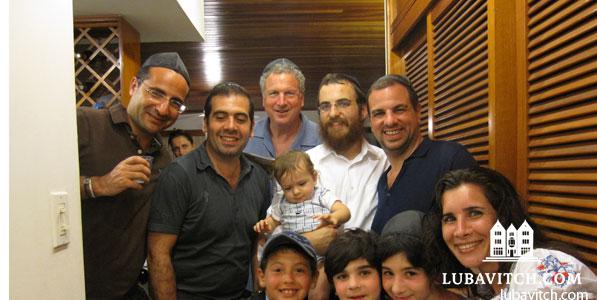 Got up early this morning. Drove out towards a hotel where we were going to make sure the Jewish guests knew about Chabad and Purim and all the Purim programs. We spent the afternoon, traveling from one resort to another on both the Dutch side and the French side of St. Maaretn, finding Jews and inviting people to the Purim programs. We got home in time to prepare for shabbos. The shliach received lots of calls  from a people on the island saying they heard about two rabbis who came by and they wanted to come for Purim.

Shabbos came in and guests started to arrive. Among them were a couple from Russia, a medical student from Buffalo, a few Israeli locals who work in diamonds, and a family from Pennsylvania, and so many more. We had a huge, beautiful shabbos meal (prepared by  Mrs. Chanowitz. We sat around the table talking with the people for hours.

After the other guests left, the Israeli guests lingered on and farbrenged till the early hours of the morning. We discussed many topics they were interested in. We sang nigunnim that were easy for them to pick up; we we sang Israeli songs that they were familiar with, and we really bonded. They wanted to spend more time with us, so we made up that we’d come to them at their office on Monday morning and show them how to put on the new tefillin we had brought from New York,  and teach them how to daven and the meaning of the prayers. They seemed really happy about this.

Shabbos morning we had a minyan of men for an inspiring davening. Afterwards we sat down to a beautiful full kiddush. At  the kiddush the Holocaust survivor told us his story.

He grew up in Cracow next door to Schindler. Schindler bribed the guards to let his parents out. He was four years old at the start of the war and it was too dangerous for him to go to Lvov with his parents, who went there and hid with a non-Jewish family until the end of the war. So his housekeeper kept him, sticking to the story that she is her son. At some point, she started working in the house of one of the high ranking SS officers. One day when he was eight or so the Gestapo came to the camp and claimed there was a Jewish kid there, but the German guards told them that without papers they cannot do anything. Two weeks later they returned with paper and took him and his “mother” (the house keeper who stuck with him even though she was risking her life), and they were in prison for around 9 months by which time the war ended.

When he was done we sat and talked and talked with him and all the other guests. There was so much that they wanted to know, so many questions that they had.

At eight in the evening purim guests arrived for the reading of the purim megillah. We then began our major preparations for Purim’s programs.

After Shabbos, we packed shalach manos and cooked in the kitchen till two a.m. preparing for a party on the St Bart, Saba, and back to St Maarten later in the afternoon.

Related Articles
View All
Purim Journal
Use the preview site to make sure the text you enter here fits.
First Chabad House Opens in St. Martin/St. Maarten
Chabad-Lubavitch Headquarters officially appointed new Chabad representatives to St. Martin/St. Maarten in the Caribbean Islands.
Holiday & Shabbos
Lag B’Omer Innovation Under Lockdown
On Monday evening at 18:00 sharp, 45,000 individuals tuned into the livestream at 18for18.com.au. Narrated and presented by children and individuals from Jewish communities across Australia…
Holiday & Shabbos
A Shabbat Dinner for Wine Country Survivors
With California’s wine country reeling from this week’s horrific wildfires—the most destructive of their type in California’s history—Chabad of Sonoma County is rallying the forces…
Holiday & Shabbos
Moving Out
To get her sukkah to Inwood Park in Manhattan on Sunday, artist Shaina Denburg detached its walls. But even in pieces, it didn’t fit in…
Holiday & Shabbos
A First for Sukkot in Shanghai
Rabbi Shalom Greenberg has celebrated Sukkot in Shanghai every year since 1998, but this year’s the first that he’s been able to legally import the…
Get Inspiration to your inbox!
Newsletter
Join our weekly newsletter for inspiration and updates
Donate
Find Your Local Chabad Center
Chabad
About Chabad-Lubavitch
About Chabad Lubavitch
The Rebbe
Headquarters
Magazine
Magazine
News
News & Updates
In The Media
Impact
Social and Humanitarian
Social and Humanitarian
Education
Education
Community
Community