Preparing Them for Bar Mitzvah: Rabbi Works With Special Children 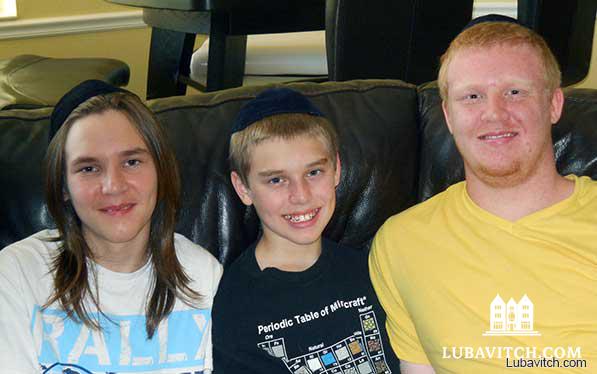 When Ryan Meindl was called up to the Torah in honor of his bar mitzvah earlier this month, he felt well prepared. Blessed with a good ear for music, he used transliterations and did a fine job reciting the blessings for his aliyah and the Torah.

Small for his age, Ryan’s rabbi arranged for him to carry a small Torah while a family member carried the larger one. “Everybody made sure to respect that little Torah as much as the big Torah and not make him feel like a little boy,” his mom, Kathleen, reflects.

Back when he was four, Kathleen scanned the Internet for a synagogue where her three sons could “be exposed to what it was like to be around other Jewish people and to Jewish customs and culture.”

Any parent concerned about their children’s spiritual development will want to tread carefully, making wise choices to ensure a positive experience. For this mom of three boys with various learning and social difficulties, the process would require greater scrutiny and care.

The Meindls, including Kathleen’s husband, Christopher, found a welcoming environment of inclusion at the Chabad Jewish Center of St. Petersburg, Florida, back in 2006, when they accepted an invitation by Rabbi Alter and Chaya Korf, to join Rosh Hashanah services there. That first invite would open the way to a rewarding relationship with their Jewish heritage as the boys grew to bar mitzvah age.

Preparing for a bar mitzvah is often a source of angst and anxiety for any child. Simply learning to decode the Hebrew letters, which look so much alike to the non-Hebrew reader, learning how to pray, to wrap tefillin, to apply different chants, or trup to the Torah and haftarah readings—all of these can be daunting. If that isn’t enough, doing it in front of friends, family, and the entire congregation may make even the most confident of 13 year old boys sweat bullets.

For the Meindl boys, the anxiety might have been many times compounded: Barry, the oldest, has trouble focusing and paying attention; Max suffers from tics; and Ryan, the youngest, has some serious learning issues. But as of Ryan’s February 7 bar mitzvah, all have successfully navigated this life cycle event, each in his own way.

Kathleen attributes much of the boys’ success to the environment created by the Korfs. “Chaya and Rabbi Korf made my kids, who are not comfortable in other places, feel safe, comfortable, and accepted,” she offers. “They never shied away from them, never judged them, never thought twice.”

Exercising a high level of sensitivity to the boys both during their Hebrew school education and, eventually, their bar mitzvah studies, was at the top of everyone’s concern. The creativity and flexibility that Chaya and Alter brought to the experience made all the difference to the boys and their parents.

Kathleen recalls one session with her older son in which Chaya tried to demonstrate the idea of the neshama, the soul, in a concrete way. She darkened the room and then turned on a small light that illuminated all the darkness. When she noticed that Barry seemed fearful of the dark, she let that go and found another way to convey the lesson.

Max, her middle son, was “very closed up” and “very anxious,” his mom told Alter. So the rabbi opened Max’s first lesson with a game of Uno, Max’s favorite game. “That was the beginning of a very special bond with the two of them,” says Kathleen.

Alter took the time to get to know Barry, the better to help “him shine.” Recognizing his gift for memory, Alter taught him traditional skills, employing Aleph Champ, a Hebrew reading program that allows kids to take the challenge in incremental steps. With Aleph Champ, levels are graded by color, like the karate system, and the sense of achievement following each level mastered builds anticipation and excitement conducive to consistent learning.

Barry did well. He learned to read the blessings before and after in the traditional Hebrew from the siddur, to put on tefillin, and gain proficiency in saying the Shema.

As with his younger brothers, creating a connection was critical to him, and Kathleen was gratified at the bonding he achieved with the rabbi. “Normally, I wouldn’t be able to leave the room, but he became comfortable enough, and [when they were ready for the first lesson] he didn’t necessarily need me to be with him right there.”

Max, Kathleen’s second son, used the podium at his bar mitzvah to talk about his discomfort in public. In a particularly memorable way, says Alter, “he spoke to the congregation on Shabbat with self-awareness of his own personal challenges, thanking everyone for being so kind and forgiving when he had to leave early every Shabbat because he has a hard time socially. The way he spoke so openly about himself, with humor, made the listeners connect with him in an amazing way.”

In their lessons leading up to the bar mitzvah, Alter focused on making him feel comfortable in any synagogue, gaining familiarity with the Torah, the ark, the eternal light. Building on Max’s creativity, Alter asked him to make a synagogue model of a synagogue.

Ryan can’t read Hebrew and has difficulty remembering the stories of Chanukah and Passover. “It’s always new, to the point that he gets frustrated,” Kathleen says. “I explained this to the rabbi, who said ‘all we want is for him to feel successful and happy.’”

Given Ryan’s inclination to see things in black and white, Alter taught him about charity. “He wants to be a good person and do right, and that spoke to him,” says Kathleen.

Proud On the Podium

On his big day, Ryan stood tall on a stool to augment his height. He looked out at the congregation feeling like “a giant, smiling, making eye contact, sharing humorous anecdotes,” recalls Alter. “He was so comfortable sharing with the community and with who he was as a Jew.”

Invested in giving her children the best chance to grow and integrate successfully, Kathleen is grateful for the positive memories of their bar mitzvahs.

“To see them blossom and feel confident enough to go in front of the congregation and our family, to do prayers and speeches, with pride and so much of their personality coming out, to see them carrying the Torah around the room—it gave them strength.”

Longtime Chabad congregant, Mike Frye was inspired by the way the boys crossed this major lifecycle event in their lives. “It really completed the cycle for this family for all the boys to be bar mitzvah, to attend Talmud Torah, to practice their Judaism, to see a family unit grow over the years.”

Related Articles
View All
Uncovering The Artist Within: Exhibit of Works by Children With Special Needs
Friendship Circle has partnered with Bear Givers foundation to nurture the artistic talents of individuals with special needs towards an exhibit Art of Friendship.
Mother of Autistic Child Promotes Inclusion, Kindness
“In 1964 this condition [autism] was virtually unknown, still in its infancy. I was overwhelmed, and unsure of how I would cope,” says Chana Sharfstein,…
Striving for Inclusion, Chabad Inspires Opening of Retail Shop
When parents of adults with special needs wanted to organize a group home in Charlotte, North Carolina, Rochel Groner had another idea.
Musicians With Special Needs Release Recording
Chauffeured in limousines, dressed in formal attire, prepped by stylists, these aspiring musicians with special needs had the red carpet rolled out for them and…
Children With Special Needs and Their Parents Applaud Chabad’s Friendship Circle
“A model for a Jewish People unified by shared goals and ideals,” is how Dr. Talya Fishman describes Friendship Circle of Chabad of the Delaware…
Michigan Friendship Circle Breaks Ground For New Facility
“We all grow up and have a dream that we will get married and have children. We just take it for granted that our children…
Features
Remembering The Struggle for Russian Jewry
Ninety-three years ago today, Rabbi Joseph I. Schneersohn, sixth Lubavitcher Rebbe, was freed from Soviet-imposed exile.
Features
Wordsmith: Tamim
The tamim is unflappable. He does not sway with the winds of change, nor bend to meet the expectations of others. He is a simple…
Features
Remembering Rebbetzin Chana: Jewish Feminine Role Model
Rebbetzin Chana Schneerson, a feminine role model of Jewish activism and proponent of Jewish scholarship, mother of the Lubavitcher Rebbe and wife of Rabbi Levi…
Features
Defying Religious Stereotypes on Israel’s College Campuses
By the time Zehavit Mohager, a psychology student, began her studies at the University of Haifa at age 23, she had already completed her army…
Get Inspiration to your inbox!
Newsletter
Join our weekly newsletter for inspiration and updates
Donate
Find Your Local Chabad Center
Chabad
About Chabad-Lubavitch
About Chabad Lubavitch
The Rebbe
Headquarters
Magazine
Magazine
News
News & Updates
In The Media
Impact
Social and Humanitarian
Social and Humanitarian
Education
Education
Community
Community