A moment in the limelight gives musicians their due 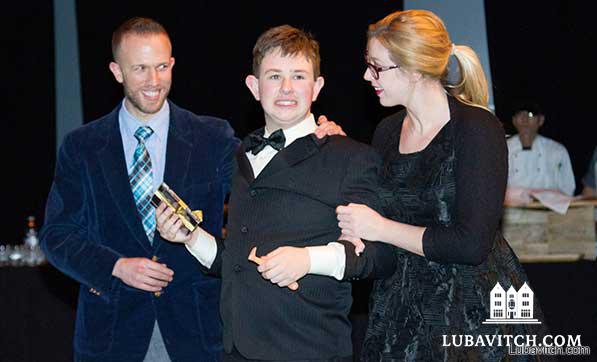 Josh Madoff, of the Chameleon Music School, presents a CD to an aspiring musician with special needs. Below: Brooke Salon poses at the debut of the new CD Let’s Talk About Life; Chani and Rabbi Zev Baram, directors of The Friendship Circle Philadelphia Region South; and Annie Kramer-Golinkoff on the red carpet.
Photo Credit: Photos: Levi Sherman and Steve Belkowitz

Chauffeured in limousines, dressed in formal attire, prepped by stylists, these aspiring musicians with special needs had the red carpet rolled out for them and an enthusiastic crowd cheering them on. They were celebrating the release of their very own album recording, Let’s Talk About Life.

“This is a dream come true that I didn’t even know I had,” says Joan F. Wolpert, mother of Riffy, a 23 year old adult with special needs. “It was about being on top of society and not on the lower echelon. Our children were the stars and we were collecting the star dust.”

Gathered at the Fringe Arts Theater in Philadelphia, Pennsylvania, on January 3rd, twenty-two musicians joined by their families, were given their due honor for their musical efforts. The album was a joint project of The Friendship Circle Philadelphia Region South, a division of Chabad-Lubavitch of Philadelphia, and Chameleon Music School.

“This is the culmination of many months of effort by these young adults with special needs, who really had a chance to tap their creativity,” said Chani Baram, director of the Friendship Circle. She says that ever since they established Friendship Circle in 2004, they have been looking for ways to help adults with special needs achieve their own goals.

“Everybody has something to important contribute to the world and we are honored to recognize the contributions of all people,” Baram says. “This is our responsibility—to  think of ways to do that in a meaningful way that includes people with special needs.”

Music has been an integral part of the Philly Friendship Circle activities, where over a third of those involved do not have the ability to express themselves in words. The music gives them the chance for self-expression. In a way, Baram says, “it gave a voice to those who do not have one.”

“It is no exaggeration to say that we were completely astounded by how much soul, innocence, and unrestrained expression the participants brought to this process,” said Josh Madoff, a piano instructor and owner of the Chameleon Music School. “Most producers and artists we know, ourselves included, spend their entire careers striving to make music with this much honesty and emotion.”

While Chameleon staff showed the young artists how to use the equipment and helped keep them focused, the participants made every decision, created all of the drums, played percussion, played every synthesizer or instrument, and wrote and performed all of the vocals. DJ Siyoung, the school’s executive producer and mixing engineer, who has toured internationally recognized artists, produced the unique recording.

The creation of the CD meant that those involved were required to play by all the same rules than anyone involved in such a creative effort must. Where allowances are often made for people with special needs—sometimes to their detriment—here they found themselves having to listen to instructions, to stay focused on their duties and to sit patiently and quietly to wait their turn, and rose to the challenge.

Baram hopes that the broader community will recognize the value that people with special needs contribute, as productive members of  society. “We want companies to know that they can hire adults with special needs at their business,” she says. “We as a community need to recognize how much we benefit when everyone is allowed the opportunity to participate in our society.”

For Wolpert this event was especially important. “When my son was diagnosed with special needs, there was nothing here for them in the community to be a part of. The Friendship Circle has made all the difference in these people’s lives,” she told lubavitch.com.

With flashing cameras, clapping, the spotlights on at the Red Carpet Album Release event, these musicians, who have rarely if ever had a chance to shine, enjoyed celebrity status.

“We were treated as if we were exceptionally important. Our children had their 15 minutes of fame,” Wolpert says.

Related Articles
View All
Striving for Inclusion, Chabad Inspires Opening of Retail Shop
When parents of adults with special needs wanted to organize a group home in Charlotte, North Carolina, Rochel Groner had another idea.
UJA Awards Chabad’s Friendship Circle Leaders
(lubavitch.com/LNS) Friendship Circle Ontario coordinators, Chabad's Mrs. Esther Grossbaum and Mrs. Chaya Perman, were recently honored with the distinguished UJA Federation Inclusion Initiative Award. “What…
Michigan Friendship Circle Breaks Ground For New Facility
“We all grow up and have a dream that we will get married and have children. We just take it for granted that our children…
Children With Special Needs and Their Parents Applaud Chabad’s Friendship Circle
“A model for a Jewish People unified by shared goals and ideals,” is how Dr. Talya Fishman describes Friendship Circle of Chabad of the Delaware…
Get Inspiration to your inbox!
Newsletter
Join our weekly newsletter for inspiration and updates
Donate
Find Your Local Chabad Center
Subscribe
|
Log In
Chabad
About Chabad-Lubavitch
About Chabad Lubavitch
The Rebbe
Headquarters
Magazine
Magazine
News
News & Updates
In The Media
Impact
Social and Humanitarian
Social and Humanitarian
Education
Education
Community
Community