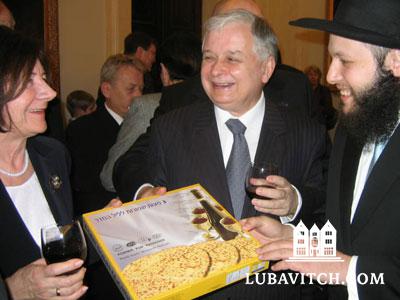 (lubavitch.com) Poland’s President Lech Kaczynski recently took time to learn about the holiday of Passover and its rituals from his country’s director of Chabad activities, Rabbi Sholom B. Stambler.

The President has been making visible efforts to strengthen his ties with Poland’s Jewish community. He is particularly pleased, he told Rabbi Stambler, by Chabad’s efforts in building a viable Jewish life experience for his country’s Jewish population.

“The President wanted to know about our Passover outreach activities, and was especially enthusiastic to learn that we brought 12 rabbinical students from abroad to conduct communal Seders in 8 cities of Poland,” said Rabbi Stambler.

President Kacyzinski and his wife received a box of hand made shmurah matzah from Rabbi Stambler, inquiring about the Passover traditions.

“The President clearly appreciates that our focus, in leading the Jewish community, is on the here and now, and that we are dedicated to growth and to a promising Jewish future here,” said Stambler.