Partnering for Jewish Continuity: The UJC and Chabad-Lubavitch 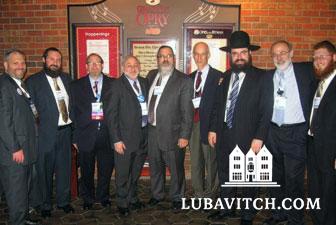 Chabad delegations and the senior staff at the UJC

That two of the largest Jewish organizations in the world overlapped their annual conferences earlier this month was not by design. But increasingly, and to the benefit of Jewish communities wherever the two cooperate, United Jewish Communities (Federations of North America) and Chabad-Lubavitch are crossing paths and discovering the strength that comes in working together.

At the UJC’s General Assembly, Chabad's Rabbi Avraham Berkowitz executive director of the Federation of Jewish Communities of the CIS and Baltic States was asked to be part of a panel discussion. His topic “Building Jewish Identity Across the Globe” seemed to confirm the Federation’s growing appreciation for Chabad’s role as a vital force in Jewish continuity .

At GAs past, Chabad representatives led Torah study sessions. This year, the panel Rabbi Berkowitz took part in tapped into Chabad’s experience as a community starter. It was billed as a “thought-provoking approach to the very issues federations and agencies are tackling locally” that would contribute to “thinking about strategy and sense of people hood.”

On a weekend that brought some 4000 Chabad representatives to New York for their annual conference, a good number of the rabbis shuttled south to Nashville where the 3500 people had gathered for the UJC’s annual meeting, General Assembly. They comprised Chabad’s largest delegation to the GA yet. They came as representatives, panel discussion participants, grant recipients, and award winners, to share what they have learned in their leadership positions and to learn from their UJC peers.

Action at the GA was representative of the growing UJC support of Chabad activities, especially in the humanitarian sphere. For its work buddying teen volunteers with children with special needs, Chabad of Palo Alto received at $50,000 programming grant, and its Friendship Circle received $10,000 to train and inspire its teenage volunteers.

In the aftermath of disasters, where UJC has the will and ability provide assistance and Chabad has the local manpower and contacts, much good has been done. After Hurricane Katrina, UJC funded Chabad’s post-disaster relief in New Orleans with major funding during their relief efforts, and the Federation of Orange County, CA, funded a $10,000 grant for Chabad’s work in southern Mississippi. When Chabad of Thailand answered the call for help after the tsunami, the UJC contributed toward the emergency fund.

Chabad’s relationship with UJC has been building up momentum in communities across North America. UJC involvement runs the gamut of support. It can be a toe in the water, such as the co-sponsorship support given to Chabad of Houston’s Unity Bike Ride last year by the Jewish Federation of Greater Houston. Or it can be as extensive as in the northeast where the Chabad-run Southern Connecticut Hebrew Academy is a longtime agency of the Federation of Greater New Haven.

In newer centers, it’s common for Chabad’s first connections with the local UJC branch to take root at a tefillin booth, a model matza factory, or Chanukah menorah lighting. The link grows when Chabad’s services dovetails with the Federation’s agenda, as it does in Central New Jersey where Chabad representatives teach at the Jewish Federation’s annual evening of Torah study. From these casual encounters personal friendships grow, and often much common ground is identified.  Repeat this scenario in enough communities, and the happenings at GA 2007, where Chabad’s expertise in community building was a voice heard in a number of sessions, fall into place.

“Everyone seems to have a Chabad story,” said Chabad’s liaison to the UJC Rabbi Dovid Eliezerie, who led the Chabad delegation. “People approach you and say, ‘You know the Chabad rabbi from my city did such and such for our community.’”

Jennifer Laszlo Mizrahi, president of The Israel Project, who hosted a reception at the GA, has a Chabad story that’s close to home. Her son Max, 6, learned the Aleph Bet at Chabad of Anne Arundel County, MD. “Some of his most prized possessions are his stuffed toy Torah, the shofar he made and other Jewish things from the Chabad events he attended. We are active members of 2 other synagogues but nothing has worked for our son like spending time with Rabbi and Mrs. Light.”

Notable among Chabad’s delegation were Rabbi Levi Shemtov, director of American Friends of Lubavitch who works closely with the UJC Washington office and local Chabad rabbis: Rabbi Levi Klein of Memphis and Rabbi Yitzchok Tiechtel of Nashville. They have both made important expansions this year, evidence of Chabad’s growth as force for Jewish identity in the South. The group hailed Rabbi Zushe Greenberg, Chabad’s long time representative to Solon, OH, who arrived at the GA in a different capacity. He served as the Jewish Federation of Cleveland’s GA 2007 Rabbinical Representative.

In the exhibit hall, director of the Rohr Jewish Learning Institute, Rabbi Ephraim Mintz was on hand at the JLI display to answer questions about Chabad’s popular adult education program now presented in over 250 locations around the world. UJC professionals who had personally attended JLI courses or heard about them from friends in their communities stopped by to check out the program in greater depth.
On the second day of the conference, Chabad’s impact on Jewish education was spotlighted when career kindergarten teacher Chana Sheinberger of the Chabad-run Hebrew Academy Community School in Margate, FL, was honored with the Grinspoon-Steinhardt Award for Excellence in Jewish Education. In the last two years, Chabad educators, like Malkie Herson, director of the Zimmer Preschool at Chabad Jewish Center in New Jersey, have seen their schools selected for participation in prestigious UJC sponsored education initiatives. Recent Jewish Federation awards have gone to Chabad representatives as far away as Toulouse, France.

Rabbi Eliezerie said, “UJC and Chabad both share a commitment for the welfare of Jews around the globe, enhanced cooperation between the two has the potential to greatly enrich Jewish life.”

Related Articles
View All
Chabad-Lubavitch Philanthropists Pledge to Sponsor 150 New Shluchim
The cavernous space at Pier 94, last night draped in black velvet with hundreds of tables elegantly decked out to serve 4,300 dinner guests, and…
Features
Tradition, Tradition!
Is Judaism too ritualistic?
Features
Batter’s Up . . . But Never on Shabbat
Infielder and pitcher Elie Kligman has been running the bases as long as he can remember. One of the top-ranked youth players in Nevada, the…
Features
Statistical Outlier: From Catholic Woman To Chasidic Scholar
Born to an Italian Catholic family in Binghamton, NY, Ani briefly attended Sunday school and took her first Communion, until dropping out of church, with…
Features
Above The Fray
Judaism is neither liberal, nor progressive, nor conservative. It is Judaism. It precedes all of these categories, cuts through them, and floats above them. The…
Get Inspiration to your inbox!
Newsletter
Join our weekly newsletter for inspiration and updates
Donate
Find Your Local Chabad Center
Subscribe
|
Log In
Chabad
About Chabad-Lubavitch
About Chabad Lubavitch
The Rebbe
Headquarters
Magazine
Magazine
News
News & Updates
In The Media
Impact
Social and Humanitarian
Social and Humanitarian
Education
Education
Community
Community