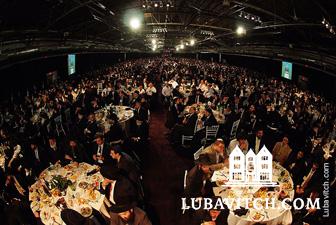 A view of the banquet at Pier 94. Photo by I. Bardugo for Lubavitch.com

All News
By Baila Olidort , NYC

The cavernous space at Pier 94, last night draped in black velvet with hundreds of tables elegantly decked out to serve 4,300 dinner guests, and more than a dozen 30-ft flat screens that allowed the guests to follow events on the podium, offered an illustration in brilliant contrast.

It was nearby at Pier 97 some 68 years ago, when the Chabad leader responsible for transferring the headquarters of the war-ravaged Chabad-Lubavitch movement from Europe to the U.S., disembarked the Drottingholm at the New York Harbor, to a small, waiting entourage of Chabad Chasidim.

The name Chabad was then barely known to anyone outside of the observant Jewish community. Upon his arrival in the U.S. Rabbi Joseph. I. Schneersohn sent a few of his Chasidim—there were only a few at the time—to begin the arduous task of seeking out Jewish children, and as was often the case, pleading with their parents to allow them to devote a few hours a week to Jewish education.

Few of the Chabad Shluchim at last night’s conference find themselves pleading with parents today. Instead, they are constantly expanding and building to accommodate ever growing numbers of Jewish children enrolling in their outstanding pre-schools, Hebrew schools and day schools around the world.

Back then, the Jewish world was still reeling from the Holocaust, and financial support was hard to come by. Last night’s guests included an eclectic who’s who in Jewish philanthropy among them Michael Steinhardt, Gennady Bogolubov, Eduardo Elzstain, Kenneth Abramowitz and many more.

Mr. Lev Leviev, the international diamond and real-estate magnate was guest speaker. The subject of a recent New York Times magazine feature, Leviev is the financial backer of the network of Chabad Ohr Avner schools in the CIS and beyond.

Earlier in the day, Shluchim mingled with lay leaders at a lunch at the Marriott Marquis in Times Square where Rabbi Yehuda Krinsky, Chairman of the Lubavitch educational and social services division, and Chairman of the Conference, spoke of the Lubavitcher Rebbe's guidance to Shluchim during the 50 years he served as his secretary. Rabbi Krinsky also reflected on the Rebbe's legacy of love for the individual, which today continues to animate all of the outreach activities by Chabad-Lubavitch Shluchim.

Mr. Daniel Rothschild is the President of the Jewish Federation of Switzerland and a dedicated supporter of his local Chabad Center. He came from Basel with Rabbi Wishedsky, Basel's Chabad Shliach, for the conference.

“We need the input of Chabad to make Jewish life more prosperous in Switzerland,” he told Lubavitch.com. Such sentiments were repeated all day, by lay leaders who had come with their Shluchim in admiration and support of the work of Chabad-Lubavitch.

Speaking in Hebrew, Leviev talked of his debt to Chabad-Lubavitch, its Rebbes and its Shluchim. “100 years ago,” he told his audience, “the Rebbe Rashab [Rabbi Sholom Dov Ber 1860-1920) sent a Shliach to Samarkand, to strengthen Jewish life there.” But the local community would not cooperate, and turned the young Chabad Chasid away.

“He knew he couldn’t return to his Rebbe empty handed,” said Leviev. “So he began to collect Jewish children, and formed a cheder, with 10 youngsters.”

Eventually, most of the Jews of Samarkand were lost through assimilation during the regimes of Lenin and Stalin. But those 10 children remained firmly rooted in their yiddishkeit.

“My grandfather was one of those 10,” said Leviev.

“If not for the Chabad Shliach at the time, I would not be standing here with you today.”

Related Articles
View All
Interview: Lev Leviev, Guest Speaker at International Conference of Chabad Shluchim
Two days after Ariel Sharon was elected Prime Minister back in 2001, he invited some of Israel’s leading economic experts and businessmen to his private…
Cracking the Talmud, New Curriculum Solves 500-Year Conundrum
Long the shibboleth separating the serious scholar from the also-rans, the skills needed to decipher a page of Talmud are being arranged into a comprehensive…
Get Inspiration to your inbox!
Newsletter
Join our weekly newsletter for inspiration and updates
Donate
Find Your Local Chabad Center
Subscribe
|
Log In
Chabad
About Chabad-Lubavitch
About Chabad Lubavitch
The Rebbe
Headquarters
Magazine
Magazine
News
News & Updates
In The Media
Impact
Social and Humanitarian
Social and Humanitarian
Education
Education
Community
Community