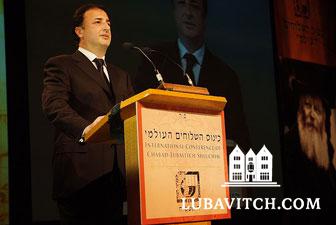 Guest speaker at Sunday night’s banquet session of the International Conference of Chabad-Lubavitch was Mr. Lev Leviev. An estimated 4,300 guests were seated in the hall at Pier 94. Among them were lay leaders and Chabad-Lubavitch Shluchim representing Jewish communities worldwide.

Mr. Leviev spoke warmly to the Shluchim about the impact they have on Jewish continuity. He also addressed many of his comments to the lay leaders, businessmen and colleagues at the dinner, imploring them to fulfill their role in their partnership with Chabad Shluchim.

Shortly before he arrived in New York for the Conference, Mr. Leviev was interviewed by Baila Olidort, the editor of Lubavitch.com. The interview is featured in full in Lubavitch International, which was presented to each guest at the banquet.

Two days after Ariel Sharon was elected Prime Minister back in 2001, he invited some of Israel’s leading economic experts and businessmen to his private ranch, to explore ideas for improving Israel’s then suffering economy.  After each of the guests put forth his ideas, Mr. Sharon turned to Lev Leviev.
Mr. Leviev suggested that Israel invest in Jewish education worldwide.

The individual who made international headlines when he single handedly broke the De Beers diamond cartel was not being facetious. It was rather an accurate reflection of Mr. Leviev’s sensibility that marries his passion for Jewish education to his penchant for smart business.

Israel takes the long vision and stakes its claim on the next generation of Forbes millionaires if it ensures that the Jewish child in Rio or in Rome has a healthy Jewish identity, says the Chairman of Africa Israel Investments, an international holding and investment company valued in the billions. When this child later succeeds in business, chances are he’ll invest in Israel before he does so anywhere else.

Lev Leviev, one of eight children, was born in 1956, in Tashkent, Uzbekistan, to Avner and Chana Leviev, prominent members of the Bukharan Jewish community.

In 1971 his family emigrated from Uzbekistan to Israel, where Lev attended the Chabad yeshiva, and soon turned to polishing diamonds. Today, he is on Forbes’s richest in-the-world list, and one of the leading philanthropists of Jewish education through the worldwide Chabad network.

Mr. Leviev, President the Federation of Jewish Communities of the CIS, lives in Israel with his wife Olga and their nine children.

Q. In his recent profile on you in the New York Times, Zev Chafetz quotes you as saying that you knew, from when you were six years old, that you were destined to be a millionaire. Was philanthropy part of that same early intuition?

Tzedaka was the substance of [Reb Avner] my father’s life, and that of my grandfather, Reb Zevulun. Chasidim who ran the underground Chabad yeshivas at the time would come regularly for all kinds of material/financial help; our address was well known to any Jew in need who came to Taskhent—so the spirit and practice of tzedaka were in the air I breathed as a child in my parents’ home.

Q. The raw material of your fortune is diamonds. Is that significant in any way?

Let’s just say that people who don’t know diamonds will not appreciate the potential of the gelem [uncut diamond]. The Rebbe saw diamonds as a metaphor for the Jewish soul. When you know its value, you can see beneath the surface. I try to look at every Jew the way I look at a rough diamond.

Q. “The Rebbe’s values are your values,” you said. What are those values?

Jewish education. The Rebbe saw it as the only answer to the future of the Jewish people, and that has become very evident in Russia and the other FSU countries. Without the schools and yeshivas that Chabad shluchim have established in this region over the last 18 years, we’d most certainly have lost an entire generation of Jews. Q. Would you like to see any of the business models you employ in your work applied to the work of Chabad shluchim?

Just as in business, the CEO must look objectively at his performance, I think shluchim need to do the same, and when a shliach’s responsibilities grow, and the demands on him exceed his energy, he needs to consider recruiting another shliach to help him meet the demands of his shlichus. This would also allow the shliach to turn his attention to those areas where he can succeed. Shlichus is not the kind of enterprise that can be compromised on any personal account.

Q. What, in your opinion, is the greatest problem that plagues the Jewish people today?

Q. In the U.S. a child in a Jewish day school is usually there by the choice of his parents, who are often paying a hefty tuition. In Russia, parents are rather given incentives to enroll their child in a Jewish school. So the average Jewish child in an Ohr Avner school goes home at the end of the day to a completely secular environment where the parents don’t invest in any way in their child’s Jewish development. Doesn’t that frustrate everything you’re trying to do?

Quite the contrary. We see that the children seem to inspire their parents’ interest. The more they become excited about what they learn, the more the parents take an interest in Jewish life and the Jewish community.

The Ohr Avner schools invest a lot of resources in programming designed to draw parents into the world of Jewish education.

Secondly, even in those cases where parents don’t show an interest, just having the child in a Jewish school is a significant achievement. It means that for this particular child, intermarriage is no longer a given.

Multiply that by the tens of thousands of children who’ve been through our shools over the years, children who say Shema in the morning, children who will marry Jewish. There’s nothing frustrating in that, only a lot of promise.

Q. What is the most rewarding experience you’ve had from your philanthropic activity?

There are thank G-d, many great moments and rewards. Occasionally, I like to take my family and my children and travel to visit shluchim—specifically those in some small, faraway city in the FSU and see how sometimes in as little as three years—they turned a community that had nothing in terms of Jewish activity, into a place that is alive with yiddishkeit.

It’s really only something that is achieved through the strength of the Rebbe’s blessing. There’s no other explanation, at least no rational one, for how a young couple without the language and without experience, can achieve such a dramatic change.

If you would like to receive a copy of Lubavitch International, email us here with your mailing address.