On Tour in the U.S: Two Rabbis and A Barrel of Kosher Pickles 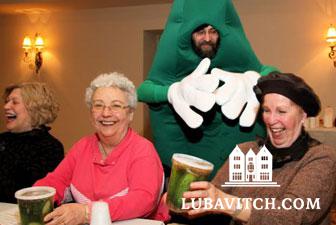 When Lubavitch.com began its kosher series, we thought we'd stop at three. But who can resist a good kosher pickle? This then, is the fourth article in our kosher awareness series.

(lubavitch.com/LNS) The recipe is a secret but Rabbi Mendy Margolin will reveal the trick to a good kosher pickle—no authentic kosher pickles contain vinegar. When pressed, Rabbi Shmuel Marcus, Chabad representative in Cypress, CA, is quick to assert that “there is no exact recipe—it is an art.”

The Traveling Kosher Pickle Factory was Rabbi Marcus’ brainchild. Visits with an 86-year old pickle-maker, rounded off with Tefillin and the crunch of home-made kirbies (not necessarily in that order), sparked the idea. Rabbi Marcus figured that the public school students he taught at Hebrew High would love to learn pickle-making. The opportunity would allow him to surreptitiously slip kashrut lessons in as well.

What he didn’t count on was the interest the eclectic program would engender among the teens’ parents. Over 200 phone calls poured in as adults vied for the opportunity to pickle their own cucumbers. Organizers had to turn people away as the program spread like wildfire across Southern California.

The course’s layout is similar to that of the popular Living Legacy Series, designed to teach children about upcoming holidays through the Shofar and Matzah factories and the Olive Oil Press. Unlike the Living Legacy, though, this program is designed for an older audience. Rabbi Marcus discovered Rabbi Margolin when the latter presented a Shofar Factory for his Hebrew High students. The two clicked and Rabbi Margolin soon became the second Pickle Rabbi.

Since it began in 2005, 3,000 people have prepared personalized pickle jars. During the hour-long presentation, participants choose their own spice combinations and tartness. According to Rabbi Marcus, adults prefer the deli pickle, associating it with traditional Judaism, much like a bagel shmeared with cream cheese and lox. Word of its popularity quickly leaked across the country.

Following requests, the Rabbis launched a national tour with 12 shows scheduled through the end of March. The pair plan to “take the show big time” expecting it to reach 30,000 people over the next three years.

One recent stop was at Hofstra University in New York. Rabbi Shmuli Lieberman welcomed the Pickle Rabbi and students on a snowy Tuesday night. Although the snowstorm left some in a pickle, the students who braved the weather loved the hands-on approach and the fact that they could make their own jar of pickles to bring home.

The Pickle Rabbi made another stop on Long Island the following day. This time Rabbi Margolin regaled the regular Lunch and Learn crowd in Mineola with pickle facts and tart one-liners. Rabbi Anchelle Perl, director of Chabad in this Long Island city, says the program had special appeal for Wednesday’s crowd. Besides the joy a simple pickle inspires, members were also celebrating their return to the newly-remodeled ballroom following a devastating flood in July of last year.

The crowd of people learning the rudiments of pickles were animated with interest and enthusiasm. Individuals debated the merits of half-sours (pickles left to marinate for three days) versus sours (pickles preserved for a week or more). Rabbi Perl says the program’s success was apparent as participants proudly balanced their jars on their way out. He overheard one individual remark that Rabbi Margolin, “got the message of kosher out without stuffing it down anyone’s throat.” Another Mineola resident appreciated “the nice thing about Chabad: it is open to individual creativity.”

Through humor and history, the Rabbis explain that kosher “is not a stylistic choice,” but rather, “something G-d wants us to do.”

One aspect the Rabbis emphasize is that sixty to seventy percent of what is in an average shopper’s cart is already kosher. Rabbi Marcus tells his audience that they are “eating more kosher than they think.” The goal, he says, is for participants to leave more kosher-conscious through a practical demonstration of kosher laws and symbols. In fact, he proudly notes, some participants have been so inspired by the unique approach, they have committed themselves to keeping kosher.
“It’s all about keeping it kosher,” concludes Rabbi Margolin, on the program’s broader goal. With five million pounds of this popular snack consumed daily, there seems no better way to reach an audience.

Related Articles
View All
Good for the Palate, Good for the Soul: Kosher Cuisine Grows Up
(lubavitch.com/LNS) “I came to Iowa to campaign for Barak Obama, and ended up putting on tefillin for the first time.” Rabbi Yossi Jacobson recounts this…
Kosher Cooking Bible Turns Thirty, Inspires Lifestyle Changes
(Lubavitch.com) Thirty years since it was first served up, Lubavitch women’s kosher cookbook has sold 160,000 copies worldwide. That’s no small potatoes. But it's for affecting…
Features
Remembering The Struggle for Russian Jewry
Ninety-three years ago today, Rabbi Joseph I. Schneersohn, sixth Lubavitcher Rebbe, was freed from Soviet-imposed exile.
Features
Wordsmith: Tamim
The tamim is unflappable. He does not sway with the winds of change, nor bend to meet the expectations of others. He is a simple…
Features
Remembering Rebbetzin Chana: Jewish Feminine Role Model
Rebbetzin Chana Schneerson, a feminine role model of Jewish activism and proponent of Jewish scholarship, mother of the Lubavitcher Rebbe and wife of Rabbi Levi…
Features
Defying Religious Stereotypes on Israel’s College Campuses
By the time Zehavit Mohager, a psychology student, began her studies at the University of Haifa at age 23, she had already completed her army…
Get Inspiration to your inbox!
Newsletter
Join our weekly newsletter for inspiration and updates
Donate
Find Your Local Chabad Center
Chabad
About Chabad-Lubavitch
About Chabad Lubavitch
The Rebbe
Headquarters
Magazine
Magazine
News
News & Updates
In The Media
Impact
Social and Humanitarian
Social and Humanitarian
Education
Education
Community
Community