Netanyahu to Chief Rabbi Lazar: Some of our friends are naïve 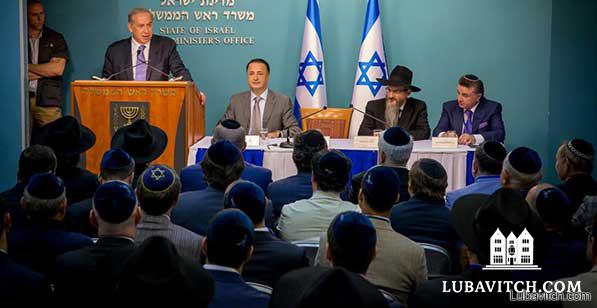 Prime Minister Benjamin Netanyahu met Sunday with a delegation of representatives of the Russian Jewish Community, headed by the chief rabbi of Russia, Rabbi Berel Lazar and Mr. Lev Leviev, President of the Federation of Jewish Communities of the CIS (FJC).

The delegation has asked to deliver, through the Prime Minister, a message of solidarity with the people of Israel, contending with this flare-up of terrorism. “The delegation arrives during these troubled times, in order to show the world that now is the time to come and visit the country,” said Mr. Leviev during the meeting.

Rabbi Lazar added that “we have come in these dire times to strengthen the people of the holy land. All of Russia’s Jewry is praying for you. We are here to tell you that we are standing by you in these hard times”. During the last few days the delegation visited Rachel’s Tomb near Bethlehem, The Cave of Machpela near the city of Hebron and the western wall, where the delegates visited the famous “Western Wall tunnels.” As part of their tour, the delegates met with the soldiers stationed at those sites working to restore order. In the course of their visit, the delegates witnessed riots in the area.

The delegation consists of fifty rabbis, leaders and head of communities, as well as business people from all over Russia, including the cities of: Rostov, Kaliningrad, Omsk, Krasnoyarsk, Smolensk, Samara, Tomsk, Saratov, Khabarovsk, Krasnodar, Sochi, San-Petersburg, Ufa, Moscow, Novorossiysk, Veliky Novgorod. The communities span the Western Russian border with Finland, all the way to the eastern border with Japan.

At the Prime Minister’s office, members of the delegation were warmly received by Mr. Netanyahu. “Lev Leviev, President of the FJC, your work in strengthening the Jewish identity, our heritage, the affiliation towards and Israel and Jewish education is highly important. I would also like to thank Michael Mirilashvili, who has joined these efforts and all the members of the delegation headed by Chief Rabbi of Russia, Rabbi Berel Lazar.”

Related Articles
View All
In Conversation: Russia’s Chief Rabbi On Russia and the Jews Today
This is a vastly different Russia from the one you found when you arrived here in 1990. You came with your wife from a western…
Netanyahu Speaks to JLI’s Mission To Israel
(lubavitch.com/lns) A contingent of 300, from Brazil, Australia, Finland, the US and Canada, who spent months studying Israel’s enduring centrality to Judaism, has just returned…
Interview: Lev Leviev, Guest Speaker at International Conference of Chabad Shluchim
Two days after Ariel Sharon was elected Prime Minister back in 2001, he invited some of Israel’s leading economic experts and businessmen to his private…
Israel’s President To Chabad: You Give Life to the Living
{}
Terror in Jerusalem and the Danger of Ambivalence
I howled loudly because even Shakespeare, lyrical master that he was, knew that some offenses are so odious they cannot be contained in words. This…
Get Inspiration to your inbox!
Newsletter
Join our weekly newsletter for inspiration and updates
Donate
Find Your Local Chabad Center
Chabad
About Chabad-Lubavitch
About Chabad Lubavitch
The Rebbe
Headquarters
Magazine
Magazine
News
News & Updates
In The Media
Impact
Social and Humanitarian
Social and Humanitarian
Education
Education
Community
Community