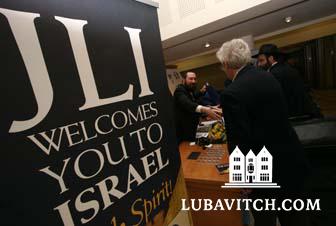 (lubavitch.com/lns) A contingent of 300, from Brazil, Australia, Finland, the US and Canada, who spent months studying Israel’s enduring centrality to Judaism, has just returned from the ultimate field trip.

Like art majors exploring the Louvre, the six buses that filled with graduates of Chabad's Rohr Jewish Learning Institute’s “The Land and the Spirit: Israel – Why We All Care” course arrived for their Israel mission equipped with the background knowledge to savor the sites.

Offered as a culmination of the six-week JLI course, the mission furthered the class’s goal to explain how a tiny sliver of land came to be “like no other on earth.” The course examined Israel’s roots in the psyche of the Jewish people from Abraham’s footsteps through today’s headlines. Continuing the journey in Israel seemed a natural follow-up for participants from many of JLI’s 250 satellite sites.

“Our mission differed from standard tourist and philanthropic trips because of its focus on education,” said Rabbi Efraim Mintz, director of JLI. “It brought the ideas discussed in the course to life.”

As the wind kicked up along mountain ledges mentioned in the Torah, the group delved into passages that referenced those peaks. Where great ones walked and studied, battled and prophesized, JLI students were offered ‘you are there’ moments. They flipped through their “mission companion” texts to study and the writings of sages, kings and prophets who walked and studied, battled and prophesized on those very spots.

“Until now I could not have comprehended the extraordinary responsibility of what it means to be Jewish,” said Ken Levin at the banquet on the final night of the ten day journey. Realizing he was the only one at the JLI class in Arizona’s Scottsdale Jewish Center not to have visited Israel compelled him to join, along with wife Linda, daughters Jessica and Nicole.

“In a single week, I have begun to understand what until now has been a lifetime of being Jewish without context.”

Words of the past that hail Israel’s importance to the Jewish people tore free of their printed boundaries when JLI mission spent an evening in the company of 500 young Israeli soldiers.

“You could feel the passion and commitment to Israel’s future at every table,” said mission coordinator Rabbi Yoni Katz. “Am Yisrael Chai,” the rousing chant that celebrates the Jewish nation’s endurance – throughout it all – rose from 800 voices at the close of the evening.

Emotional moments kept coming and ricocheting off the texts. Having JLI teachers – Chabad representatives, all – leading groups from their Chabad centers eliminated any need for ice breaking. Groups, like the 19 Brazilians who came with Rabbi Avrohom Steinmetz from Beit Chabad of Brazil, were open to the experience from the moment they stepped off the plane.

“The people were transformed. They don't stop talking about the trip,” raved Rabbi Steinmetz.

Yvonne Desouza, who accompanied the group from Chabad of Northwest New Jersey led by Rabbi Mordechai Baumgarten, felt a tug at the soul strings at the Cave of the Machpela in Hebron, Masada, the Dead Sea, but it was Shabbat at the Western Wall that brought her “tears, happiness and peace.”

JLI mission off-the-beaten-track approach engaged Harriet Price of Chicago. “We saw many sights and enjoyed experiences that we did not see or have in the past.”

It took Len Weksler of La Costa, CA, 78 years to make it to Israel. Looking back, Weksler is glad that his first steps in Israel as part of the JLI mission.

“This was the trip of a lifetime for me. It didn't enter my mind until I was on the plane flying home that I indeed had seen the land but equally important I had enjoyed and felt the spirit of the land.”

Related Articles
View All
Education
Remembering Rebbetzin Chana: Jewish Feminine Role Model
A feminine role model of Jewish activism and proponent of Jewish scholarship, is being remembered today, on her yahrzeit.
Education
Beginning With Shabbos
Start the children’s school day right, and the rest will follow.
Education
Jewish In Berlin And Scoring High
If Jewish parents in Berlin worried that sending their children to a traditional Jewish school would leave them with compromised scholastics in math, history, and…
Education
Florida Schools Set for Silent Start to the Day
Landmark bill passed with bipartisan support will mandate a moment of silence for 3 million public school kids.
Get Inspiration to your inbox!
Newsletter
Join our weekly newsletter for inspiration and updates
Donate
Find Your Local Chabad Center
Subscribe
|
Log In
Chabad
About Chabad-Lubavitch
About Chabad Lubavitch
The Rebbe
Headquarters
Magazine
Magazine
News
News & Updates
In The Media
Impact
Social and Humanitarian
Social and Humanitarian
Education
Education
Community
Community