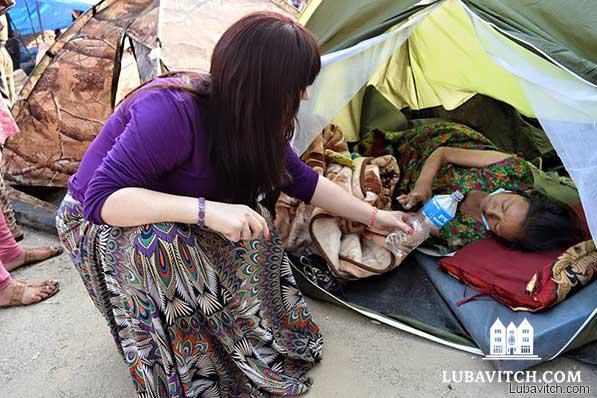 Chani Lifshitz, Chabad representative to Nepal, assists a dehydrated Nepali. Below: Bringing supplies and in consultation with medical staff.

Still reeling from last month’s major earthquake, Nepal was struck yet again Tuesday, this time by a 7.3 magnitude earthquake. The quake and its aftershocks, which continue this morning, came as many rescue teams already returned home from their missions to help Nepal following the last earthquake. Close to a hundred are confirmed dead; thousands more were wounded, and many buildings that managed to survive the last earthquake have now collapsed, leaving a country in trauma and shock.

At the Chabad House in Nepal’s capital of Kathmandu—which has become a crisis center –food and supplies are organized daily to be delivered to local Nepalis still devastated from the first quake, volunteers were immediately dispatched to help survivors of the second.

“The scenes from the last earthquake returned, as thousands poured out into the streets looking for a piece of land to rest their tired bones,” reports Chani Lifshtiz, Chabad representative to the country. “The wounded are being rushed to hospitals through the streets, as we serve hot meals to anyone who is hungry.”

Israelis who remained in the capital to assist in local relief efforts made their way back to the Chabad House to sleep in the large courtyard. Chabad representatives began updating lists of the few Israelis that remained and they are in touch with. By morning most were accounted for.

Rabbi Chezki Lifshitz has been in touch with people from remote villages near the Himalayan mountainous region, where the situation is particularly grim. Chabad is arranging waterproof tents in these villages, to provide locals with shelter from the rain season which begins at this time.

“Things were finally getting a little better here,” says Chani. “This second earthquake is devastating.” Chani is walking the streets giving food to the hungry, and bottled water to prevent survivors from becoming dehydrated.

“The wounded are in the streets, people are baking in the blazing sun. They have no house to return to as they mourn family, friends and neighbors who they lost in the disaster.”

Related Articles
View All
Lag B’Omer After The Earthquake
This year, Lag B’omer comes at a difficult time for Chabad of Nepal. While sitting down to create her poster, Chani’s husband, Rabbi Chezki was…
Nepal Update
After days of exposure to the elements following Saturday’s 7.8 earthquake, 25 Israeli backpackers were airlifted to safety by Rabbi Chezki Lifshitz and volunteers who…
Nepali Locals, Travelers, Find Food, Solace at Chabad
“Our greatest worry now is to make sure that anyone who comes to the Chabad House should have a hot meal,” the Chabad representative says.
Nepal Jewish Leaders Appeal For Help As Crisis Deepens
“The country is devastated, buildings that once proudly stood are now rubble, streets that once were bustling are now deserted,” says the Chabad representative.
Nepal Earthquake Survivors Flock To Chabad
In the midst of Shabbat morning prayers at the Chabad House in Kathmandu, Nepal, a 7.8 magnitude earthquake hit the country. The death toll is…
Get Inspiration to your inbox!
Newsletter
Join our weekly newsletter for inspiration and updates
Donate
Find Your Local Chabad Center
Subscribe
|
Log In
Chabad
About Chabad-Lubavitch
About Chabad Lubavitch
The Rebbe
Headquarters
Magazine
Magazine
News
News & Updates
In The Media
Impact
Social and Humanitarian
Social and Humanitarian
Education
Education
Community
Community