Music, Light, and Love for US Troops 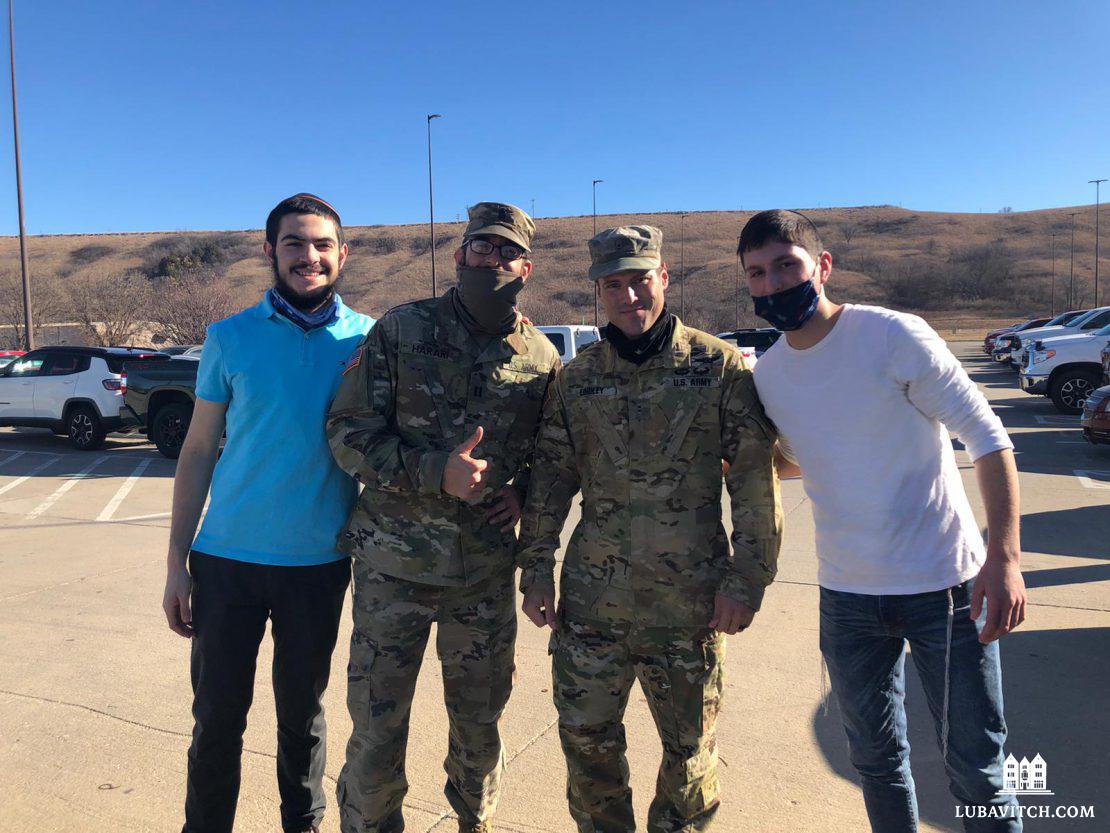 It began with a little music.

Chaplain to the Iron Rangers and Rabbi on Post at Fort Riley Army Installation in North Central Kansas, Rabbi Michoel Harari was preparing for a Chanukah unlike any before it. Most of his men would be spending the holidays on the base, instead of with family, due to COVID travel restrictions. There are approximately 15,000 active duty service members, 18,000 of their family members, and 5,600 civilian employees assigned to Fort Riley. Around 280 are Jewish.

The situation called for some entertainment. The rabbi reached out to eighteen-year-old Duvy Burston, a former camper at the Yeshivah Outdoor Adventure program Harari directs in the summers. A budding singer and songwriter as well as a full-time yeshivah student, Duvy has released two singles, with a third set to come out next month. “Rabbi Harari asked me to lead a kumzitz and give a concert for the soldiers. I’m so excited to take part in all he does for the Fort Riley community,” Duvy told Lubavitch.com.

Duvy’s parents, Rabbi Pesach and Chana Burston, directors of Chabad of Orange County in Chester, New York, were excited, too. “I thought, wouldn’t it be nice to send some treats to the soldiers to thank them for their service and let them know we care?” Chana says. So she got to work, posting on social media to crowdfund donations, supplies, and cards. The response was immediate—within a few hours, she had the means to create fifty care packages. But Chana wasn’t satisfied: “Fifty is a small number when there are over 15,000 soldiers on the base.”

Looking for a larger audience, Chana put a message on a WhatsApp group for CTeen directors in the USA. “We’ll make ten packages,” came a response from Los Angeles. “We can do sixty,” said Donna, the director of CTeen in Yardley, Pennsylvania. Tens of CTeen chapters volunteered to raise money, and purchase supplies. Then, each chapter got together, observing COVID protocols, and created handmade cards, decorated Chanukah socks and other gifts, and packed Chanukah treats for the men and women at Fort Riley.

In Yardley, Melanie Harrison, mom of a first-grader at Abrams Hebrew Academy, heard about the campaign and felt a jolt of recognition. Her father had been a captain stationed at Fort Riley, and she was born in the army hospital there. “My dad installed a giant freezer and helped his Jewish colleagues get kosher meat,” she says. Melanie and her family gladly made packages to add to Donna’s shipment.

On Tuesday, Duvy and his friend, Yitzy Zelenko, another former YOA camper who has assisted at Fort Riley holiday events in the past, flew from New York to Kansas, where they met with the approximately one thousand soldiers living in the Fort Riley barracks. “These are young, unmarried soldiers, some of whom have returned from a two-year deployment abroad and then been locked down on the base. They haven’t seen their families in years and that’s a real challenge,” Rabbi Harari says. The yeshiva boys and the soldiers schmoozed, and Duvy led some songs on his guitar.

On Thursday evening, Jewish soldiers, army personnel, military families, and civilian staff gathered for a Chanukah party. They lit the first light on a giant menorah, enjoyed latkes and donuts the Army and the USO (an organization that serves American soldiers during their time in uniform) ordered all the way from Brooklyn, and sang, clapped, and danced as Duvy performed his own original songs and a bevy of Chanukah and traditional Jewish numbers. “How cool is it to celebrate Chanukah by attending the first ever Jewish concert on a US army installation?” a soldier remarked.

When it was over, Duvy, Yitzy, Rabbi Harari, and the six Harari children distributed over three hundred care packages and many more handwritten cards shipped to the base from CTeen chapters and Chabad communities all over the country.

“To say our base is in the middle of nowhere is an understatement. Yet here we are flooded by love from people who jumped at an opportunity to do something for our troops,” the rabbi says.

The soldiers and Rabbi Harari compiled a video montage of thanks. As one Iron Ranger put it, “It’s heartwarming to know that kids all over this nation went out of their way to send their love and support and make sure we too feel the Chanukah joy. Thank you to all the Chabad teens who participated.”

Related Articles
View All
Military
Chabad Rabbi Becomes Colorado National Guard’s First Jewish Chaplain
At a small, socially distanced ceremony held last week in Colorado, Rabbi Yerachmiel Gorelik made history as he became the Colorado Army National Guard’s first-ever…
Military
From Air Force to Arizona Emissary
If I ever had any doubt that events in my life are divinely ordained, that certainly is a tapestry showing that I am, now, exactly…
Military
Video: Rabbi Jacobson’s Address To U.S. Military Chaplaincy
In response to numerous requests by readers who've asked to hear Rabbi Y. Y. Jacobson's speech featured in this Lubavitch.com story, Chabad Rabbi First Rabbi…
Military
Chabad Rabbi First Rabbi Ever to Address U.S. Military Chaplaincy
(lubavitch.com/lns) In a speech hailed by one priest as the most inspiring talk since Martin Luther King Jr., Chabad Rabbi Yossi Jacobson addressed the Chief…
Get Inspiration to your inbox!
Newsletter
Join our weekly newsletter for inspiration and updates
Donate
Find Your Local Chabad Center
Subscribe
|
Log In
Chabad
About Chabad-Lubavitch
About Chabad Lubavitch
The Rebbe
Headquarters
Magazine
Magazine
News
News & Updates
In The Media
Impact
Social and Humanitarian
Social and Humanitarian
Education
Education
Community
Community