Mezuzahs for Maryland’s Jews in Uniform 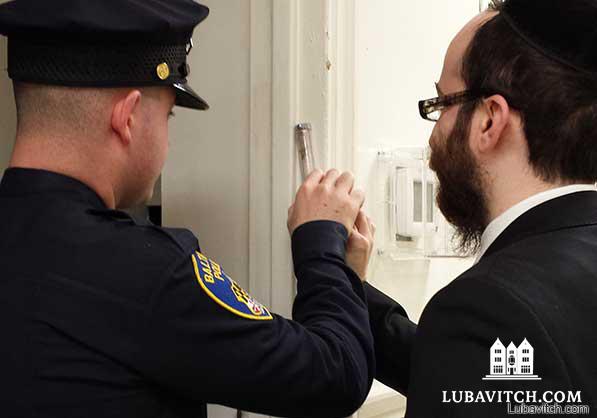 A police officer and Rabbi Chesky Tenenbaum, director of JUSA of MD, affix a mezuzah.

“Protecting those who protect us,” is the tagline of a new project providing mezuzahs free of charge to Maryland’s Jewish men and women in uniform.

Sponsored by the Jewish Uniformed Service Association of Maryland (JUSA of MD), an affiliate of Chabad-Lubavitch of Maryland, the campaign, which began earlier this month, is also fostering community awareness and appreciation for the role of Maryland’s police and fire officers.

“The mezuzah is a sign of G-d watching over us. It is important for the police officers, firefighters and members of the military – those who protect the citizens of our city on a day-to-day basis, to have the benefit of the mezuzah,” says Rabbi Chesky Tenenbaum, director of JUSA of MD.

The community’s financial support for this project, as well as invitations to social and holiday events organized by the JUSA of MD for some 300 Jewish men and women in uniform, are beginning to fill a void that many Jewish officers, especially those living out in rural areas removed from the community, have been feeling.

Yakov Schultz, an MDDF forensic nurse, speaks for others who felt excluded from the Jewish community. JUSA of MD “gives us a community,” he told the Baltimore Jewish Times.

Donated by the Jewish community, the mezuzahs are affixed at no charge to the officers’ homes and office. Included as well is a free-of-charge service to have a scribe examine and repair old mezuzahs.

“I hope this project will bridge the gap that Jews in uniform have been feeling, and will help the lay community understand and be supportive of  those who risk their lives on a daily basis,” the rabbi says.

Related Articles
View All
Door-to-Door Mezuzah Service
Check your “Jewish door bell!” That’s the message on Israel radio and bus ads from Chabad in Israel. While most homes in Israel have a…
Mezuzah Mystery
(lubavitch.com) According to a new report leaked Friday by London’s Jewish Chronicle, properties bearing mezuzahs on their doorposts are selling for 10,000 pounds more than…
Catholic Hospital Hangs 270 Mezuzahs on Facility, A California First
When Providence Tarzana Medical Center looked to become the first San Fernando Valley hospital to hang mezuzahs in all patient areas, they turned to Chabad…
Chabad Places Mezuzahs on Doors Of House Majority and Minority Leaders
A Mezuza in Place of a Swastika, Says Chabad Rabbi At Columbia University
When the door of Elizabeth Midlarsky, a Jewish professor in Columbia University was recently defaced with a swastika, Yonah Blum, the Chabad representative at Columbia…
Mezuza Marathon
In most places, it is possible to identify a Jewish residence by the mezuzah on the doorpost. Not so in parts of the FSU, where…
Get Inspiration to your inbox!
Newsletter
Join our weekly newsletter for inspiration and updates
Donate
Find Your Local Chabad Center
Chabad
About Chabad-Lubavitch
About Chabad Lubavitch
The Rebbe
Headquarters
Magazine
Magazine
News
News & Updates
In The Media
Impact
Social and Humanitarian
Social and Humanitarian
Education
Education
Community
Community