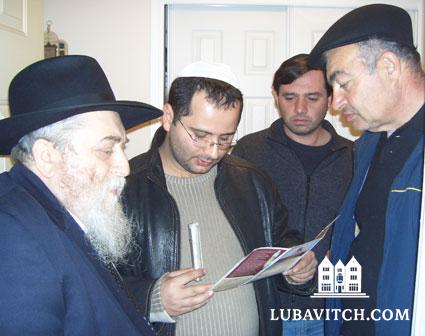 (lubavitch.com) According to a new report leaked Friday by London’s Jewish Chronicle, properties bearing mezuzahs on their doorposts are selling for 10,000 pounds more than their equivalents without the parchments.

Real estate agents throughout all areas of the city have noticed the surge since October, when homes and apartments with mezuzahs have garnered considerably more. Though it is unclear why this phenomenon exists, retailers across London have also seen an increase in mezuzah sales—and not only to Jewish customers.

While that turned out to be a Purim spoof, here in the U.S., Rabbi Dovid Okunov, associate director of Friends of Refugees of Eastern Europe (known as F.R.E.E) observed growing interest in mezuzah in the Tri-State area. His Brooklyn based office has fielded calls for over 200 mezuzahs in the last month, where usually they sells 50.

“I believe that many of those whom we visited have been interested in kosher mezuzahs, because they want to be more protected physically, and connected spiritually,” explains Okunov.

“Also, the current economic crisis has been a wake-up call for many young Russian-Americans that it may be a good time to connect in a more spiritual way.”

Rabbi Chaim Mordechai Hodakov served as director of Merkos L'inyonei Chinuch, Machne Israel, and the Kehot Publishing Society for 40 years. An immigrant from Russia himself, Rabbi Hodakov believed strongly in making mezuzahs available to newcomers—but with a catch. “He told my father,” recalls Okunov, “that he must charge a minimal amount for each mezuzah [if the family could afford it].”

Following the Lubavitcher Rebbe's call in 1974 to raise awareness of mezuzah, the F.R.E.E office provided them without charge, Rabbi Hodakov believed that “the immigrants would appreciate the mitzvah more if they paid out of their pockets for it. If they do something, it will mean something.”

In Coney Island, Yelena Furman had Okunov affix four mezuzahs to her Brooklyn apartment. Though her family, and particularly her brother Russ, has been involved with F.R.E.E since their 1988 arrival in America, it was only recently that she felt the need to have mezuzahs in her own home. “I once had a case that I purchased in Israel when I went with Birthright, but the parchment wouldn’t fit,” Furman says. “Now when I had the rabbi come, he explained everything and did the blessing for me. Without that, I don’t think it would have had much meaning.

“I have been telling all my girlfriends about it. Many of us in the Russian community didn’t even know they were accessible before now. But we are definitely interested.”

Purim or not, a mezuzah on the doorpost has its appeal . . .