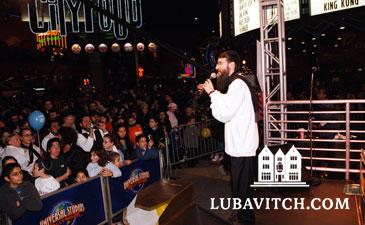 Long famous for lighting giant menorahs in public squares, Chabad Lubavitch has, in recent years, taken the experience a step further with mega-events that bring the light of Chanukah to thousands in amusement parks, on stage and screen.

Last year, 8,000 people joined Chabad of the Valley at California’s Universal CityWalk for a concert and menorah lighting, and this year even more are expected, especially since Los Angeles Mayor Antonio Villaraigosa will participate in the menorah lighting. More than 10,000 pack McArthur High School Football Stadium in Hollywood, FL, at a Chabad of South Broward event. Another swarm is expected when Chabad of Wellington, FL, offers a full program at Lion County Safari. In the Jewish Children’s Museum’s opening week of “Maccabees” over 4,000 children ducked into the live adventure show’s time-machine set, and before the holiday is out another 5,000 are expected to be transported back to the sights and sounds of the Chanukah miracle. “I didn’t expect the shows to sell out this quickly,” said Zevi Steinhauser, the Museum’s Director of Public Relations.

Planning events of this magnitude takes teamwork, say Chabad representatives. In Florida, Wellington’s Chabad Rabbi Menachem M. Muskal said dozens of his colleagues helped with event logistics and distributed some 15,000 flyers to Jewish schools, bookstores and eateries; the Palm Beach Post stepped up as a major sponsor. Divvying up the responsibilities for food, entertainment, and event planning keeps Chabad of the Valley’s CityWalk event on track. Crews of rabbinical students pulled round the clock shifts to build the elaborate sets for “Maccabees” with miraculous results. A crimson velvet draped throne room where evil King Antiochus holds court is thrilling and threatening, and playgoers enter a room size cave – convincingly constructed from burlap and wire – to hide with the Maccabees and secretly study Torah.

When CityWalk’s Jumbotron flips on and Jewish singing superstar Avraham Fried appears on screen where Hollywood’s most famous faces are usually broadcast, Chabad of the Valley will again be a part of changing the perception of Chanukah from Judaism’s second-best alternative to December’s holiday madness into a source of Jewish pride. “Chanukah represents the triumph of light over darkness, good over evil. Judaism enjoins us to share this positive and enlightening message with the world at large and what better venue to do that at than the famed Universal City Walk,” said Rabbi Joshua B. Gordon, executive director of Chabad of the Valley.  Jewish children, so swamped with alluring jingle of the holiday season, appeared to get the message during a “Maccabees” performance. Project coordinator Dovid Weinbaum overheard a pint-sized show goer tell the menacing Antiochus: “We are not going to listen to anything you say! We are going to learn Torah!”

Even before Chabad of the Valley’s summer camp ended, Family Circle magazine called publicity organizer Rabbi Yanky Kahn to include CityWalk Chanukah information in their winter things-to-do article. Several times an hour, KRLA 870, a news-talk station, exhorts listeners to “come celebrate Chanukah at City Walk” as part of their Info to Go announcement sequence. It helps that Chabad has chalked up five years of successful City Walk Chanukah events, but they’ve seen the benefits of judicious advertising. Last month, when radio-host Dennis Prager announced on his show that he’d be speaking at Chabad of the Valley, “all the phones started ringing, you couldn’t get an open line.”

The opportunity of huge events as these is, says Rabbi Muskal, “to present itself to many people and many new faces,” and hopefully, spark interest. “The ultimate goal is to a develop personal rapport with families and individuals, so they will come back and further explore their Jewish heritage.” This Chanukah, thousands will meet Chabad on neutral territory, a comfortable zone for the synagogue shy, and take that crucial first step.

Related Articles
View All
Chanukah Photo Feature
Chabad reaches millions with the light and warmth of Chanukah as thousands of menorahs illuminate public spaces in cities and towns nationwide and around the…
Menorah: A Symbol of Religious Freedom
When the U.S. Supreme Court ruled that placing Chabad-owned menorahs in public spaces did not violate the establishment clause, it set a slab of precedent…
News Briefs: Peaceful Protests in Favor of Public Menorah
The citizens of Fort Collins, CO responded with a campaign of support when Rabbi Gorelick, director of the Chabad Jewish Center of Northern Colorado, was…
As the Last Day of Chanukah Nears, Lights Grow More Intense
Cautiously conservative estimates put the number of Chabad’s Chanukah events and menorahs worldwide at 2,600. This number, based on events listed on Chabad websites and…
Holiday & Shabbos
Lag B’Omer Innovation Under Lockdown
On Monday evening at 18:00 sharp, 45,000 individuals tuned into the livestream at 18for18.com.au. Narrated and presented by children and individuals from Jewish communities across Australia…
Holiday & Shabbos
A Shabbat Dinner for Wine Country Survivors
With California’s wine country reeling from this week’s horrific wildfires—the most destructive of their type in California’s history—Chabad of Sonoma County is rallying the forces…
Holiday & Shabbos
Moving Out
To get her sukkah to Inwood Park in Manhattan on Sunday, artist Shaina Denburg detached its walls. But even in pieces, it didn’t fit in…
Holiday & Shabbos
A First for Sukkot in Shanghai
Rabbi Shalom Greenberg has celebrated Sukkot in Shanghai every year since 1998, but this year’s the first that he’s been able to legally import the…
Get Inspiration to your inbox!
Newsletter
Join our weekly newsletter for inspiration and updates
Donate
Find Your Local Chabad Center
Chabad
About Chabad-Lubavitch
About Chabad Lubavitch
The Rebbe
Headquarters
Magazine
Magazine
News
News & Updates
In The Media
Impact
Social and Humanitarian
Social and Humanitarian
Education
Education
Community
Community