A college student with special needs is breaking the mold 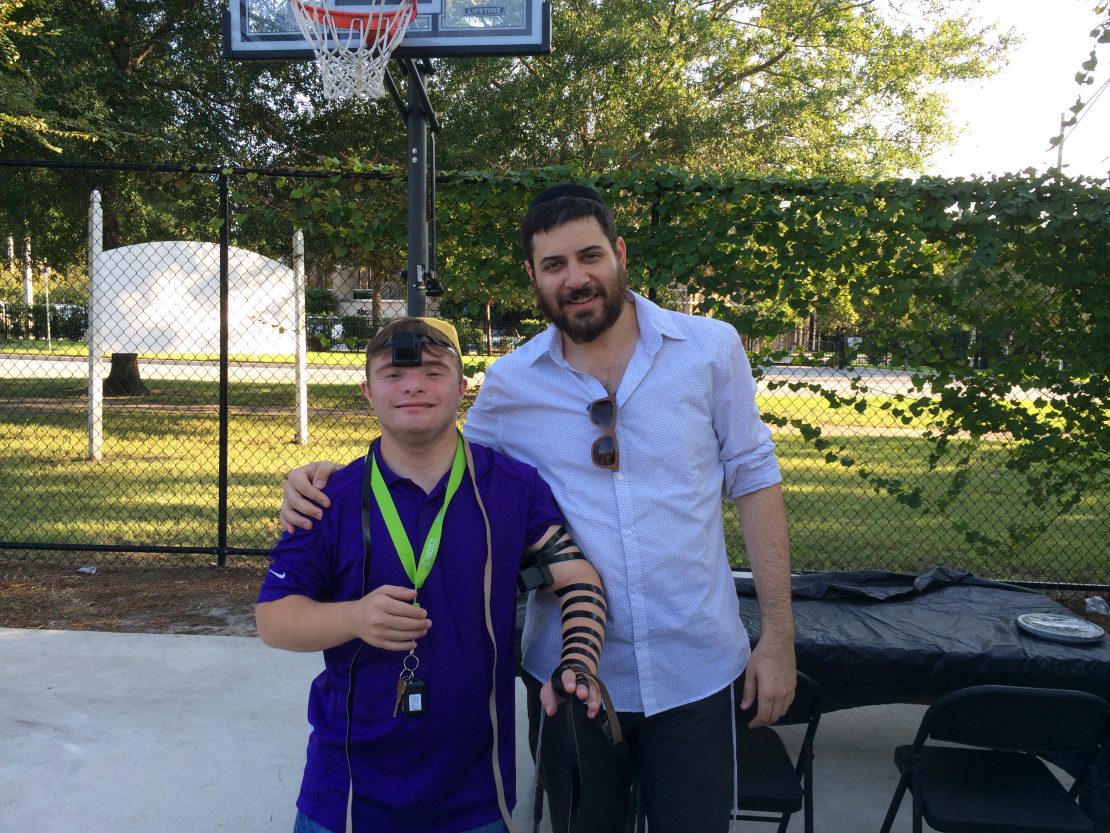 Meet Randy Kersh. A 22-year old student at the University of North Florida, Randy dreams of becoming a Reform rabbi. He was prom king at his high school in Cooper City, and he’s the co-president of his campus Chabad student group, the Jewish Ospreys. Randy also has Down syndrome.

He’s studying at the ARC of Jacksonville On Campus Transition Program, where students with intellectual disabilities follow an individualized program of study at the University of North Florida. Passionate about life, friends and Judaism, Randy became an active member of the Jewish Ospreys student club, which is affiliated with Chabad of Southside’s Rabbi Shmuli and Chana Novack.

“The Jewish Ospreys is really awesome to me,” says Randy. “It makes me feel happy to come together with Chabad and make the students feel welcome here.”

For Rabbi Novack, the feeling is mutual. “More than we do for Randy, he does for us. Everyone loves having Randy around! He always has a huge smile on his face and encourages everyone to come and participate.”

Randy takes his role as co-president seriously: he joins the rabbi at tabling events (often arriving earlier than the Novacks), helps plan weekly events, and, in the past, he’s advocated for kosher food on campus and helped organize the Intercollegiate Shabbaton in Gainesville. And of course, “I make sure that we have food for the student events,” he says.

At the Gainesville Shabbaton, Randy stood up in front of over 300 students to speak about his school, and then convened a meeting of all the student presidents. He’s a regular at Chabad of Southside on Shabbat, where he gives a weekly speech.

“Randy is very energetic and he doesn’t let anything get in his way,” says Lee Giat, the other co-president of the Jewish Ospreys. “I think he’s got the most Jewish spirit out of any of us, even Rabbi Novack!”

Anaelle Bensaid joined the Jewish Ospreys on an exchange program from Paris. “Randy is someone who is very involved, and he always wants to do everything good,” she shares.

On one memorable Shabbat, a family with a special needs child visited Chabad of Southside, where they met Randy. When they saw how active and involved he was, their faces lit up and they began asking about him. “It gave them hope for their own child’s future,” shares Rabbi Novack. Adds Lee, “He’s a strong symbol of not letting anything get in the way of doing what he loves.”

Recent years has seen greater awareness of inclusion on campus, with 263 colleges across the US now offering programs for students with intellectual disabilities, a 77% increase from 2009, according to the National Center for Educational Statistics. Yet once these students arrive on campus, their integration with other students can be minimal. The Institute for Community Inclusion describes one of the standards for inclusive higher education as “providing access to participation in social organizations” such as clubs; with his involvement in student life, Randy can be a model of true inclusion for others.

“He’s one of the gang here at the Jewish Ospreys,” says Rabbi Novack. “Other campuses can learn from this that if they have someone like Randy, they don’t need to be separate! G-d makes everybody special and Randy has his own unique gifts that we all benefit from.”

Nina Greene, Randy’s mother, appreciates that Randy has felt included in all aspects of the organization and a contributing part of the Jewish Osprey family. “I truly believe that the friends he has made in Jewish Ospreys will last long beyond Randy’s time at UNF.”

As for Randy, “I’ve learned a lot from all my friendships made on campus, and I hope my friends have learned something from me too.”

To learn more about the Jewish Ospreys, visit their Facebook page.

Related Articles
View All
UpStart Awards ZABS Place National Recognition
The store began as a response to young adults with special needs who were aging out of established programming. Before its inception, this population often…
Southside Jewish Community Breaks Ground for Area’s First Jewish Facility
(lubavitch.com) Southside community members and leaders turned out Thursday to celebrate the groundbreaking of the area's first Jewish institution, a new Chabad-Lubavitch center.  The event spells…
JLI Toward Inclusion
RCII has teamed up with JLI, the Rohr Jewish Learning Institute, creating Toward Inclusion, a compelling course that will advocate for, and advance, the inclusion…
Get Inspiration to your inbox!
Newsletter
Join our weekly newsletter for inspiration and updates
Donate
Find Your Local Chabad Center
Subscribe
|
Log In
Chabad
About Chabad-Lubavitch
About Chabad Lubavitch
The Rebbe
Headquarters
Magazine
Magazine
News
News & Updates
In The Media
Impact
Social and Humanitarian
Social and Humanitarian
Education
Education
Community
Community