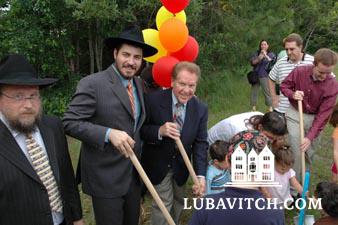 (lubavitch.com) Southside community members and leaders turned out Thursday to celebrate the groundbreaking of the area's first Jewish institution, a new Chabad-Lubavitch center.
The event spells a watershed for Southside, which has a local Jewish population of about 5,000, and was planned to coincide with Lag Baomer, the 33rd day of the Omer, a "day of joy" commemorating the yahrtzeit of Rabbi Shimon Bar Yochai.

"This is significant," explains Chabad director, Rabbi Shmuel Novack. "What greater joy is there than breaking ground for a new center of Judaism?"

First honors went to several preschool children who stood poised with shovels. At a call from the Rabbi, the youngsters enthusiastically dug in.

"It is all about the children," says Rabbi Novack. Chabad philosophy emphasizes that Jewish continuity is in the hands of the next generation. "The key to Jewish survival," he elaborates, "is and has always been education – and the earlier the better."

The new 5,000 square foot center will feature a state-of-the-art preschool with six classrooms. Adjoining it will be a 3,000 square foot creative playground as well as a large lake. Until now, the well-regarded school attended by children throughout Jacksonville, operated from the Novack's home. Rabbi Novack anticipates that the larger space will help double attendance within the next six months.
Rabbi Yossi Kahanov, director of Chabad of Northeastern Florida for 18 years, talked about Jewish education as a key to Jewish pride. "How wonderful it is to see these children hold their heads up high and be proud of their Jewishness."

Despite the school's prominence in the building, it is not only the preschoolers who will benefit. Southside, Jacksonville encompasses a particularly broad population. Within its borders study 100,000 college students. Young families share sidewalks and coffee shops with older retirees. Of the 5,000 Jews in the area, several hundred attend various Chabad programs. These programs, like the preschool, are currently held in the Novack home.

"The dynamics involved, of bringing together the young and old, allow everyone to explore their Jewish identity  more sincerely." Rabbi Novack meets many of his guests through weekly classes, community barbecues, and visits to hospitals and prisons.

"It is with great pride and joy that I am present at the beginning of this, the first Jewish institutuion in our area," Councilman Redman enthused. "I am grateful for the continual survival of the Jewish people, and I pledge my utmost to help Chabad in any way possible."
Rabbi Novack aims to open the Chabad House's doors in time for the High Holidays.