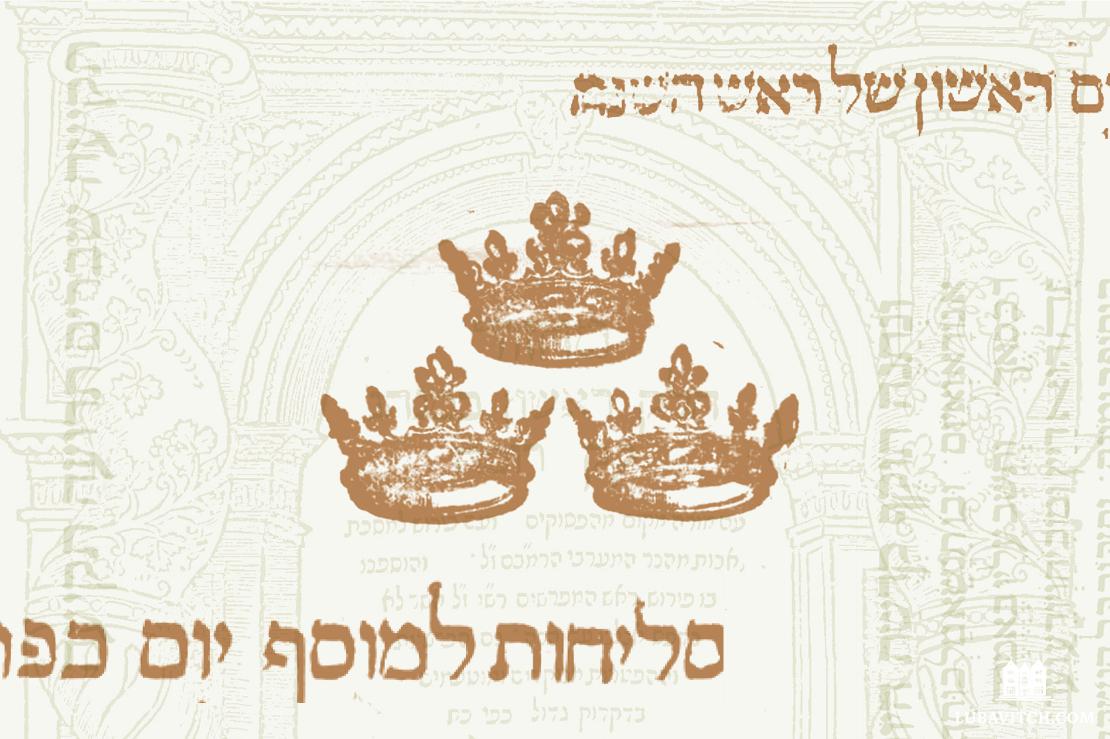 Between the lines, at the High Holiday services

There is a time for learning and a time for prayer. Torah study is an intellectual pursuit; prayer is a spiritual-emotional experience, a service of the heart and soul, an opportunity to connect with an elevated state of being.

Still, prayer and study complement each other, and this is especially true during the High Holidays. Since the language of the liturgy is richer, more poetic, and ornate, and since many of the prayers and piyutim are distinct to this time of year, cantors are encouraged to take the time to familiarize themselves with the meaning of the prayers before they proceed to lead the services. And the literal liturgy is just the beginning: the prayers are filled with allusions, references, profound theological concepts, and lessons for life. We reflect on these deeper ideas during our prayers, and hope that the imprint they leave on us will linger long after the machzor—the holiday prayerbook—has been closed.

Here is an assortment of those ideas, gathered from a variety of sources, from Chasidic to Halachic, to enhance your High Holiday prayers. Some of the passages

referenced here make several appearances in the services; they have been arranged by order of their first appearance.

This prayer of thirty-nine supplications, each beginning with the phrase “Avinu Malkeinu” (Our Father, our King), is recited on Rosh Hashanah, Yom Kippur, and every day in between, as well as on fast days. Its first, and most famous, line has been set to a well-known tune attributed to the founder of Chabad, Rabbi Shneur Zalman of Liadi. In some communities, it is sung before every High Holiday service.

According to a halachic compendium from the Middle Ages—Kol Bo—the Avinu Malkeinu goes all the way back to Talmudic times: Once, when a public fast was declared in order to bring an end to a terrible drought, the great  Rabbi Akiva led the community in a brief prayer of his own composition—“Our Father, our King, we have sinned before You; our Father, our King, we have no King but You.” G-d answered his entreaties immediately. From this kernel, additional stanzas grew over successive generations to produce several variations of this classic prayer.

In his classic work Reishis Chochma, the 16th century Safed mystic, Eliyahu de Vidas, links Rabbi Akiva’s biography to the power of Avinu Malkeinu. Born into a simple family who had converted to Judaism, Rabbi Akiva had no special pedigree to invoke when he prayed. Instead, his address was direct and unadorned—to our “Father and King”—appealing to G-d’s infinite generosity without reference to his own merit. It was precisely because he felt he was not entitled to divine favor that he received it.

For the World, Forever

Those who seek You will not ever (l’olam) stumble . . . for the remembrance of all Your works comes before You and You analyze the deeds of them all.

The Rebbe of Radomsk explains that the word l’olam can mean both “for ever” or “for the world.”

Thus he suggests an alternate rendering of this prayer. Instead of “never stumbling,” we can read it as follows: “Those who seek you for the world will not stumble.” That is, those who turn to beseech G-d on behalf of the world—as opposed to thinking only of themselves—will not stumble or falter. Because their pleas are altruistic, they will rise straight to Heaven.

When praying on Rosh Hashanah, one should not focus only on one’s own needs and aspirations, but on those of all humanity.

The Wholeness of a Broken Heart

For You hear the call of the shofar and listen to the teruah; there is none like You.

This passage refers to two important sounds. First it addresses “the call of the shofar.” Then it addresses one particular kind of shofar call—”the teruah”—which is a rapid-fire blast of nine staccato notes. Why does the prayer list both sounds? And why only those sounds?

In this prayer, we say that G-d “hears” the sustained, righteous sound—as if from a distance— whereas He “listens” to the broken penitent sound —as if more closely. This indicates that the returning sinner is holier than someone who has never sinned at all. The one who has made mistakes but is making amends—who has broken things but is committed to repairing them—they are closer to Heaven.

This is why the prayer concludes with the phrase “there is none like You.” Because only G-d would cherish the penitent above the infallible. Once a vessel cracks, or a machine breaks down, a wealthy person will simply discard it and not bother with it anymore; a human king has no use for broken things. But the King of all kings is different; G-d is close to the broken-hearted…

Do not cast us aside in old age, and do not forsake us when our strength fails.

These words seem to imply that the young have less need for G-d—as if being abandoned by G-d is a daunting prospect only for the elderly. But could it really be true that we have less need for divine assistance when we are young, since we have our own strength, our own youthful energy and initiative, to rely on? Aren’t we all dependent on a Higher Power?

The Baal Shem Tov once asked this question, and explained the prayer in this way: With the passage of time, a person might let their relationship with G-d grow old. So we recite this plea as a reminder to ourselves:  we must never let our religious observance become stale and decrepit.

The Tzemach Tzedek put it this way: “May the words of the Torah never grow old for you; may they be new for you, every day.” That we always remain open to discovering all that is fresh, invigorating, and inspiring in religious life –  and in our relationship with G-d – is a prayer for both young and old alike.

A Song That Doesn’t End

For we are your people and you are our G-d…

This prayer, a paean to the many strands that make up that unbreakable bond between G-d and the Jewish people, has been set to several melodies. The Lubavitcher Rebbe taught one such melody to chasidim at a public gathering, close to dawn during Simchat Torah in 1963.

The Rebbe didn’t compose the melody himself. As he recounted on that occasion, he overheard an old chasid singing it to himself at the close of the Yom Kippur prayers, years earlier. The Rebbe suggested that there is an insistent quality to the tune, which recalls the service of the Baal Teshuva—of the penitent restoring their relationship with G-d and stubbornly affirming that, no matter what transpired in the past, that connection is still there: “We are your people and You are our G-d / We are are your children, and you are our Father.”

The Rebbe also pointed out that the melody has no clear conclusion; the end loops into the beginning, so that it can be sung over and over again. This, too, recalls Teshuva. The process of repentance and return is never-ending, in that no matter how much personal progress a person makes, there is alway more to do.

From Judgment to Compassion

Extol G-d: He sets His throne for justice… therefore let Him be glorified — the Lord of hosts who is exalted in justice.

What does it mean to be “exalted in justice”? The description of G-d being ascendant in justice – rising, or elevating, rather than descending—is telling. Rather than asking G-d to exercise or apply justice, we are praying for Him to ascend from being in a state of judgment, to enter a state of mercy.

This is achieved when a person exercises judgment on oneself, through restraint and self-discipline. After all, G-d does not need to judge those who judge themselves. So when a person closes their eyes from seeing evil, blocks their ears from hearing negative things, and maintains order at the gates of their own city —then “G-d is exalted in justice:” In the merit of these acts of self-judgment, G-d ascends from judgment to compassion.

One Day, All Year

In the Avodah section of Musaf on Yom Kippur, we recall the ritual service performed by the High Priest on Yom Kippur. As part of this service, he would sprinkle some sacrificial blood in the direction of the Ark that stood inside the Holy of Holies. While sprinkling this blood—eight times in all—he would keep count, but in an oddly repetitive way. Rather than simply counting from one to eight, he would count the first one on its own, and then start the count again from one to seven, while continually referring back to the first sprinkling.

Simply understood, this was a way to separate the first sprinkling from the rest, since the first was supposed to be performed in a slightly different manner. But Rabbi Shlomo Yosef Zevin suggests a deeper reason:

“One” represents the singular day of Yom Kippur, when the singular essence of the soul rises to its source and spends the day in communion with the Oneness of G-d. During the rest of the year, we aren’t able to maintain that intensely focused state of consciousness; our attention is dispersed by all the distractions and diversions of regular life.

But, the power of Yom Kippur is such that its influence extends throughout the year, so that even when we get caught up with one worldly thing after another, in our core, we remain conscious of the One.

A Year of Abundance

Upon emerging from the Holy of Holies at the conclusion of his Yom Kippur service, the High Priest would bless the year ahead with a benediction for every letter of the Hebrew alphabet. Some versions of this prayer, like the one cited here, contain a few blessings that are particularly apropos in economically uncertain times. Rabbi Tzvi Elimelech Shapiro, a 19th century Galician Chasidic master, explains:

Although we first pray that there should be low prices in the coming year, we also also add that it should be a year of satiation—that is of prosperity and abundance. As the Talmud says (Taanit 19b), even if prices are low, if there is no money, people can still starve.

Additionally, we pray for commerce. Generally, commerce has the effect of raising prices, and there is less commerce during a deflationary period. Therefore, we pray that prices should be low, and that it should nevertheless still be a year of commerce. In other words: may prices drop for the consumer while business stays high for the merchant; may we enjoy economic growth without inflation.