Kosher Comes to the Amazonian Rainforest 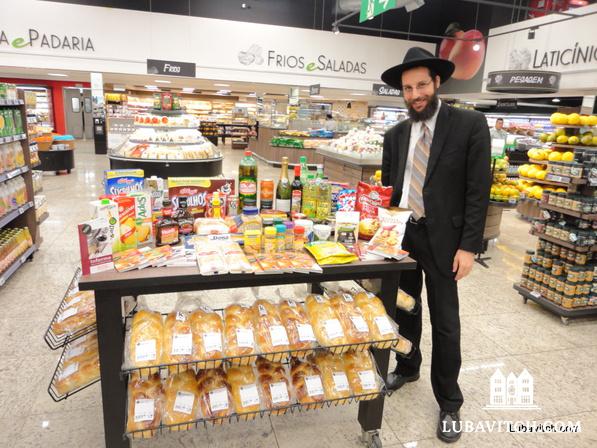 What’s a Chabad rabbi to do if he wants to help Jews in the in the Amazon Rainforest keep kosher?

Rabbi Arieh Raichman, Chabad representative to Manaus, Brazil, has been chewing on this conundrum for some time now.

The closest Jewish area is in Belem, 800 miles away. Inaccessible by land, it’s a two-hour long flight. Somehow, Rabbi Raichman, his wife Devorah Leah and their five small children manage, or make do with less. Some kosher food is imported by boat from Belem and Sao Paulo. And they’ve learned to take advantage of the local abundance of seafood. “We eat a lot of fish,” says Rabbi Raichman. “I bring my own knife and cutting board to the local fish market, and they fillet fish especially for my family.”

But providing kosher food for the greater Jewish population has proved a challenge. Waiting more than a month before basic supplies are delivered is not going to make kosher-keeping popular with the city’s Jews.

So the Raichmans, there since 2009, have developed a rather ingenious plan. “Why should we have to import food from other cities,” they began asking, “which only hikes the prices and makes kosher food inaccessible? We can begin producing kosher food locally. Let kosher become a cheap and viable option for everybody.”

Devorah Leah began preparing a weekly kosher menu from which people could order three-course meals to enjoy over Shabbat. Then, Rabbi Raichman turned to locals who had experience and a hand in the food industry. He reached out to Shalom Ohana, a local Jew who owns a pizza store. “We discussed koshering his restaurant for a day, and offered a fully kosher menu for the Jewish community.”

Ohana, an Israeli living in Manaus for the last four years, was more than happy to comply. Koshering the ovens and kitchen utensils proved to be a challenge, but when the work was done, a fully kosher breakfast menu was made available and for the first time in the history of the Manaus Jewish community, locals could eat out in a restaurant and order kosher food.

“A kosher restaurant in the Amazon? Unheard of here,” chuckles Raichman.

The event, said Ohana, is a reflection of the tremendous effort the rabbi and his wife invest to educate and raise awareness among local Jews. “We had about 20 people coming here for kosher breakfast that day,” not a skimpy number for Manaus, and more, he expects, will come next time.

Manaus’ first Jews arrived there in the early part of the 19th century. Fleeing poverty at home and attracted by the Amazonian rubber industry, thousands of Moroccan Jews emigrated to cities in the north of Brazil and Peru, building Jewish communities throughout the Amazon Basin. Assimilation and intermarriage to local Amazonians have since thinned these numbers out, and today, there are only several hundred Identifying Jews.

Zehev Benzaken, 35, was born in Manaus. After living abroad for a good number of years, he returned there to work on his Phd in molecular biology and was delighted by the change he observed in the local Jewish community.

“Until the rabbi came here, life was really difficult for the Jews,” Zehev told lubavitch.com. “Many had traditions that they kept, but were not knowledgeable about Judaism.” Today, he says, he notices Jews interested in practicing and becoming more educated about their heritage–a result he directly attributes to “the Chabad shluchim here.”

Driven by the Dr. Pizza success, Raichman has plans to do more for the Manaus community. He had a local bakery made kosher for a day, providing a supply of challah and kosher bread for the community, and a shopping mall kiosk will soon begin selling kosher ice cream and sorbet.

“We are creating awareness,” Rabbi Raichman says. “Until recently kosher food was a mitzvah associated with only big cities. Now people are seeing kosher food advertised and it has become more of a reality in their lives.”

Shaul Wolff contributed to this article

Related Articles
View All
Memorial Museum Opens to Honor Jewish Life in Brazil
Yona Krasilchik arrived in Sao Paulo in 1908 with a small group of landsmen from Bessarabia. By 1912, he had helped build Kehilat Israel, the…
For São Paulo’s Impoverished, A Light of Hope, Change
A new facility now offers access to the kinds of benefits that will raise the quality of life for the city’s struggling Jewish population.
Get Inspiration to your inbox!
Newsletter
Join our weekly newsletter for inspiration and updates
Donate
Find Your Local Chabad Center
Subscribe
|
Log In
Chabad
About Chabad-Lubavitch
About Chabad Lubavitch
The Rebbe
Headquarters
Magazine
Magazine
News
News & Updates
In The Media
Impact
Social and Humanitarian
Social and Humanitarian
Education
Education
Community
Community