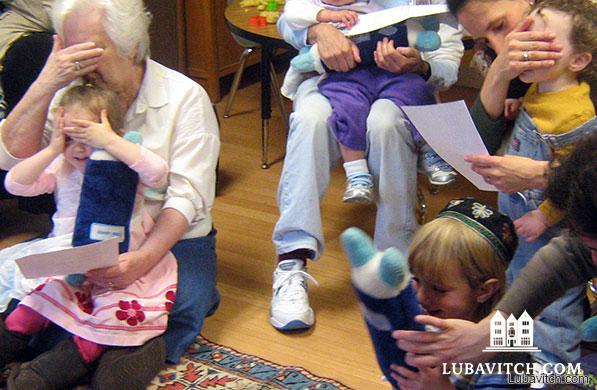 Moms and their children say the Shema at Chabad of Portland, Oregon.

All News
Portland, OR

Portland, Oregon, city of subcultures without a cause, now famous for a popular TV series mocking, as one reviewer wrote, its “supposed air of aimless, bohemian self-involvement, [and] the empty passions that dominate its world” is seeing a flowering of traditional Jewish life.

It is surprising that this city, which claims the smallest percentage of religiously affiliated citizens in the U.S., counts some 11 Chabad centers. Most of them have opened in recent years, a response to the state’s growing Jewish population wanting to affiliate.

The shift seems to reflect a pattern in the larger Pacific Northwest region, where the overall population has grown, and with it a Jewish population that has increased by 400 percent since the first Chabad representatives opened in Oregon 32 years ago.

Vicki Stone has been involved with Chabad of Oregon since their beginnings. As a young mother, she enrolled her son in the then new Chabad preschool, started by Rabbi Moshe and Devorah Wilhelm. Stone remembers the experience as “heimish,” a draw for the Chicago-born mother who was looking for a warm community.

Raised in a traditional Jewish household, Stone “moved” somewhat from her upbringing. But by the time her three children were born, she realized that unless she reconnects, they would, in all likelihood, veer off path further still, and become altogether disconnected from their faith.

Vicki enrolled her children in the Chabad preschool, which, in retrospect, she says, served as the catalyst not only for the children’s journey, but for her own.

The relationship she and her husband formed with the Wilhelms inspired them to become engaged, and in due course, they began to observe Shabbat and kosher, a lifestyle that has continued long after the children left home.

Stone may be atypical of her fellow Oregonians who are ultra liberal, gluten free and religion free. According to a report on 101KXL news radio, Portland claims the smallest percentage of religiously affiliated citizens. In fact, in February 2015, Councilwoman Trish Seiler came out against an “In God We Trust” display planned for inside a county building, saying she upheld secular values.

Still, says Stone, she’s witness to the explosive growth of Jewish Oregon. If 30 years ago, the infrastructure could be described as “very, very small,” today, she says, it is blossoming, with everything a Jewish family could hope for. Now home to many Jewish organizations, Oregon’s Jewish development is the result, she insists, of the seeds planted by the “Wilhelms, their partners, and people like us, the pioneers.”

Rabbi Chayim Shmaya Wilhelm grew up in Portland and now leads the Jewish community in the city’s southeastern area. When his parents moved to Oregon in 1984, there were about 8,000 Jews in the state. Today, the number is about 40,000—roughly one percent of Oregon’s total population, which itself has grown by almost one million over the last three decades.

The Wilhelms kept apace, establishing a Jewish day school, a mikveh, and a kosher supermarket, and re-cruiting eight more Chabad couples—among them the Wilhelm children, who, like Shmaya, serve 11 different Jewish communities in the state.

In Hillsboro, known as Oregon’s Silicon Forest for the high tech companies that operate there, Chabad is the only existing Jewish organization. As companies like Intel, Yahoo! Oracle’s High End Operations, Synopsys, Epson a Genetech plant, and biotech and medical companies opened there, Hillsboro’s population grew by 30.5 percent, making it, according to a January 2010 report in Bloomberg Businessweek, one of the fastest-growing cities in Oregon for the period between 1990 and 2010. Since arriving to Hillsboro in 2007, Rabbi Menachem and Chaya Rivkin have developed educational and social programs that appeal to the city’s Jews where the median age is around 32, many of whom work at Intel.

Alta Franco, became involved with Chabad after the birth of her first child two years ago.

“I walked into the only Jewish store in Portland I could find and was invited for Shabbat dinner,” Franco recalls. “I sought out a community and got adopted by Chabad that night.”

Franco, whose children go to the Chabad preschool and mommy-and-me classes at the Chabad center, says she wasn’t sure where she fit on the Jewish spectrum because she doesn’t really identify with any one Jewish philosophy. Chabad works for her.

“They incorporate and have a space for everyone,” she says. “They’ve created an environment of a lot of learning and diversity. We have been very happy.”

Franco’s story is repeated by others. Rabbi Motti Wilhlem, another of the Wilhelms’ children now leading the Jewish community with his wife Mimi in Portland’s Westside, talks about a young woman who defied her Jewish parents by intermarrying and escaping to Portland, refusing to engage with Chabad or any other organized Jewish option. She signed up for a mommy-and-me group, not knowing it was at Chabad. Now, she sends her child to Chabad preschool.

“She’s told her parents that she wants to create her own journey,” says Motti. “Now she is on a Jewish journey.”

Sara Rosenberg Brown is a young mother in southeast Portland. Raised Reform and intermarried, she wasn’t sure she could find her place in the Jewish community. But she knew she wanted to raise Jewish kids.

“I have been involved in Judaism my entire life and I have never felt so welcome. They don’t make me feel less because I don’t keep Shabbat,” says Brown, “and they don’t ignore me just because I am a woman.”

Brown’s son in enrolled in the Jewish preschool and her family regularly attends Chabad events. Her husband is learning, too. She says growing up Reform she felt Judaism revolved around the synagogue, and that the congregation, though deemed liberal, was not open to alternate ideas or even constituents who were interested in exploring their Judaism on a deeper level. Today, she feels her son is getting more from Chabad than she ever had.

“I think that now Judaism is part of our life, our household. My son very much identifies as Jewish and I see it is becoming ingrained in who he is, in every aspect of his life,” says Brown. “I appreciate that so much.”

Related Articles
View All
A New Mikvah To Open In Oregon
Three hundred miles. That’s the distance from Chabad of Ashland, Oregon, to the closest traditional mikvah. Ashlander women who wished to keep the mitzvah of…
Portland Community Member Says: Thank You Rabbi Wilhelm
More than once, every day, I say to myself: “I should do X or Y, but I don’t have time right now, this X or…
Oregon’s Chabad Families At Home With The Governor
{}
First Person: A Graduate Reflects
It is not easy to attend a university and receive an education that prides itself on liberal, intellectual, and unbiased humanist values, while at the…
The Boys From Brooklyn
For Rabbi Chaim Shmaya Wilhelm, a son of Portland, returning to his hometown for a summer of study is only natural. This August, Wilhelm and…
Features
Remembering The Struggle for Russian Jewry
Ninety-three years ago today, Rabbi Joseph I. Schneersohn (1880-1950), sixth Lubavitcher Rebbe, and the leader of Russian Jewry at the time, was freed from Soviet-imposed…
Features
Wordsmith: Tamim
The tamim is unflappable. He does not sway with the winds of change, nor bend to meet the expectations of others. He is a simple…
Features
Remembering Rebbetzin Chana: Jewish Feminine Role Model
Rebbetzin Chana Schneerson, a feminine role model of Jewish activism and proponent of Jewish scholarship, mother of the Lubavitcher Rebbe and wife of Rabbi Levi…
Features
Defying Religious Stereotypes on Israel’s College Campuses
By the time Zehavit Mohager, a psychology student, began her studies at the University of Haifa at age 23, she had already completed her army…
Get Inspiration to your inbox!
Newsletter
Join our weekly newsletter for inspiration and updates
Donate
Find Your Local Chabad Center
Chabad
About Chabad-Lubavitch
About Chabad Lubavitch
The Rebbe
Headquarters
Magazine
Magazine
News
News & Updates
In The Media
Impact
Social and Humanitarian
Social and Humanitarian
Education
Education
Community
Community