The Boys From Brooklyn 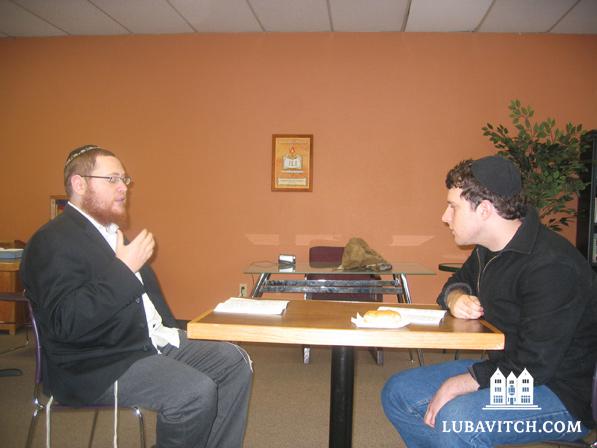 All News
By Dvora Lakein , Portland, OR

(lubavitch.com) It’s a homecoming of sorts.

For Rabbi Chaim Shmaya Wilhelm, a son of Portland, returning to his hometown for a summer of study is only natural. This August, Wilhelm and six young rabbis will descend on America’s greenest city with Talmudic tracts and Torah books, ready to study with local businessmen, students, and professionals. The much-anticipated Oregon Yeshiva Experience attracted 60 students last year; this year Wilhelm hopes to push the number to 100. With promises of “study with Moses, Maimonides, and a couple of guys from Brooklyn,” Wilhelm is setting up yeshiva-shop in this northwestern city.

Every morning following morning prayers, the rabbis and neighborhood men take time to study a subject of their choice in a one-on-one setting. Before each session, most of the students sign up for specific time slots and request their preferred topic online. Popular options include Talmud and Chasidic philosophy, but these youthful rabbis are open to anything. Last summer, a local nursing home administrator requested to study about proper treatment of the elderly and infirm. An individualized curriculum was created for him.

Wilhelm organizes the study partners and learns with several people himself. The summers, says this 22-year old, are a perfect opportunity to give back to the community he left a decade ago when he went to study in yeshiva. Wilhelm passed up on the opportunity to travel to exotic locations in the Far East or the South Pacific as some of his fellow rabbinical interns are doing. “I would love to go around the world,” he divulges, “but I think my efforts and talents would be best utilized at home.” Home is the Portland community his parents have served for the last 25 years, and continuing strong. “I know what needs to be achieved here.”

He isn’t the only one who thinks so. Similar homegrown yeshiva programs are popping up in at least three other cities around the country, including Phoenix, Arizona. “I am close to the people in my hometown,” states Rabbi Shlomy Levertov, a Phoenix native. “I go back home often. I recognize things I think are missing and try to establish them here.”

Like his friend several states to the north, Levertov is bringing a vanload of rabbinic colleagues, who, as part of the Merkos Chabad-Lubavitch summer visitation program, will spend for several weeks of intense study with community members. They offer personalized sessions on any topic, as well as twice weekly teen programs. Young female counselors provide study opportunities for local women. Levertov anticipates that 75 students will sit at their hallowed tables this summer.

“When we study with people who are not from a background similar to ours, it forces us to think more deeply and understand the material better so that we can properly convey it,” believes 21-year old Levertov. “We really gain a lot.”

Wilhelm expresses the same sentiment, adding that he tries to make the experience a mutual learning session, “not one of a rabbi and student.” All the material is presented in English so that each partner can follow along and understand it for himself.

“If these students are dealing with the world, they should know about the world,” states Mr. David Aiken, a retired Portland history teacher. “When the rabbis come here they learn about slight cultural variations in place and different Jewish communities. The experience is expanding for them as well.”

Aiken met the senior Wilhelm, Rabbi Moshe, in 2008. He expressed an interest in Talmud study and was thrilled when Wilhelm directed him to the younger rabbi’s yeshiva. Through his twice daily study Aiken was able to synthesize the two worlds he straddles.

“Nothing exists in history in isolation,” says the history teacher. “These sessions helped me get into that and discover the reasons behind some of the things we do.” In one lesson, Aiken and his rabbi partner studied the purpose of the morning prayer service, Shacharit. “What does it represent? Why was it prayed in the morning? What is its constitution? What is the historicity behind it? When one understands the reasoning, it becomes a great deal more meaningful. Judaism,” he observes, “is a religion of totality. We must appreciate what comes before in order to understand the here and now.”

He is excited to study this summer again (he hopes to learn with the same teacher as last year) but in the meanwhile Aiken has maintained a rigorous study program with Wilhelm’s older brother, Rabbi Motti.

“Throughout the year we have a very successful JLI [Jewish Learning Institute] chapter with 30 students and weekly Talmud and women’s classes. But this yeshiva is unique,” says Rabbi Motti Wilhelm, Chabad’s director of adult Jewish education for the greater Portland area. “The yeshiva provides not a class but an experience. Students can choose their own topics and really experience the yeshiva study hall.”

Before last summer’s session commenced, the senior Rabbi Wilhelm met Alan, who was living in an assisted living facility. Alan knew he was Jewish, but didn’t know he had any Jewish brethren in Portland. At Wilhelm’s invite, he came to yeshiva to study the Hebrew alphabet. When young Chaim Shmaya Wilhelm visited him this Passover, Alan asked enthusiastically when yeshiva was opening.

Well before the Oregon Yeshiva Experience opens its doors this August, Alan has already submitted his request for study partner and subject matter. All that awaits is the arrival of six guys from Brooklyn and their native Portland friend.