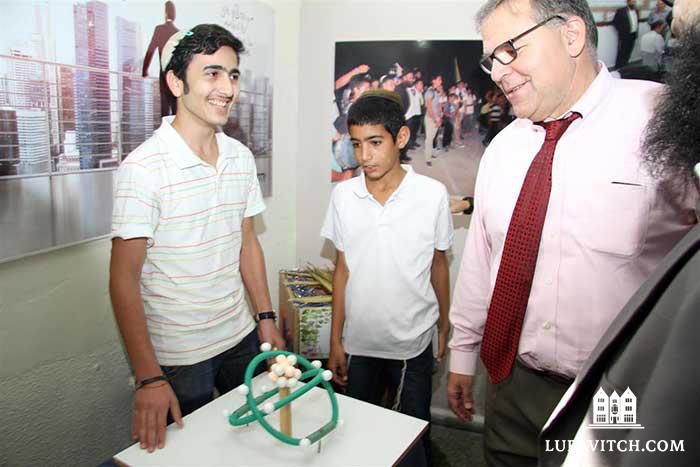 Last week, Jerry Silverman, President and Chief Executive Officer of The Jewish Federations of North America, met with Rabbi Yehuda Krinsky, Chairman of the Chabad-Lubavitch educational and social services. Silverman was accompanied by Rabbi Dovid Eliezrie of Chabad of Yorba Linda who has been spearheading the effort to build greater cooperation between Chabad and the Federations.

During the visit at Chabad-Lubavitch Headquarters, Rabbi Krinsky reminded Silverman of the Federation’s partnerships with Chabad under the leadership of both the sixth Chabad Rebbe, Rabbi Yosef Yitzchak Schneersohn and the Lubavitcher Rebbe, Rabbi Menachem M. Schneerson, of righteous memory.

Hearing of his scheduled visit to Israel, Rabbi Krinsky told him of Chabad’s activities in the country, and on his subsequent visit earlier this week to Israel, Silverman visited Ashkelon, where he had the opportunity to see for himself.

Silverman was particularly interested in meeting with the children to learn how they handled the disruption of sirens and the fear of falling missiles that send them running to bomb shelters for cover.

While in Israel, Rabbi Mendel Lieberman, director of Chabad of Ashkelon, guided the Federation head on a tour through the Colel Chabad soup kitchen and through their school for children with special needs.

“The core principles of the Federation are education, kindness and the entirety of the Jewish nation. The principles of Chabad implement these ideals in their activities in Ashkelon,” said Silverman.

Related Articles
View All
Partnering for Jewish Continuity: The UJC and Chabad-Lubavitch
At the UJC’s General Assembly, Chabad's Rabbi Avraham Berkowitz executive director of the Federation of Jewish Communities of the CIS and Baltic States was asked…
Jewish Federation of Greater Ohio Awards Chabad Representative For Creativity
(lubavitch.com) At a ceremony hosted by the Jewish Federation of Greater Ohio earlier this month, Devorah Leah Mangel, co-director of Chabad of Dayton was feted…
Chabad-Lubavitch Represented at the GA of the UJC
Twenty-five Chabad-Lubavitch representatives from cities across the United States and the former Soviet Union, are wrapping up the final day at the 72nd annual General…
Get Inspiration to your inbox!
Newsletter
Join our weekly newsletter for inspiration and updates
Donate
Find Your Local Chabad Center
Chabad
About Chabad-Lubavitch
About Chabad Lubavitch
The Rebbe
Headquarters
Magazine
Magazine
News
News & Updates
In The Media
Impact
Social and Humanitarian
Social and Humanitarian
Education
Education
Community
Community