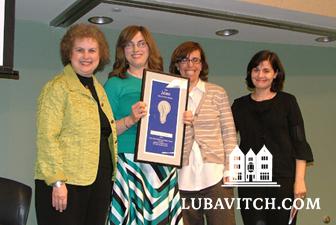 Mascara wands, kiddie lit, and flour sacks: one Chabad representative was honored by a Jewish Federation for consistently transforming the odds and ends of daily life into Jewish teaching tools.

(lubavitch.com) At a ceremony hosted by the Jewish Federation of Greater Ohio earlier this month, Devorah Leah Mangel, co-director of Chabad of Dayton was feted with the coveted Jack Moss Creativity Award.

“Devorah has tirelessly worked towards instilling a love for Judaism to all those whom she encounters.  But with Devorah, the learning often occurs not necessarily in a classroom but often in a much more non-traditional manner,” said Marci Vandersluis at the ceremony.

A week after the event, Lubavitch.com caught up with Mrs. Mangel, who stayed up until 4 am getting ready to bake luscious dairy desserts at her upcoming Women’s Circle meeting.

“People are highly educated in Dayton, and it is necessary to constantly gauge the pulse of the community to understand what they might find interesting. I don’t think I have a moment when I don’t have a program in my head.”

Creativity is imperative when you’re trying to reach Jews in smaller towns. Dayton has a Jewish population of 5,000 within a 45-minute radius. Spread out and Americanized, the Jewish community cannot survive on the casual Judaism that floats in the air among large Jewish communities in major metropolitan centers like New York City and Los Angeles.

“In a large community you can offer traditional programs, and there will always be a percentage of people interested no matter what you’d doing. In a small community, you have to do better. Here you have to spark excitement and interest,” said Rabbi Nochum Mangel, Chabad of Dayton’s other co-director.

Dayton’s Jewish community built its first synagogue a decade before Abraham Lincoln won the presidential election. Jewish businessmen and their families followed, and their offspring built more synagogues, started Jewish humanitarian and cultural organizations. But the drift toward assimilation in towns like Dayton sparked efforts like the Young Men’s Hebrew Association Jewish Club founded in Ohio in 1919 to “keep Jewish boys Jewish,” according to the club’s slogan.

Efforts faltered across the Midwest, according to Amy Hill Shevitz, author of Jewish Communities on the Ohio River. “By the 1990s, Jewish population and activity declined irretrievably. Many congregations merged or closed, and those that remained faced further numerical decline and financial difficulties.”

It was in this climate that the Mangels founded Chabad of Greater Dayton fifteen years ago. North Dayton was in better shape with active synagogues, a Jewish Community Center and a day school, so the Mangels looked south.

“We felt if we wanted to make a difference and be where Jewish families needed us most we had to move south. People told us we were crazy,” said Mrs. Mangel.

But they weren’t, they were just thinking out of the box. Real estate winds blew, and Jewish families began moving into the area. Hoping to offer the community’s children Jewish education without detracting from the established JCC preschool, Chabad took a step back.

“It’s not about how powerful Chabad will be. We’re about educating children.”  said Rabbi Mangel. Chabad representatives teach at the preschool, at area synagogue Sunday schools, and at Hillel Academy, the local day school.

A relationship forged with Larry Skolnick, executive vice president of the Jewish Federation of Greater Dayton, led to another effective partnership. Chabad and the Federation-sponsored JCC are working towards offering a joint winter camp.

“It will allow each of us to focus on our strengths, making it an exceptional experience for Dayton’s children.”

“Young parent will come to do things for their kids, but they get so much out of it, they end up coming back and learning more than they expected,” said community member Amy Bloom, who will be honored with her husband Dr. Michael Bloom at Chabad’s gala on June 22.

Bloom’s younger daughter Eliana, 5, adores playing in what many consider the juggernaut of Chabad of Dayton’s creative juices, Mitzvah Playland. The space, located on Chabad’s grounds, is a blend of eco sensitive kid-grown gardens and Jewish-themed play areas like a Miriam’s Spring sprinkler, a Noah’s Ark jungle gym and a Mount Sinai climbing wall.

Mitzvah Playland opened in stages last summer. In honor of its first full season, Mitzvah Playland will be hosting picnics on the first Sunday of each month, through September, and opportunities for parents to host themed birthday parties at the park.

Across Dayton, all this creative energy is generating change. There’s fresh kosher chicken and meat available in the supermarket. Chabad’s public menorah sparked a trend among area synagogues, and Chabad’s Purim mishloach manot basket delivery service has grown to 200 families in three years. There’s greater Jewish pride in the streets, too.

More families “are walking to shul on Shabbat, something you didn’t see in Dayton,” said Bloom. “Chabad has definitely made it more accessible.”

Plans for the future include enhancing awareness of Jewish birthdays through a Jewish toy club and more. “You have to keep your mind open,” said Rabbi Mangel, “and never be complacent.”