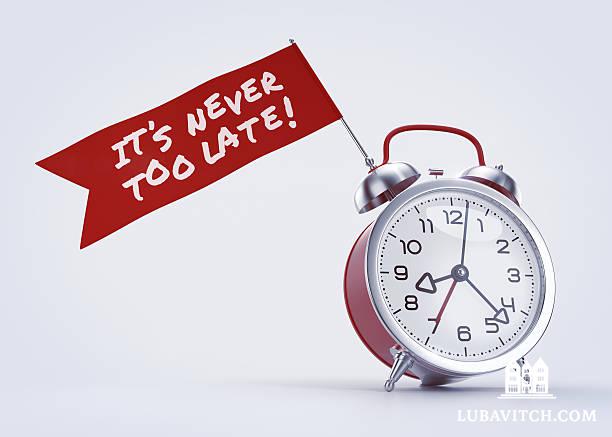 Alarm clock with a red banner and handwritten phrase on it. 3D rendered graphics on light background. The text on the banner created with the «Permanent Marker» font, distributed under Apache License Version 2.0.

It begins with a man crying. His name is Eliezer, and he is the twenty-eight-year-old son of a wealthy Judean named Hyrkanus. Hyrkanus has “many plowmen” and many fields to be plowed. In addition to these plowmen, Hyrkanus puts his son to work. But Eliezer is so overcome with tears that he cannot plow:

His father said to him: Oh my son! Why are you weeping? Are you distressed because you are plowing a stony plot?

Instead of having him hack away at the hard, stony ground, Hyrkanus moves his sensitive son to a softer, more tillable patch of soil. But, once again, Eliezer cries.

His father said to him: But why are you weeping? Are you distressed because you are plowing the arable land?

Eliezer replied to him: No. Hyrḳanos said to him: Then why are you weeping? Eliezer answered: I weep because I desire to learn Torah.

Hyrkanos dismisses his son’s yearning to study Torah. Twenty-eight is too late for such pinings, he tells him. Go marry a wife and beget sons, and they can learn Torah instead of you.

Later in the story, Eliezer encounters Elijah the Prophet, and again Eliezer cries. He wants to study but doesn’t know how. Elijah sends him to the leading Torah sage of the day. So Eliezer moves to Jerusalem where he can study at the feet of Rabbi Yochanan b. Zakkai.

When Hyrkanos discovers that his son has left the family farm, he becomes so furious that he moves to disinherit him. But Eliezer is unfazed; he longs for something loftier than a life of wealth and luxury. In Jerusalem, R. Yochanan meets a weeping Eliezer.

R. Yochanan asks him: Why do you weep?

He answered him: Because I wish to learn Torah.

R. Yochanan asked Eliezer: Have you never learned the Shema, or the prayers, or the Grace After Meals?

So Eliezer arose, and R. Yochanan taught him the three prayers.

There is something absurd about the image of the brilliant Rabbi Yochanan teaching a farmhand to read. It’s like studying finger painting with Da Vinci. But it captures Eliezer’s profound desire for Torah study. This, after all, is why Eliezer weeps: not because he is too delicate for field work, but because he hungers for Torah. Yet after Rabbi Yochanan taught Eliezer to read the prayers, Eliezer sat down and wept again.

R. Yochanan said to him: My son, why are you weeping? Eliezer replied: Because I desire to learn Torah. So R. Yochanan taught Eliezer two rules of Torah Law every day. And, on the Sabbath, Eliezer reviewed them and memorized them.

Two laws at a time, Eliezer steadily progresses until, in a dramatic set piece, we see how far he has come: he sits down to teach at a public gathering in Jerusalem, “his face shining like the light of the sun, and his radiance beaming forth like that of Moses.” By the time his father comes around and realizes that his son is worthy of the family fortune, Eliezer has long since left such trivial things behind.

This deeply evocative story may have taken place nearly two millennia ago, but it speaks directly to our own moment. For over a century now, we have heard about how that soft, arable, American soil poses a special challenge to traditional Jewish life. As the argument goes, back in the Old Country, Jews weren’t accepted to the universities, so of course they stuck with the Talmud. But, once they were no longer excluded, and material prosperity became available, spiritual abstractions had nothing left to offer.

But of course, freedom and wealth are never enough — and as Eliezer’s story shows us, they never were. He had it all, but he still wanted more. Likewise today, so many people find themselves having achieved great financial and professional success, pondering just what they have amassed, and what kind of inheritance they will leave behind: Who am I? What am I doing this for? What sense of purpose, of identity, of higher meaning, do I have to pass on to the next generation? To fill a hollowed soul, you need something more profound, and a connection to something higher.

So perhaps it is no great surprise that recent years have brought about truly remarkable grassroots growth: across every segment of Jewish life, in America and elsewhere, we are seeing a demand for genuine, substantive, Torah study opportunities. As a result, new learning initiatives have flourished and continue to do so, as this Torah-study issue of Lubavitch International documents. For Jewish people, eager to learn Torah, America has proved to be arable land indeed.

Even in the rocky ground of the Former Soviet Union, where violence and oppression had for so long stifled Jewish life, we have seen an astonishing embrace of Torah: over the past few decades, new shoots have sprung up in that black earth of Eastern Europe. Chabad shluchim have led the way, building thriving communities, yeshivas, and schools brimming with Jews hungry for the spiritual nourishment of Torah.

We don’t know what will happen to this extraordinary growth in the aftermath of the terrible destruction in Ukraine. But we do know that the resilient people affected by the upheaval there will put down roots once again—back in Ukraine or perhaps elsewhere—and continue their great journey of rediscovery. After all, the Torah grows out of all ground, soft and hard. And we will do whatever we can to aid that growth.

Her ways are pleasant ways,

And all her paths, peaceful.

She is a tree of life to those who grasp her,

And whoever holds on to her is happy.