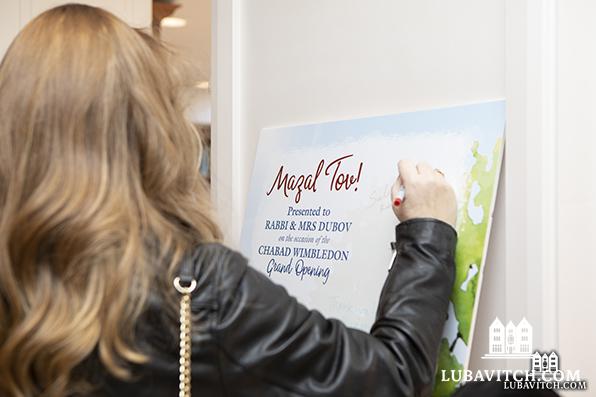 It’s a little over thirty years in the making, but Chabad of Wimbledon now has its very own center. London is divided into North and South by the River Thames. North London is home to numerous thriving Jewish communities, but the South’s five thousand Jews are spread over an area of about 240 miles.

To meet the needs of this scattered community, Rabbi Nissan Dovid and Sarah Dubov moved to Wimbledon to open Chabad Lubavitch of South London in 1988. With the help of Lubavitch Foundation, Chabad’s UK headquarters, the young couple purchased a home just seven minutes from the All England Lawn Tennis Club.

They began to host services, Shabbat dinners, and educational programs from their home. The Wimbledon Guild of Social Services owned a large but dilapidated property next door. As Chabad of Wimbledon attracted more people, they rented a large hall from the Guild to house their synagogue and larger events. The Dubovs proposed buying the property, but the building had been bequeathed with the provision that the site be used for the benefit of the entire community. Board members claimed that since Chabad primarily focused on the Jewish community, selling the property to Chabad would not honor that legacy.

As time passed, their family and community continued to grow. The Hebrew School that started with five children soon had fifty enrolled. A mothers and toddlers group, adult education classes, summer day camps, and overnight camps and a variety of other programs packed their calendar. Three years after they arrived, the Dubovs built South London’s first mikvah in their backyard. In 2008, Rabbi Dovid and Sora Cohen were sent by Chabad on Camous UK to work alongside the Dubovs, focusing on outreach for Jewish young professionals and the students on six South London university campuses. A decade later, Leah Dubov, now Moscowitz, became a part of the team, directing the Hebrew school and assisting with family and youth programs along with her husband Rabbi Yossi.

“With all this growth, we knew it was high time we had our own place,” Rabbi Nissan Dovid told Lubavitch.com. After the Guild terminated their lease in 2016, this need became more urgent, and the Dubov’s intensified their search for an appropriate and affordable permanent home. 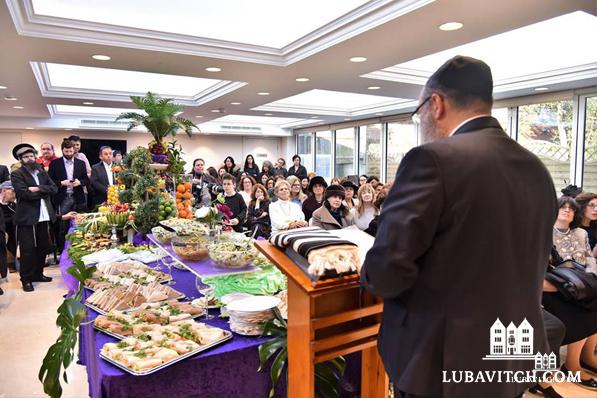 Regulations in England specify that only properties designated with D1 certification are allowed to be used for non-residential use. After a year of exhaustive searching, the only D1 property they could find was rundown and significantly beyond their budget, and they would still have to apply for permission to use the site as a synagogue, with no guaranteed outcome. The building company they worked with suggested they apply for D1 certification on their home.

Given their location, close to the town center and next door to the Guild building, the Dubovs thought this plan might work. With the help of a specialist, they submitted their application. Much to the application specialist’s surprise,  they received approval within seven days. “In thirty years, I have never received such an easy and quick response,” he told the delighted couple.

“I think the miracle was that none of the neighbor’s objected,” Sarah said, referring to the British policy where neighbors are able to protest any structural changes to nearby buildings.

Certification in hand, the Dubov’s soon moved their family out of the property and into a new home. Their original home was transformed into a $1.5 million community center. “This turns a new leaf for our community,” Rabbi Nissan Dovid said at the grand opening earlier this year. “We now have a central beacon, from which we will continue to shine light to every Jew in South London.”

With its chic, modern design, the center houses a spacious synagogue and a children’s center from which the Dubovs run the Hebrew school, and toddler and children’s programs. Plans are underway to open a Kindergarten too. There is a designated teen space, and a lounge and lobby invite people to relax, chat, or study. The mikvah has been refurbished, and most recently, the Moscowitzes opened South London’s first kosher store. They also included guest suites for individuals who want to avoid using transport on Shabbat when attending a local event.

The center also has ample office space—a hub of activity reaching out to and fielding queries from South London Jews and tourists. Being in the world capital of lawn tennis allows the Dubovs embrace the tennis theme in their branding, which uses the purple and green of the All England Tennis Club, and in their messaging. “We aim to ‘serve’ with ‘love.’ Puns intended,” they say with a laugh. 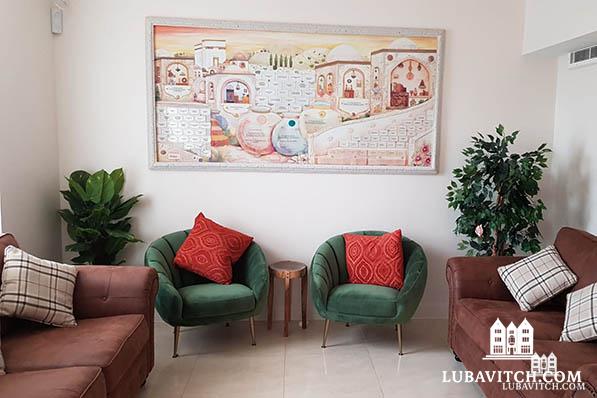 An inviting lounge area at Chabad of Wimbledon’s new center 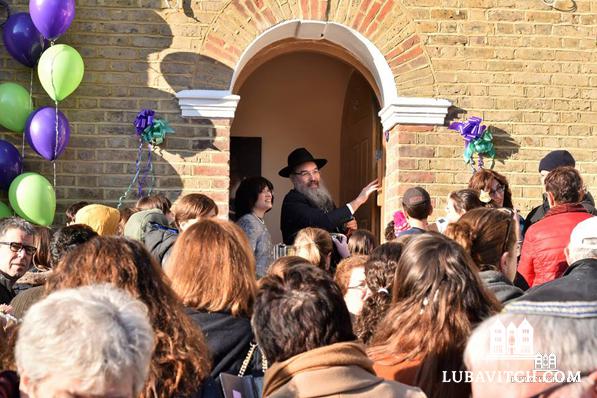