Statements on the Passing of President Shimon Peres 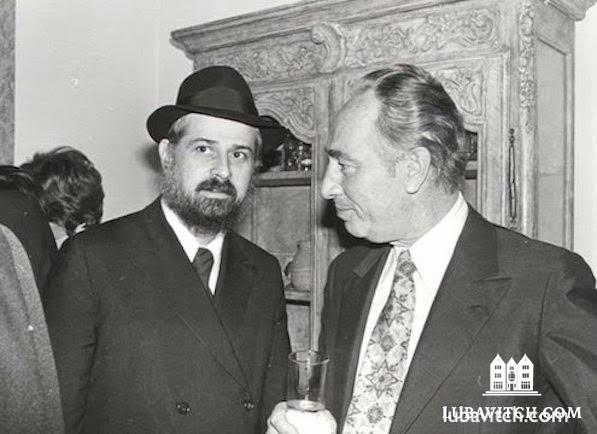 Chabad mourns the passing of Shimon Peres, Israel’s elder statesman and two-term Prime Minister who died early Wednesday morning. He was 93. Peres’s life unfolded alongside that of the State of Israel, and his political career, during which he served as foreign minister, defense minister and finance minister spanned the course of 10 US presidents.

“His long relationship with the Lubavitcher Rebbe and the Chabad movement weathered various differences,” said Rabbi Yehuda Krinsky, Chairman of the Chabad-Lubavitch Educational and Social Services divisions. “But he remained a devoted friend and encouraged the work of the Rebbe’s shluchim throughout his life.”

Speaking to Chabad-Lubavitch representatives from the FSU at a convention in Jerusalem, Peres, then President of Israel, said, “From Mumbai in India, to Siberia in Russia, Chabad Shluchim are in the trenches, breathing life into places remote and removed from centers of Judaism.”

Shimon Peres (Perski) was born in 1923 to in Wiszniewo, Poland, and grew up in an observant home. He was deeply influenced by his grandfather Tzvi Hirsch Meltzer, who studied Talmud with him. “When I was a child, my grandfather molded my world view,” he said in his acceptance speech upon becoming the ninth President of Israel.

During his tenure as President he worked to strengthen Jewish identity and unity. “Wisdom and values do not change,” Peres said in a 2009 interview. “The Torah of Israel is the only one that even though 3500 years passed nothing changed in it. Pyramids fell, empires came and went. However, no change were made in these eternal words. On the contrary, our values have become the foundation of the entire civilization.”

It was Peres’ love for tradition and learning that brought him to the Rebbe, Rabbi Menachem Mendel Schneerson’s court, in 1966, only months before the Six Day War. In their conversation about the tensions in the Middle East, the Rebbe advised Peres about the conflict.

“When I visited the Lubavitcher Rebbe’s court, I had an audience with the Rebbe for two hours,” he recalled in a 1990 speech. “I heard words of wisdom from him regarding the situation in Israel that I will never forget for the rest of life.”

A few years later Peres returned to the Rebbe’s court. When he emerged from the audience he revealed little, insisting that their conversation was confidential. He was willing to speak of the Rebbe’s interest in his then position of Minister of Transportation and Communications. The Rebbe inquired about the connection between the two ministries and urged him to “use modern communication — then the radio, telephone and television — for Jewish education.”

Thus began a long relationship between Chabad and Peres. “Chabad fills a special and unique position,” he once said in a speech. “Before the Jewish nation, before all of us, stands a great dilemma: How to live? Amid division, amid hatred, amid disregard, amid alienation, amid hostility. Or should we live with love for another, amid understanding, amid respect for your father, your mother, brother in spite of the many differences among us, but to live as one nation among us.”

Through its activism, Chabad, Peres said, taught that “that the Torah is not just a matter in the head but also a matter of the heart. Chabad is thus committed to the unity of the Jewish people.”

But the Rebbe vehemently disagreed with Peres’s position to pursue concessions of land for a peace deal that has never materialized. The Rebbe insisted that such a deal would not bring peace, but rather endanger Israel and the lives of its people. In a departure from his usual apolitical stance, he used his influence to hamper Peres’ election in his run for Prime Minister. Mr. Yitzhak Shamir continued to serve as Prime Minister.

Despite the disagreement, Chabad continued its relationship with Peres who often participated at Chabad events. He attended the opening of the Chabad center in Estonia, he visited Chabad in Riga, Latvia and Moscow, Russia. He joined the school children at the Chabad school in Jerusalem’s Ir Ganim neighborhood and participated at the dedication of a new Torah with Chabad of Warsaw, Poland.

“I take great interest in how the Rebbe was successful in the legacy he left to his Chasidim,” Peres recently said. “Chabad fulfills a Jewish mission of utmost importance. Wherever in the world there are Jews, whether it is in Russia, or any other place, I find Chabad people who are involved in Jewish activities. I see that this is the legacy of the Rebbe, of righteous memory, and for me it inspires great respect.”

Peres is survived by his children, grandchildren and great grandchildren. He will be laid to rest at Mt. Herzel in Jerusalem on Friday.

Related Articles
View All
Israel’s President To Chabad: You Give Life to the Living
{}
A Proud Day For Warsaw’s Jews 65 Years Later
Estonia: New Synagogue Rises in Country Once Declared “Judenfrei”
"You can burn down a building but you can't burn down a prayer," Israeli Deputy Prime Minister Shimon Peres said yesterday at the inauguration ceremony…
Get Inspiration to your inbox!
Newsletter
Join our weekly newsletter for inspiration and updates
Donate
Find Your Local Chabad Center
Subscribe
|
Log In
Chabad
About Chabad-Lubavitch
About Chabad Lubavitch
The Rebbe
Headquarters
Magazine
Magazine
News
News & Updates
In The Media
Impact
Social and Humanitarian
Social and Humanitarian
Education
Education
Community
Community