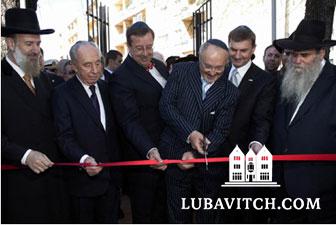 "You can burn down a building but you can't burn down a prayer," Israeli Deputy Prime Minister Shimon Peres said yesterday at the inauguration ceremony of the first synagogue to open in Estonia since WWII.

Joining him were Estonian President Toomas Hendrik Ilves, Israel’s Chief Rabbi Yonah Metzger, and Estonia's Chief Rabbi and Chabad representative to the country, Shmuel Kot, along with hundreds of local residents who came to mark what was widely hailed as the most significant development in Estonia’s Jewish community in the past 100 years.

The last synagogue in Estonia was bombed in 1944, by a Soviet air raid. In 1991, Estonia declared itself independent from the USSR, but its slowly growing Jewish population had to make do with a makeshift shul.

"Until today, Estonia was the last EU member state not to have a proper synagogue which is required for a full Jewish life," the country's chief Rabbi said. Estonia joined the EU in 2004.

The glass and concrete structure, which rises majestically above a bustling street in the city’s capital, offers a dramatic denouement in the story of a country officially declared “Judenfrei” by the Nazis in 1941. Fewer than a dozen Jews are said to have survived the war in Estonia.

Speaking at the ceremony, Estonian President Toomas Hendrik Ilves pointed to the shared trials of the Estonian and Jewish people.

"We both, Estonians and Jews, have lived among foreign people and under foreign power, but kept our language and culture," he said.

The new building will serve Estonia's Jewish population of about 3,000, with the country’s only kosher restaurant and mikveh. The sanctuary was designed to seat 180, and, said the country’s chief rabbi, “Now I'm very sorry about that because I'm afraid in two years it won't be enough."