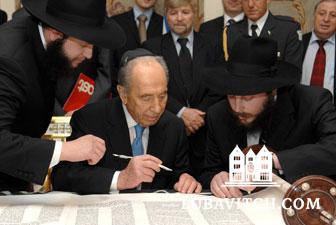 (lubavitch.com) Israel’s President Shimon Peres was joined Thursday morning by Warsaw’s Chabad Jewish community leaders at Poland’s Belvedere Presidential Palace as he inscribed the final letters in a new Torah scroll.
In his remarks, Mr. Peres reflected on the central place of the Torah within the life of the Jewish people, and the significance of this event coming 65 years after the Holocaust.

“The Nazis violated the Jewish people in body, but they could not touch the life and soul of our people—the Torah.”

He noted with symbolic interest, that Israel's President began his four day tour of Poland with a visit to a synagogue, and is concluding it with the installation of a new Torah scroll.

“There is heartwarming encouragement in this for Poland’s Jews to strengthen their ties to Jewish life and Jewish identity,” said Stambler.

President Peres carried the Torah scroll under the chuppah canopy, into the courtyard of the Palace, in a traditional procession of dancing and singing.

The Torah was then installed in Warsaw’s Chabad JCC.

Related Articles
View All
Israel’s President To Carry Torah for Warsaw JCC From Poland’s Belvedere Presidential Palace
(lubavitch.com/lns) Israel’s President Shimon Peres will meet with Poland’s Chabad-Lubavitch representatives Thursday at the President's Belvedere House in Warsaw, where he will inscribe a letter…
Features
Remembering Rebbetzin Chana: Jewish Feminine Role Model
Rebbetzin Chana Schneerson, a feminine role model of Jewish activism and proponent of Jewish scholarship, mother of the Lubavitcher Rebbe and wife of Rabbi Levi…
Features
To Pray Alone: Days of Awe in the Age of Covid-19
Marc Zell was used to traveling, just not like this. The American-Israeli is an international lawyer, and it was his work in political consulting that…
Features
Remembering The Struggle for Russian Jewry
Ninety-three years ago today, Rabbi Joseph I. Schneersohn, sixth Lubavitcher Rebbe, was freed from Soviet-imposed exile.
Features
Defying Religious Stereotypes on Israel’s College Campuses
By the time Zehavit Mohager, a psychology student, began her studies at the University of Haifa at age 23, she had already completed her army…
Get Inspiration to your inbox!
Newsletter
Join our weekly newsletter for inspiration and updates
Donate
Find Your Local Chabad Center
Chabad
About Chabad-Lubavitch
About Chabad Lubavitch
The Rebbe
Headquarters
Magazine
Magazine
News
News & Updates
In The Media
Impact
Social and Humanitarian
Social and Humanitarian
Education
Education
Community
Community