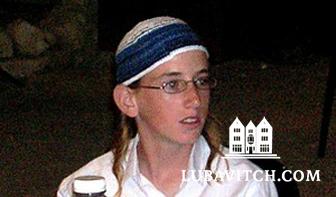 13 year old Shlomo Nativ was murdered on April 2 by an axe-wielding terrorist.

(lubavitch.com) The Israeli settlement village of Bat Ayin near Jerusalem completed thirty days of mourning over the weekend for 13 year old Shlomo Nativ who was murdered on April 2 by an axe-wielding terrorist.

On that fateful Thursday afternoon, , days before the Passover holiday, Yair Gamliel and Shlomo Nativ were playing near the local council building when a terrorist approached and struck them both on the head. Yair suffered a fractured skull and has since recovered. Shlomo managed to get to his home before collapsing in the kitchen. He was pronounced dead by emergency responders.

Israeli security officials announced last week that the terrorist, Mustafa Teet, 26, of an Arab village near Gush Etzion, had been apprehended and confessed to the murderous attack.

Shlomo Nativ is survived by his parents, Chabad Rabbi Chaim and Revital, and eight siblings. The Nativ family has lived in Bat Ayin for 20 years and was among the founders of the growing community in the Gush Etzion region which numbers close to 800 people.

Rabbi Nativ is the director of the School for Soul Knowledge in Jerusalem which specializes in teaching methods of counseling and healing according to Chasidic wisdom and philosophy. The school was co-founded by Rabbi Yitzhak Ginsburg, a well known Israeli Chabad rabbi, speaker and the dean of the Od Yosef Chai Yeshiva.

In a show of great strength, faith and trust, the Bat Ayin community celebrated a wedding on the night of the murder. Known as a kind and giving boy, Shlomo had volunteered to clean the couple’s mobile home prior to their moving in.