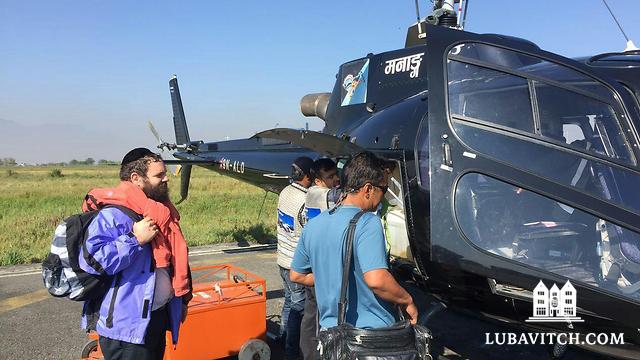 It was the night of Yom Kippur, and Rabbi Chezki Lifshitz was not in shul.

The rabbi, who heads the Chabad house in Kathmandu, Nepal with his wife Chani, was off on a search-and-rescue mission. A 50-year-old Israeli had met with a nasty fall while hiking at a Mount Everest base camp with his son, and had reached out to the Chabad for help.

This was no light accident: both of his legs and one of his hands were broken, and he was losing a lot of blood.

Lifshitz whipped into action, corralling local Israeli doctors and arranging for them to care for the hiker at a guesthouse near Namche Bazaar, the site of the accident. There, they managed to somewhat stabilize his condition until they could get him to a proper medical facility.

Attempts to transport the man to a hospital via helicopter were unsuccessful due to heavy rain and fog, but with the dawn of morning and a clearing of the weather, Lifshitz found a local rescue team to airlift the patient to a Kathmandu hospital.

“Yom Kippur has passed here, bringing with it a complex and complicated rescue… we feared for a human life,” Lifshitz wrote on Facebook.

“The injured man is currently undergoing medical treatment in Kathmandu, and is in stable condition. We are praying for his speedy recovery and his return home to his family.”

Lifshitz is no stranger to conducting dramatic rescue efforts; in fact, the Chabad house began providing Israeli backpackers with satellite phones in 2015 that help the emissaries find and aid hikers who are in danger.