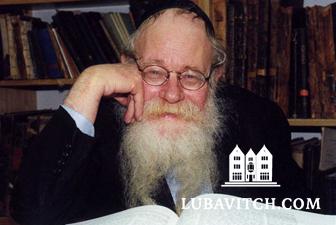 In honor of the 13th yahrzeit of the Lubavitcher Rebbe, Lubavitch.com presents the following excerpts and video clips of an interview with Rabbi Adin Steinsaltz, by Baila Olidort.

Rabbi Steinsaltz is at work on a biography of the Rebbe.

Q: When Chabad was in Russia, the model Chasid spent time in contemplative prayer, spiritual devotion, and in general, was very inner directed.

Once it relocated to America, the focus seemed to shift.

RS: The Rebbe made a very conscious move, and he said so. He said we cannot now afford the luxuries, including our prayer, in any high level. We have now to change our job. In fact what he said is that we are now saving the people, we cannot deal with finesse, we have to deal with simple, crass work.

I don’t know that it was an easy decision, it came at an enormous price–changing the focus of the movement, I’m not trying to absolve the Rebbe and I’m not saying that he wasn’t aware of this. He was aware, he knew he was paying an enormous price for it.

I remember there was a time that the Rebbe stripped the yeshivot in Israel of students to become teachers in the Chabad schools. The Chabad school system needed teachers. Where did they get teachers? From the yeshivas. Someone asked the Rebbe, how can you take someone who sits and studies Torah, and send him to be a teacher in an elementary school?

And the Rebbe said, now is the time of the flood, you have to save souls, and we have to give up on things. And he said, had it been your own son, what would you say?

As long as we’re speaking about saving someone else’s son, you’ll say let this young boy sit and study Torah, but if it was your own son or daughter, would you also say, that?

So there was a shift, and I’m sure that the Rebbe made this conscious decision– he said, you have here a world of beauty, full of contemplation, devotion, a world in which you can see all kinds of Chasidim really having a different type of life, but this is not a working tool, you cannot do very much with it.

So you change it. Chabad was, for 150 years, an intellectual body that craved excellence. The Rebbe said, now we have to make it into a body that is trying to be effective.

There are a few people who won’t agree to this on principle, but others may say, “did it work?” But the  Rebbe would answer: that was the only way it could be done—there was no other way of doing it.

So it  was not an easy decision, and I’m not sure the Rebbe was happy about it. But we as a people are being decimated by assimilation, intermarriage and by forgetfulness. People speak about the Holocaust. A terrible thing, but on the other hand, the Holocaust was not as persistent and as sure as what is happening now.

For every tick of the clock, there is one less Jew. If this is the situation, there are lots of things you cannot afford to do doing, morally speaking.

Q: It has been said that the Rebbe was reluctant to accept the role after the passing of his father-in-law. Tell us about that.

RS: One of the most painful decisions of the Rebbe was the decision to accept it. He clearly didn’t want it. He married the daughter of Frierdiker Rebbe and he moved out.

Q: What do you mean by that?

RS: He wanted to be a private person. The Rebbe got married, and he moved to Berlin, he was not involved.

When the Rebbe accepted the leadership, the Rebbetzin, his wife, said, or rather showed, that the Rebbe has to do all these things–he has to appear in public and have his picture taken an enormous amount of times, but she doesn’t have to do that, and she in fact remained a very private person.

When the Rebbe became Rebbe, he made his own Akeda [sacrifical offering–of his own private life]. But he fulfilled it, he wasn’t stopped in the middle.

My point is that the Rebbe may have had lots of plans, he may have had plans to write books and do many things, but they were as a private person.

Instead, he took a group of people twice hit, first by the Russian revolution and then by the Germans (the Jews in America were in very small and unimportant pockets), and he made them into an army, and that was very remarkable.

Q: It’s interesting that while the Rebbe had wanted, as you say, to be a private person, the intensity of the Rebbe-Chasid relationship seems to be greater than that of any other Rebbe. The Chasidim consulted with the Rebbe on everything, not just spiritual matters.

They were his children, he wanted a close relationship.

I don’t know if my book about the Rebbe will have this name, but my suggested title for my biography of the Rebbe was, Father Teacher King, because he fulfilled all these roles—which is the complete role of the Rebbe.

On The Rebbe and Moshiach

Q: One of the most difficult challenges that the Rebbe set for himself was the campaign to bring Moshiach. This was always an objective among the previous Rebbes but the Rebbe took it to a whole different level—he made it really dominate the consciousness of the people.

RS: What is Moshiach?

Moshiach means, in very formal, perhaps non-Jewish terms, the end of history. Moshiach means that everything is, in a certain way, frozen. Or, if you will, the movement continues but it doesn’t continue in any other direction. You’ve captured all the historical movement into a way that it cannot go otherwise so that from this time there is no more history.

So in this sense, Moshiach means history stops, and that humanity almost stops.

All the descriptions of what happens in the times after Moshiach are not part of human experience—they resemble human existence but are different.

Something like this—which is not a local, personal experience, but a global experience, needs an enormous amount of input, and in order to have it appear, it needed a huge amount of Jewish input. Which explains why the Rebbe made it such a broad concern.

Q: What do you say to those who prefer to believe in a Messianic era rather than in the literal anticipation for a physical human being who is going be the Moshiach?

RS: More than at any other time—when it was unimaginable to think about Moshiach, it is today very reasonable to have this literal belief. Today you have changes that happen within half an hour, and you can also see that the very appearance of one individual makes a change in history–we are now living in times where these things happen, and they happen in a more and more dramatic way.

During the lifetime of the Rebbe, there was clearly not another person who had the same ability as he.

Is there anybody else now? I don’t see it, but that doesn’t mean it’s not there.

Because I don’t know and because my knowledge may fail me now, but within a moment, something changes, something is revealed and the world becomes different, the idea in itself is not inappropriate.

More than that, waiting for what is called a “messianic era” is not that somebody comes with a good idea, but that he comes with an irreversible change.

The idea of the Moshiach is that he creates an irreversible new world.

The Rebbe wanted to make a global revolution. He said he wanted to bring Moshiach now.

That is a revolution.