In Odessa, Chabad-Lubavitch Prepares for 2,000 At Rosh Hashana Services 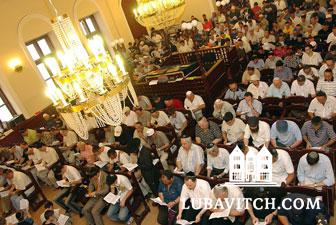 At a recent service in the Chabad shul in Odessa.

To ensure the safety of a crowd of 2000 worshippers on Rosh Hashanah, the city of Odessa’s municipal authorities plan to close the streets surrounding the Chabad center.

“The synagogue itself can accommodate 400 people, and it’s full the entire Rosh Hashanah,” Chabad’s representative in Odessa, Chaya Wolff told Lubavitch.com, “but more come to hear the shofar and the rabbi’s prayers for a good year. It’s our largest crowd of the year.”

Chabad has stocked crates full of apples ready to be sliced, so that the throngs can follow the tradition of dipping slices of the fall fruit into honey with wishes and prayers for a sweet new year. On Rosh Hashanah, long tables laden with the sweet snacks and other customary foods will stretch across the width of 100-year-old synagogue’s façade.

That waves of Jewish people would dare to show their faces in Ukraine at all, let alone celebrate their faith in the streets, is a miracle. Judaism has been resurrected in Odessa in the seventeen years since religion was allowed out in the open. Only 60 years ago, 1.5 million Ukrainian Jews were murdered in the Holocaust, and now Chabad has opened the country’s first accredited Jewish University with an enrollment of 60 students.

At the recent opening ceremonies for the university, the mayor of Odessa, Israel’s ambassador to Ukraine Zina Kalei-Kleitman, and Knesset members from four major parties attended. “We always knew of the wonderful work that Chabad does here, but here in Odessa, we had a chance to see first hand the true Jewish revolution Chabad made in the former Soviet Union,” said MK Yoel Hasson.

Chabad of Odessa attracts Jews en masse to its programs through its consistent outreach, on the airwaves, by mail, and as an outgrowth of its educational and humanitarian work. Its Or Avner school, part of the Chabad network in this region sponsored by philanthropist Lev Leviev, ranges from infant care through high school.  So numerous are the students at the schools that Chabad schedules separate shofar blowing times for the elementary and high school students.

For students attending the new university, all studying finance, Chabad is hosting a Rosh Hashanah dinner. With an eye to connecting as many college age students to the holiday as possible, the students have been invited to bring guests to the dinner. More than 150 are expected.

Festive holiday dinners are a fraction of what the 55 children in Chabad of Odessa’s two orphanages receive before the Jewish New Year. Thirty pairs of new shoes, their new leather smell still fresh, wait in the closets at the girls’ home. They have new dresses, too. At the boys’ home nearby, twenty-five new suits hang starched and pressed in the closets for the holiday. Coming from homes where parents are absent, too ill, or too strung out to care for them, the children are “surrounded by warmth” at Chabad’s homes, Mrs. Wolff said.

Significant effort is made by Chabad to outfit and equip the children who live in the homes in a way that protects them from feeling different, less than normal. On the second day of Rosh Hashanah, when Tashlich, a penitential prayer, is recited, the children raised by Chabad will be indistinguishable from the 400 proud Jews praying for a fresh start on the sandy shores of the Black Sea.

If you enjoyed reading this article, you may also be interested to see this link.