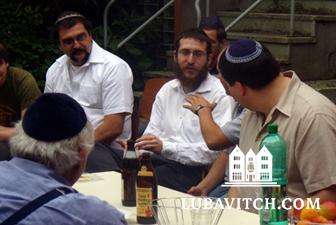 (Lubavitch.com/LNS) Arno Hamburg, chairman of the Israelitische Kultusgemeinde Nürnberg, remembers his bar mitzvah in Nuremberg’s liberal synagogue, but his memories of attending Orthodox services with his grandfather are happy ones.  Now he’s been helping Chabad of Nuremberg’s leader, Rabbi Eliezer Chitrik gain the support of a publicly funded Jewish community council.
Well before the Holocaust, this city’s central synagogue shed its traditions in the name of modernity. But in the coming weeks, with the support of the Nuremberg’s Jewish community council and the Rohr Family Foundation, Chabad of Nuremberg will begin its search for a more permanent synagogue space that will become a new home for traditional Judaism in this city.
“Fifty years after the Shoah, the Jewish community here was almost down to zero. The community is happy to return life not only to the liberal synagogue, but the traditional orthodox synagogue as well,” said Rabbi Chitrik. Currently Chabad rents a ballroom for its services and holiday programs.
Those who attend Chabad activities are not likely to have longstanding Nuremberg roots. Eighty to ninety percent of Nuremberg’s Jewish community members are from the former Soviet Union.
Many would rather see Jews from the former Soviet Union make their way to Israel, as one million did when the Iron Curtain fell. The 200,000 Jews who came to Germany chose otherwise. According to the Economist, in 2003, Germany passed Israel as the leading destination for Jewish immigrants from the former Soviet Union.
Nuremberg’s Jewish community grew because of the German government’s pledge of support, a move made to strengthen the country’s nearly vanquished Jewish community. From 1991 through 2005, the Jewish population in Nuremberg increased exponentially. Then, in 2005, the welcome mat was yanked after Germany changed its law, limiting Jewish immigration from the former Soviet Union to German speakers under age 45.
Russian Jews so outnumber Deutsch speaking ones that when Rabbi Chitrik sought to print a guide that offers how-tos and whys for hanging a mezuzah on the doorpost, he printed over 100,000 copies, all in Russian. He’s affixed over 100 mezuzahs on newcomers’ doorposts. Many were on homes occupied by Jewish families before the Holocaust, their doorposts still marked with grooves from pre-WWII mezuzah cases.
A good number of the families Rabbi Chitrik helped with mezuzahs had arrived with the mezuzah scrolls and cases they had from their grandparents in Russia. “They knew enough about a mezuzah to bring it with them, but not enough to know what to do with them or what they were for,” said Rabbi Chitrik.
Mezuzah illiteracy is a symptom of a greater threat to the Jewish community in Germany. Recent numbers peg Russian-Jewish intermarriage rates in Germany at over 80%. Chabad is working proactively to prevent this transplanted Jewish community from disappearing through marital attrition. In fourteen cities throughout Germany, from Berlin to Ulm, Chabad has opened centers with Jewish days schools, preschools, and a rabbinical college. Many of the Chabad centers tailor their programs and services to Russian speakers.
Chabad of Nuremberg, established with the help of Rabbi Moshe Kotlarsky, vice chairman of Merkos L’Inyonei Chinuch, is drawing Russian Jews in with Shabbat services, Torah classes for men and women, and a summer camp. They are looking to expand to include a preschool, Hebrew school and a kosher store.
The Chitriks are working to reach a generation with tenuous, sometimes frightening, connections to their Jewish heritage.
Boris Nesdanye, from Moscow, put on tefillin for the first time at Chabad of Nuremberg. The last time he saw tefillin was when his grandfather put them on while hiding in a back room in his Moscow apartment, out of sight from the KGB.
This Chanukah Rabbi Chitrik and the mayor of Nuremberg lit a menorah in sight of the building that was home of the infamous Nuremberg laws.
Looking out over the crowd that came to see the Nuremberg menorah, mindful of the area’s history, Rabbi Chitrik said, “It is a Chanukah miracle, the victory of good over evil, all over again.”