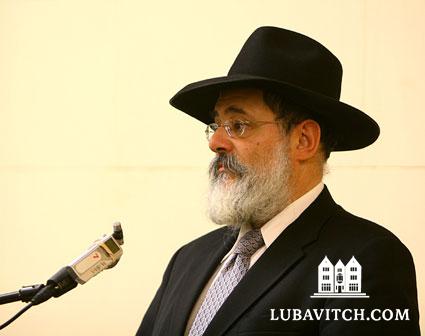 Rabbi Nochem Kaplan, Director of the education office of Merkos L'inyonei Chinuch, was recently elected President of the National Council for Private School Accreditation (NCPSA), the umbrella organization for accrediting agencies of private schools in the U.S. from early childhood through grade 12.

You’ve been elected to serve as President of the NCPSA. How significant is that?

Well, notwithstanding the fact that most people have never heard of it, the NCPSA represents in excess of 4,000 schools and some 5 million children nationwide. It has a major impact on education in the U.S.

In his speech on education last week, President Obama raised alarm bells of falling grades, crumbling schools and nations outpacing us in education.  What, in your opinion, are the greatest problems in the education children are receiving in the U.S. today?

We’re coddling children instead of giving them rigorous educational programs that would endow them with the tools to learn independently. We spoon feed information to them, sugar coat the process so as to make it “relevant” to them. Rigor is missing in much of what passes for education in America.

I’m reading that the United States is falling behind other developed nations in the percentage of its students who pursue college or other post-secondary education. Is that something that concerns you?

It does, but like most statistics, it lies. Because the fact is that American education is egalitarian and we’re trying to do a credible job with all children. Witness the No Child Left Behind Act. In most other countries, those less capable, are simply left behind.

It’s interesting that an international education association elected a rabbi to be its president.

The fact that I’m a rabbi is not germane to my election. I was elected because of my work in education for the last 35 years, and because I bring a fresh perspective.

That education needs to reflect values and ethics. Education is not only knowledge and skills. Look, we need to find some way to reintroduce ethics and morality into the education processes.

I imagine that this perspective resonates strongly within the broader religious community represented within the NCPSA association.

Yes, but not only with them. Even at the top echelons of education people are troubled that we have a seemingly Godless and ethically neutral educational system. That is the antithesis of what humankind should be striving for.

You are also the Director of the  Education Office of Merkos L'inyonei Chinuch, the Lubavitch Educational arm.

Yes, under Merkos I represent 300 schools and some 26,000 children nationwide. I’ve also worked with Torah U’mesorah for many years.

Then you are especially qualified to comment on the problems of Jewish education today.

Let me first say this: I believe that the quality of Jewish education today is better than it was a generation ago. But the demands of the times are much greater. Children must feel that education speaks to them, encourages them, interests them, and excites them so that distractions from the outside don’t take priority. We’re still falling short here. The world today is an exciting place. If you just log on to the internet, the distractions are enormous and pervasive, so you can’t expect a child to go back to learning by rote—it has to be something far more involving than that.

Aside from the financial crunch which is very acute, my contention is that parents need to see that their children are getting an outstanding education to justify the high tuition rates of private Jewish schools. Parents are more sophisticated and have greater expectations of schools.  If more Jewish schools were accredited—if more of them were meeting the standards for accreditation, more parents would be inclined to send their children to a Jewish school.
And you think becoming accredited is an important factor here?

Absolutely. Accreditation challenges schools to improve education effectively from within. This process of accreditation is the best way to improve education, because the school itself sets is goals and establishes a strategic plan. We then evaluate to see if they’ve honored their own stated objectives successfully. That’s much more effective than legislating from outside.

You’ll be President of the NCPSA for two years. That’s a short time. What do you hope to achieve by the end of your term?

Greater recognition of the value of accreditation, and that we find some way to encourage schools to think more in terms of ethical and moral education.

Where did the education fail Bernie Madoff and a whole string of Wall Street entrepreneurs? There are many bright minds among them, and yet they are so hedonistic and self absorbed. A basic ingredient is clearly missing in their education. Is it all only about self gain, about accumulating creature comforts? What about responsibility to community, to society and the world we live in? How much are those concerns reflected in the education of children in the U.S. today? Those are the issues I hope to address during my time as president here.

Related Articles
View All
Editorial
Not by Fear But by Faith
The Rebbe’s Vision for a Just Society
Editorial
A Time to Heal
When the doors of Chabad Houses closed, and shluchim adopted social-distancing guidelines, we wondered how this edition of the magazine would take shape. More importantly,…
Editorial
Do We Need Anti-Semitism To Keep Us Jewish?
Swados asked the Rebbe whether it was his opinion, then, “that the tragedy was not a unique visitation upon the Jewish people, and that it…
Editorial
Soul Lights
Sitting with the Rebbe’s shluchim at the closing session of the Annual International Conference of Chabad Lubavitch Emissaries near the end of November, I felt…
Get Inspiration to your inbox!
Newsletter
Join our weekly newsletter for inspiration and updates
Donate
Find Your Local Chabad Center
Chabad
About Chabad-Lubavitch
About Chabad Lubavitch
The Rebbe
Headquarters
Magazine
Magazine
News
News & Updates
In The Media
Impact
Social and Humanitarian
Social and Humanitarian
Education
Education
Community
Community