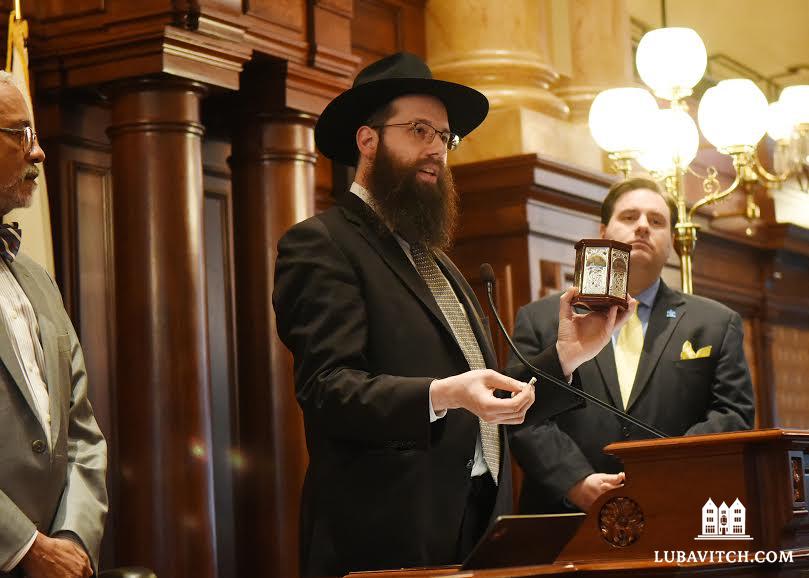 In honor of 11 Nissan, Rabbi Meir Moscowitz, regional director of Chabad of Illinois, was invited to give the invocation at both the state senate and the house of representatives in the Illinois state capitol.

“The Rebbe taught that education is not just about accumulating knowledge; rather, it is about building character and a strong moral backbone,”Moscowitz said. “This is also the theme of the seder: ‘You shall teach your children.'”

After sharing his remarks, he and Rabbi Avraham Kagan, emissary to River North and director of government affairs for Chabad-Lubavitch of Illinois, met with Jewish legislators and distributed shmura matzah and Passover literature.

They also met with Illinois lieutenant governor Evelyn Sanguinetti and other state leaders.

In what has by now become a tradition, Governor signed a proclamation declaring 11 Nissan as “Education and Sharing Day.”

The visit culminated in a ‘model seder’ at the governor’s home led by Rabbi Avraham Kagan and joined by emissary Rabbi Dovid Tiechtel of nearby University of Illinois.

Related Articles
View All
From Cemeteries to Celebration: Jewish Students Spend Spring Break in Berlin
While their classmates were spending spring break in warmer climates, 18 Jewish students from the University of Illinois at Urbana-Champaign traveled to Berlin for a…
Chabad at University of Illinois Opens Hospitality House
Students and parents at the University of Illinois Urabana-Champaign now have a place to unwind and spend a quiet night.
Get Inspiration to your inbox!
Newsletter
Join our weekly newsletter for inspiration and updates
Donate
Find Your Local Chabad Center
Subscribe
|
Log In
Chabad
About Chabad-Lubavitch
About Chabad Lubavitch
The Rebbe
Headquarters
Magazine
Magazine
News
News & Updates
In The Media
Impact
Social and Humanitarian
Social and Humanitarian
Education
Education
Community
Community