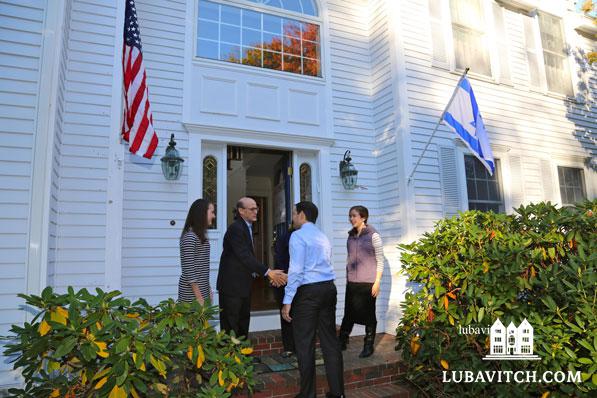 Preparing for the New Hampshire primaries next week, the presidential candidates and their volunteers will do almost anything to win the votes of the Granite State’s citizens. They’ll even make house visits.

“It’s a great way to connect with people and develop a strong personal rapport,” says Rabbi Levi Krinsky of Chabad of New Hampshire. Krinsky should know. Although his daughter Chanchie isn’t running for office, she’s successfully piloting a traveling Hebrew school and has thus learned the value of interfacing with people on their own turf.

“Meeting the children in the intimate setting of their own homes allows for a much stronger bond between us. Our classes benefit from the building of trust between us,” says Chanchie.

Ilana Chasin’s days are impressively packed for a 12-year-old. By the time the clock chimes 6:30 p.m. on Mondays, the Londonderry girl has had a full day at school and three hours of cheerleading practice. Still, there’s one more item on her schedule: an hour and a half of Hebrew School lessons. At Ilana’s home.

The idea of a ‘non-traditional’ traveling Hebrew school came to Chanchie after speaking to parents of Camp Gan Israel campers and other youth programs. “I was hearing this repeated complaint by parents who want their children to attend Hebrew school, but couldn’t figure out how to fit it into their schedules.” Many of these families are spread across the cities of New Hampshire, making it hard to fit the 30-45 minute commute to Manchester, where Chabad is located into their day.

Ilana’s mom, Jeannette, confirms: “I can tell you with confidence that if not for [the new school model], my girls would not be attending any Hebrew School.” She explains that she had experimented with a lot of different Hebrew Schools, but it just wasn’t working. Her daughter’s good grades were dropping because there was not enough time in the day to get everything done.

Looking at the typical day of a young family, where extra curricular clubs and sport practices leave no time for extra commutes, Chanchie, an experienced Hebrew school teacher, began to think unconventionally, and soon devised a model that would work for everyone. Instead of students traveling to Chabad, she’d travel to them, saving parents the drudgery of carpooling and the children, the exhaustion of another commute.

“The benefit of my traveling to the different areas, allows Hebrew School to become not ‘just another chore’. Our class is within a comfortable time frame, on a convenient day, and everyone involved can slip right into learning as soon as I knock on the door.”

Coining it the Hebrew School House Calls (HSHC), Chanchie accepted requests for time slots. Each family looked at their own schedules and found an hour and a half a week that they could set aside. Families with similar schedules and living in close proximity to each other joined the same time slot, in some cases rotating the hosting home. After the first year, the number of students climbed to 30, with nine hosting homes.

“The convenience of the house calls brings people in, and then they realize what they were missing,” said Miri Shpindler, whose two year old son will soon join his older brothers and sister in their weekly session. “When they get a taste of Hebrew school, it makes sense to them to make it a priority,” Her children, she adds, love the idea of having Hebrew school in their own home. It motivates them to “organize and set up the playroom in anticipation” of their teacher’s visits.

Working off what she had used in her past classrooms, Chanchie developed a curriculum modeled on a cooperative approach to education in which the students learn to bring their own abilities to the group effort. Some of the classes have older students aiding the younger ones, benefiting both age groups.Using the popular Aleph Champ program for Hebrew reading, she developed a one-room schoolhouse effect, with students of all different levels working at their own pace.

Capping her classes to eight students, she has the ability to provide individualized attention. “When I’m teaching, I don’t have to worry about a huge class, and I don’t need to focus on the rules or discipline as much. I can put all my focus on the students, and pay attention to what they are excited about.”

At HSHC, children learn not only to read the Hebrew aleph-bet, but they begin to love the holidays and the idea of being Jewish. In the cold New England state, says Chanchie, that’s a big deal. Indeed, Jeanette says she loves hearing the giggles coming from the living room during Hebrew School, where her two daughters and two other girls they hadn’t known before, have now become close friends.

It’s not only the children who’ve made new friends. “I met young Jewish families I never knew who’ve lived right near me,” says Miri. “This model is strengthening our community as well as giving our children the education.”

Co-directors of Chabad of New Hampshire, Rabbi Levi and Mrs. Shternie Krinsky, are gratified. “Watching our daughter tirelessly create and run this program, we’ve learned that not every community is the same, and when you find what your community requires, everyone benefits. We have seen our community grow so much closer since the start of the house calls.”

Related Articles
View All
Chandler, Arizona: Preschool to Chuppah, A Desert Community in Bloom
The postcard arrived at the right moment for the Mazers. Recently settled in Chandler, Arizona (Jewish pop. 4,000), the couple was looking for a Jewish…
Kivun: A New Model for Jewish Charter School Children
A group of second graders sit in a circle in a colorful New York City classroom as their teacher leads them in a guided meditation…
Get Inspiration to your inbox!
Newsletter
Join our weekly newsletter for inspiration and updates
Donate
Find Your Local Chabad Center
Chabad
About Chabad-Lubavitch
About Chabad Lubavitch
The Rebbe
Headquarters
Magazine
Magazine
News
News & Updates
In The Media
Impact
Social and Humanitarian
Social and Humanitarian
Education
Education
Community
Community