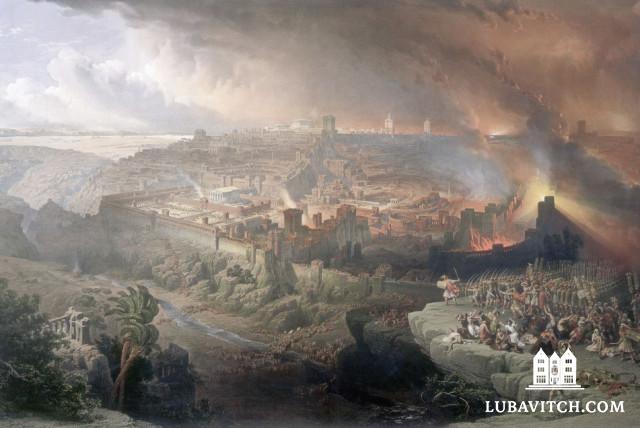 The Siege and Destruction of Jerusalem by David Roberts 1850 (photo credit: Wikimedia Commons)

Our Sages established days of fasting to etch the pain of our past into our collective memory. Nowadays, we seek creative ways to educate our youth about the Holocaust, even as many of those who saw it with their own eyes are still with us. But the Jewish people never forget. We remember the events of thousands of years past.

On Tuesday, we will mark the tenth of Teves. On this day, the Babylonian armies laid siege to Jerusalem, setting in motion the destruction of the Holy Temple and the exile of the Jewish people into the hinterlands of Babylonia. It marks the end of an epoch of tranquility and the beginning of all exiles that have come since. On this day, we commemorate the innumerable tragedies of Jewish history. We remember the destruction of both Temples, the expulsion of the Jewish people from their land, the countless expulsions, persecutions, degrees, and pogroms that have come since.

So much suffering begs the question, for what? Why do the Jewish people suffer so? In our times, the Holocaust, in particular, makes us ask this question. Its monstrous evil seems so shocking, it screams out for answers. Yet, in truth, this burning question has accompanied us through the entire length of history.

In a 1965 letter to Holocaust survivor and author Eli Wiesel, the Lubavitcher Rebbe takes notice of a point we often overlook:

“This is not something new that suddenly arose in our generation; our nation had to face the threat of slaughter and annihilation, heaven forfend, in previous generations as well. The Crusades, for example, were possibly as bad as the Holocaust if you look at the percentages and the atrocities. The only difference was that during the Crusades, there wasn’t even a ray of hope that the suffering would ever end. After the Crusaders conquered the Byzantine Turks, there was no expectation that anyone would save us. The Holocaust was carried out because of the bestial nature of those people, and so allowed at least the hope that the world would be shocked by it and put an end to Hitler, may his name be erased.”

We believe that the world is not a jungle, G-d forbid. We believe that the Creator guides His world and has a purpose for every occurrence. We trust that He pays close attention to even the tiniest movement in the universe. And precisely because of that, we ask for an explanation for the terrible suffering.

Jewish thought has grappled with the question of suffering for thousands of years. The entire book of Iyov (Job) focuses on this topic. Many answers exist, but there is another approach to facing tragedy. Instead of attempting to explain it, we can leave it as a screaming mystery.

This is not, G-d forbid, an abandonment of faith. On the contrary, it is because we believe that there is a judge and justice that we fail to understand. We believe that no man can lift his finger without divine sanction. And therefore we scream to the creator: “Ad Mosai?” —

All the pain and suffering that occurs merely strengthens our belief in the goodness we can expect to come. After great destruction, the seeds of rebirth take root. The greater the pain, the deeper the joy which will eventually be born. Our response to suffering has always been to pray for and anticipate the coming of Moshiach and redemption.

In the original Yiddish version of Eli Wiesel’s book “Night,” he recalls how Buchenwald robbed him of his ability to cry. In his account of an audience with the Rebbe, he pleaded, “Make me able to cry!” The Rebbe shook his head and said: “No, that is not enough; I will teach you to sing.”

Related Articles
View All
Weekly Torah Thought
Happiness is Next to Kindness
Practically speaking, how does one "add in joy"?
Weekly Torah Thought
Two Counts, One Number
What are we supposed to do today with the idea that everyone was healthy?
Weekly Torah Thought
Moses Lighting the Menorah?!
Why suddenly does the Torah emphasize that it’s Moshe who is delivering G-d’s message to the people?
Weekly Torah Thought
How To Host A King
What food will you serve? How will you address the king?
Get Inspiration to your inbox!
Newsletter
Join our weekly newsletter for inspiration and updates
Donate
Find Your Local Chabad Center
Subscribe
|
Log In
Chabad
About Chabad-Lubavitch
About Chabad Lubavitch
The Rebbe
Headquarters
Magazine
Magazine
News
News & Updates
In The Media
Impact
Social and Humanitarian
Social and Humanitarian
Education
Education
Community
Community