Grandson of Holocaust Survivors: Remember the People, Make a Difference 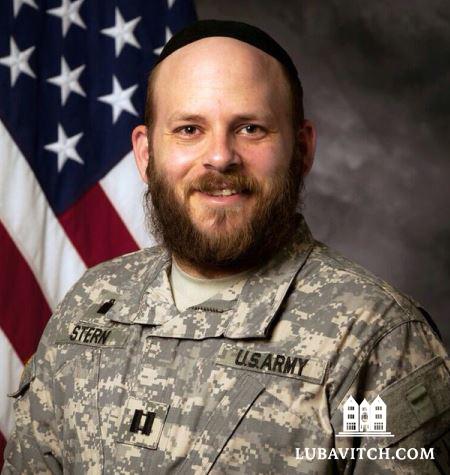 A 19-year old boy named Chaim Stern leaned over the railing of the ship he was traveling on. Nearly two years before, he had left his homeland of Czechoslovakia to escape persecution from the spreading Nazi threat. Now, as he reached British held Israel, the ship, full of refugees like himself, was turned around because they did not have the right documentation. As night fell, Chaim, along with other Jewish refugees, slipped over the side of the boat and swam to the shore. Those who could make the swim found asylum in a Jewish community, while those who could not, were returned to Europe.

While Chaim escaped, his father starved to death when the Nazis blockaded their village. His mother and two younger brothers were killed in a gas chamber in Auschwitz, and his sisters were put to work in labor camps, surviving the war under terrible circumstances.

Nearly 70 years after the atrocities of the Holocaust, Chaim’s grandson, Chaplain (Capt.) Menachem Stern, an orthodox Jewish chaplain, serving in Regional Command (South), and a native of Brooklyn, N.Y., shared the story of his family’s experiences with a group of service members on Kandahar Airfield, Afghanistan, during a Days of Remembrance Observance on April 28.

“Both sides of the family are survivors,” Stern said. “My grandfather was 19 years old when he arrived at the borders of Israel.

“With my grandmother, the Jewish Federation provided the Kinder Transport,” he said. “She moved to Britain, then to Israel. She was 14 when she got there; she left her home when she was 11.”

Stern said his grandmother was separated from her family, knowing she may never see them again.

Between 9,000 and 10,000 children were rescued via Kinder Transport from 1938 to 1940, many of whom never saw their families again, according to the U.S. Holocaust Memorial Museum website.

“When my grandfather told me the story of his escape from Europe, and when my grandmother told me of her escape from Germany, they were in great detail,” Stern said. “They were so detailed so I would remember it, and so I can tell my children in detail. They can take that firsthand experience and take ownership of it, to make it theirs. We talk about it so it does not happen again. For my children they would not just be two out of six million, they are theirs.”

Stern said remembering details of the Holocaust, and the stories of the people who lived through it are vital to preventing history from repeating itself.

“I have attended Holocaust remembrances, and they talk about the six-million dead and what happened, but I feel there is a disconnect that comes when we hear the statistics,” Stern said. “These were real people. We want soldiers, and everyone, to realize this is not just something that happened a long time ago in a distant land. There are people still alive who were there.”

The U.S. Congress established the Day of Remembrance as the nation’s annual commemoration of the Holocaust and created the United States Holocaust Memorial Museum as a permanent living memorial to the victims. The museum also endeavors to inspire citizens and leaders worldwide to confront hatred, prevent genocide and promote human dignity through educational programs and global impact, according to their website.

“When we are faced with danger, we need to recognize that danger and do what we can to stop it,” Stern said. “If I am a person walking down the street, and I see a hate crime, I need to stop it. When we let it go, or start justifying what is and what is not a hate crime, we become part of the problem.”

Stern said despite the lessons learned from the Holocaust, we still see hate from one group of people against another today, including the 1994 genocide in Rwanda of approximately 800,000 people, predominantly Tutsis, who opposed the government. Other events, such as the attempted registration of Jews in Ukraine by pro-Russian militants and concerns of ethnic cleansing in Syria are more examples of the dangers of forgetting the past, he said.

“I see that these are people’s lives,” Stern said. “What bothers me when I read this news is that it is a repeat of history. We need to do our part to stop hate and bring unity to the world … to improve the lives of the people around us.”

Stern said that sense of a greater mission and the unity in the military are some of the reasons he serves in the Army.

“In WWII, we took great losses, but we won because of that unity. [I like] knowing I am part of a great, amazing team working toward a common goal of making the world a better place for everyone.”

In his remarks at the observance, Stern recited the words of Chaplain (Capt.) Eli Bohnen, who liberated Dachau with the 42nd Infantry Division. Bohnen wrote to his wife the day after he visited the death camp, “Nothing you can put in words would adequately describe what I saw there. The human mind refuses to believe what the eyes see. All the stories of Nazi horrors are not exaggerated; rather they are underestimated …”

“His words echo the accounts of American troops, who witnessed the horrors and atrocities of the Nazis,” Stern said, stating that the American troops liberated the Jewish people.

Liberation is more than an act of coming in and unshackling; it is an act of bringing life back to people; giving them a second chance at life, he added.

“The countries we touch are affected positively through our actions,” Stern said. “This is why we need to remember. This is how the individual soldier makes a difference. We have the power to change our surroundings. Ultimately, our actions or inactions have second and third orders of effect. These actions or inactions will determine the good we do in the world and how we impact the world around us.”

Related Articles
View All
Holocaust
Memories of the Heart
Elisha Wiesel speaks with Lubavitch International about his famous father and raising his children to love Yiddishkeit
Holocaust
Personal Journeys: A Child of the Holocaust
Dozens of eyes silently follow the slender man on the speaker's dais. The only sound in the hall is his voice, which captivates the audience.…
Holocaust
Adopted at Age 91, A Holocaust Survivor Finds Love and Hope
Patty Picarelli wasn’t very hopeful as she dialed the number for the Chabad Jewish Center of Barrie, Ontario. To Read The Full Magazine Story Log…
Holocaust
Holocaust Survivor Meets With Students Pictured In Swastika Photo
The rabbi invited Holocaust survivor Eva Schloss, the stepsister of the famous diarist Anne Frank, to share her story of survival and her message of…
Get Inspiration to your inbox!
Newsletter
Join our weekly newsletter for inspiration and updates
Donate
Find Your Local Chabad Center
Subscribe
|
Log In
Chabad
About Chabad-Lubavitch
About Chabad Lubavitch
The Rebbe
Headquarters
Magazine
Magazine
News
News & Updates
In The Media
Impact
Social and Humanitarian
Social and Humanitarian
Education
Education
Community
Community