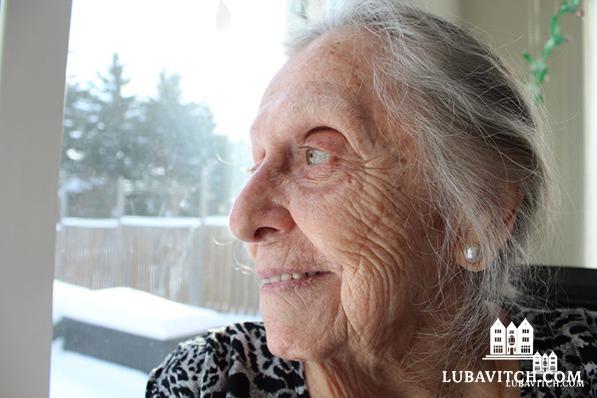 Adopted at Age 91, A Holocaust Survivor Finds Love and Hope

Back to Issue
By Ashira Weiss

Patty Picarelli wasn’t very hopeful as she dialed the number for the Chabad Jewish Center of Barrie, Ontario, fifty miles north of Toronto. The single mom of three had already reached out to thirty-four welfare organizations, governmental and private, Jewish and non-Jewish, both in Barrie and Toronto. None of them had been able to help. When the last call to a Jewish agency in Toronto again resulted in a no, Patty began to cry; she wasn’t Jewish and was giving up so much for her Holocaust survivor friend, was there no one who would help her out? The tears seemed to affect the lady on the other end of the phone line, because she took a few more minutes to refer Patty to the Chabad Jewish Center.

In November 2019, Patty and her children had ‘adopted’ a 91-year-old woman named Madeline Jug. A child survivor of the Holocaust, Madeline was left with a life-long injury to her leg. The wound was inflicted by a Nazi who threw a knife at her when he saw her give a little bit of her water to a friend stricken with typhoid in Krakow, Poland. That injury saved her life as she and her friend were taken to the hospital where a German-British doctor arranged for them to be smuggled to a safehouse in the Austrian countryside.

Patty met Madeline, a friend of her father’s, in 2005 and the two stayed in touch even after his passing. In November, Patty heard that Madeline, no longer able to live on her own, had moved into a home where she was being mistreated, even being called “dirty Jew.” The younger woman was horrified. The disease and malnutrition that Madeline experienced as a child left her unable to have children. Her husband passed away years ago leaving Madeline alone in her old-age. “Our elderly gave up so much for the next generation. It is our duty to make sure they are surrounded by love and support in their later years,” Patty told Lubavitch.com.

So she rented a U-Haul and she and her children moved Madeline and her belongings to their modest home. No longer able to climb stairs with her injured leg, the family emptied their living room and dining room, and put up a door to provide Madeline with some personal space. “The bathroom was an issue,” Patty said. There is only a powder room on the main floor so Patty rigged a hose to the sink so she could help Madeline wash. But she wanted to make her more comfortable so she began to brainstorm ways to raise the funds for a renovation.

After selling her TV and anything she could get a little money for, Patty started a GoFundMe fundraiser. To date, the page shows a total of $590 Canadian, raised from nine donors. Patty reached out to celebrities and friends asking that they share her page to no avail. Thus began the thirty-four-phone-call-marathon. “I wasn’t asking for a lot and I wasn’t asking for myself,” Patty says, but she was appalled by the indifference. “I was shocked that this is how our generation respects our elders. They persevered through war to build our country and now, when they need it most, people act as if they are disposable,” Patty says.

It was Chanukah time when, with trepidation, Patty dialed the number for the Chabad Jewish Center. Chabad representative Muci Nakkar listened to Patty’s tale and immediately offered to help. She invited Patty to meet with the city’s mayor and a member of parliament who would be attending the public menorah lighting ceremony that she and her husband, Rabbi Mendel, were hosting. The politicians were polite and assured their assistance, but didn’t come through. “They looked at me, shook my hand and said, ‘we’re not going to let you down,’ but once the cameras had gone, they didn’t respond to any of my calls,” Patty says.

The Nakkars heard that Madeline’s plight was brought up at a Temple where she had once been a member. They decided it was out of their purview as Madeline was no longer a member. “At her age she won’t be able to enjoy the renovations for much longer so it’s not worth our investment,” this same organization had told Patty.

“We realized that we were the only ones willing to help, but we didn’t have the resources to pay for the renovations on our own,” Muci says. So they posted a request on the Chabad center’s Facebook page and asked their friends to pitch in. “The community responded quickly and generously,” says Rabbi Mendel. Within twenty-four hours they had raised $2,500.

Sultana Mechali, a member of the Chabad Jewish Center, went to the local Home Depot. She explained her cause to the store’s assistant manager. “He said, ‘choose what you need,’” Sultana says. “He gave us about three quarters of the supplies needed, free of charge.” The owner of MRK Contractors and Renovations, another Chabad community member, pitched in too, offering to do the $8,000 renovation for just $2,500.

The bathroom renovation and a ramp to the front door were completed mid-February. Patty was overwhelmed by the generosity suddenly shown to her. “I can’t even put into words what it means that someone reached out. Thank you isn’t enough to describe the gratitude Madeline and my family feel. The Nakkars and their community really stepped up to the plate when absolutely nobody else would,” she says.

On February 26, Madeline suffered a heart attack and was sent to the hospital. Patty and her children visited every day until March 17 when the hospital closed its doors to visitors due to the COVID-19 pandemic. They continued to communicate virtually until Madeline was released back into Patty’s care a few days ago. With much in short supply these days, Patty had a hard time finding the medical supplies needed. She improvises, using a potato to clean a surface wound at the time of this interview in lieu of antibiotic cream.  “It’s been a challenge because we have to be extra careful and the kids have to remain socially distant and are no longer able to help me with her care,” she says.

Like Patty, Madeline has a fighting spirit. She keeps promising her caregiver that she will be feeling healthy for Patty’s birthday in September so she can make her a special dinner. Patty is hoping to raise some more money by then so she can have the kitchen made accessible to Madeline and add a ramp to the backyard so that Madeline can enjoy the outdoors. She is also seeking government assistance to hire a nurse to assist in the older woman’s care. “Madeline is funny, she has a heart of gold and is so accepting of everyone, but the most incredible thing is her positive outlook on life, even with all she’s been through,” Patty says. “I think she’ll live beyond 100 and I’ll do all I can to make these years comfortable and full of love and joy.”

To support Patty and Madeline visit www.JewishBarrie.ca/donate and write ‘Madeline Jug’ in the notes.