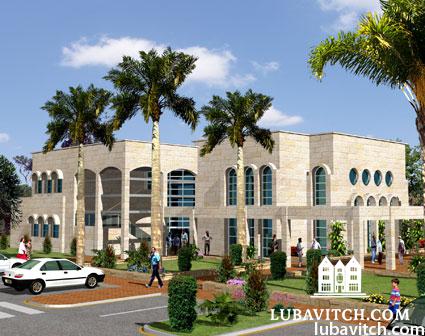 (lubavitch.com) Flying virtually around mountains and over seas, Adult Jewish education students in Carmiel are experiencing the Torah’s account of the Exodus from Egypt from a bird’s eye view using the interactive, three dimensional maps of Google earth.

A program of Chabad in Carmiel’s Jewish Learning Institute, students were guided by director Rabbi Mendy Elishevtiz to the slave labor Egyptian cities of Pitom and Ramses before tracking the Jewish exodus as it marched toward the splitting Red Sea on its way to Mount Sinai.

“Based on the traditions and research, we mapped out a visual experience of the Exodus experience,” said Rabbi Elishevitz. “Nothing is known one hundred percent, but it’s very convincing when you get down to ground level and see it on the map. It feels like you are there.”

The internet-based program lets viewers fly from galaxies in outer space to anywhere on Earth, viewing rich geographical content, maps, terrain, and 3D buildings via satellite imagery. Because Google Earth allows users to save toured places and share them with others, Chabad rabbis around the world have added the map experience to enhance their teaching of the subject.

Rabbi Elishevitz told Lubavitch.com that he distributed his file of locations to colleagues via the ShluchimExchange Network which facilitates communication and collaboration among Chabad rabbis worldwide.

Many have already downloaded the maps and a new, updated version is expected to be available by next week. The adult educational program is planning on completing the project by Passover and developing it into its own course.

“The flight from Egypt was never taught like this before.”

The interactive Exodus class is one of many being offered at the adult education center which weekly teaches 60-70 students. Borrowing an American academic style and marketing approach, the courses have grown in popularity since Rabbi Elishevitz arrived two years ago in the mostly secular community of immigrants in Carmiel.

“Many people have preconceived notions about Judaism which prevents them from exploring their curiosities,” said the rabbi who studied and trained extensively in America. “Our approach is reaching out to people who want to learn but feel uncomfortable entering a synagogue.”
The Institute is housed in its own facility, separate from Chabad of Carmiel’s synagogue and schools, and features a modern, comfortable lecture hall.

“Our students don’t feel forced to commit to things and they are open to learning. Most are usually surprised and shocked when they discover what Torah and Judaism are all about.”

Shattering stereotypes he says, is his biggest challenge in reaching out to the community of about 60,000. Located in the Galilee region and designated as an immigrant absorption center, Carmiel is one of Israel’s largest and fastest-growing suburban centers, boasting immigrants from over 75 countries around the world.

Carmiel was created in 1964 as part of the Israeli government’s policy to strengthen the Galilee. It was named after the historic valley in which it is situated, “the Beit HaKerem Valley” mentioned in the Mishna and the Talmud, and the olive vineyards surrounding the city “Karme-El” (the vineyards of G-d).

The Rohr Jewish Learning Institute has become a vital educational resource engaging Jewish people worldwide as it raises their academic and practical participation in Jewish life.

“Our educational approaches harness the power of modern technology to reach and teach each and every Jew.”