Fun and Festive After Praying and Fasting 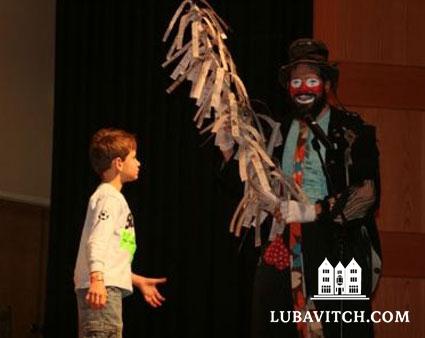 The holiday of Sukkot commemorates the makeshift huts that the Jewish people dwelled in for forty years in the desert. Alternatively, it’s the clouds of glory that protected the Jews during their travels. Either way, the idea is to spend time in the Sukkah, and take meals there throughout the eight-day festival.

So this week, Chabad Houses across the world are running a cornucopia of events from the pun-dependent "Pizza in the Hut," to the exoticism of "Cirque Africa." Coming off the High Holidays, where Chabad Houses regularly chart overwhelming attendance, getting a crowd for Sukkot requires creativity and heavy promotion.

"For community type events, Hannukah and Pesach are much easier. Sukkot isn’t as recognized. It’s at the end of the High Holdiays," Rabbi Zalman Grossbaum, director at Chabad of Livingston, told Lubavitch.com in an interview. In the past, Grossbaum has booked concerts and large carnivals for the Chabad House, which partners with the Friendship Circle. This year though, the idea for the Kenyan Safari Acrobats was passed along from another Chabad House.

Grossbaum said that the response was overwhelming, with over 650 people in attendance. "We basically sold out," he said, chuckling. "We had an enormous response."

Specifically, Livingston’s celebration was a Simchat Beit Hashoevah ("Rejoicing of the Water Drawing"), a festive event during Sukkot that commemorates the water drawing ceremony of the Holy Temple. The tumblers of the Kenya Safari Acrobats were thus not only great crowd-pleasers, but also a connection to that ancient festive day. In the Temple, the Rabbis would juggle torches to please the crowds.

Grossbaum’s crowds are a potpourri of Judaism–from religious Jews already affiliated with Chabad and other Orthodox Jews, to the non-affiliated and everyone in between. "We had Jews from all walks of life and all affiliations," Grossbaum said, avoiding denominational categories.

In addition to using tried events that other Rabbis have found successful, Grossbaum plans events for the community members involved in his Chabad House. But when trying to court newcomers, his promotions include mass mailings, advertisements, and press releases. "It is mostly just a matter of finding the right event that will draw people to participate in Sukkot," he says.

Grossbaum’s community seems to agree with his evaluation of Cirque Africa as a success. The event was beautiful and totally out of the ordinary, so it attracted everyone and so many different communities," Phyllis Goldberg said.

Rabbi Berel Wolvovsky of Chabad of Silver Spring is one of many Rabbis who runs an event called "Pizza in the Hut." The name is a takeoff of the non-Kosher fast food restaurant, Pizza Hut. The advertisements for the event show the original Pizza Hut logo, with the letter I replaced with a lulav and etrog. Experience has proven that if the advertisement seems witty or fun, people will attend.

Rabbi Shraga Sherman of Chabad of the Mainline in Philadelphia is running his Pizza in the Hut tomorrow night. On the ubiquity of the name, he says "It’s a very catchy title, and the idea of people viewing the sukkah as a fun place to gather is a thing we want to promote. Following up the high holidays with a more fun-filled program is very well-received by people."

The sum of a Rabbi’s expenditures, of course, come down to the mitzvot performed, and Grossbaum’s 650 attendees only indicate his success in that area. "It’s important that the programming we do is really cutting edge and makes [Judaism] exciting for the families," Grossbaum said. "If the show attracted them, they were able to fulfil very important mitzvot."

"I imagine 300 people did the mitzvah of lulav and etrog for the first time this year," Grossbaum shared proudly.