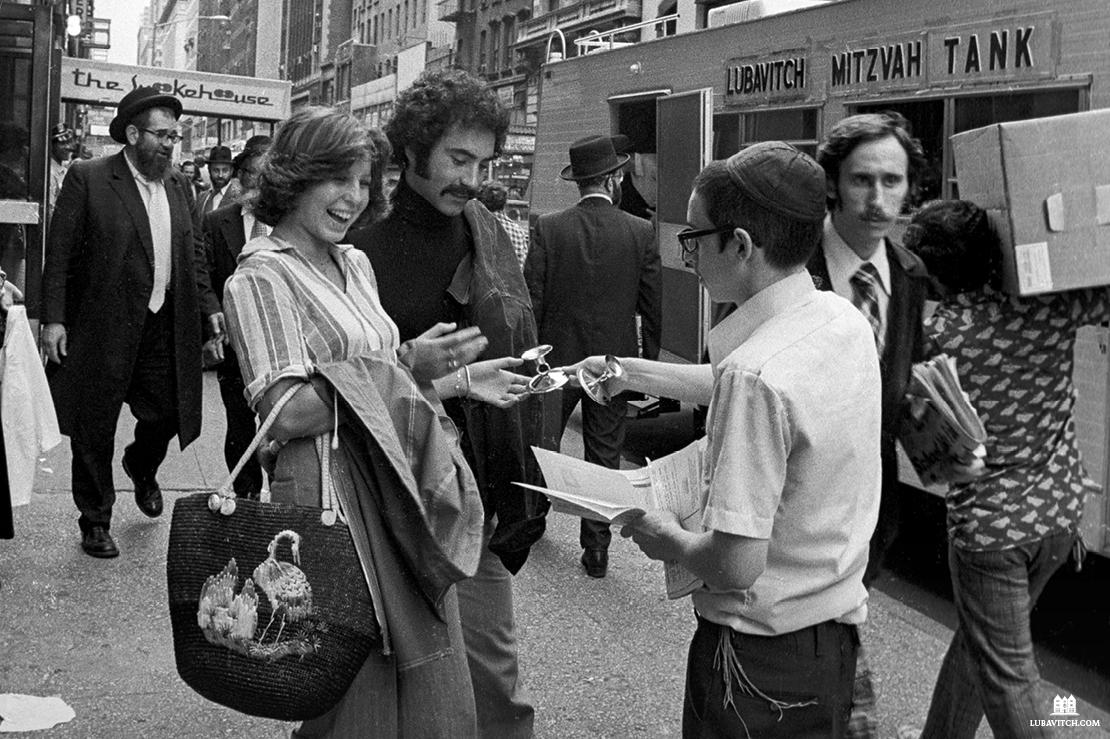 “Excuse me, are you Jewish?”

A Mitzvah Tank on the streets of Manhattan, 1975
Photo Credit: JEM; The Living Archive

Back to Issue
By Rena Udkoff

Mitzvah Tanks have been a fixture on the streets of New York City for nearly five decades. Today, they can be spotted in many places where Chabad is active. Parked on street corners and near college campuses, these specially decked out RVs carry rabbinical students who invite Jewish pedestrians inside or curbside, with the offer to connect over a mitzvah.

The unconventional approach was a hit in the countercultural heyday of the ‘70s. But in an age of targeted online ads and sophisticated social engagement techniques, why does Chabad continue to canvass for Jews on the street? Does stopping people at random to talk about Judaism even work? And what actually happens inside a Mitzvah Tank?

Ubiquitous, peculiar, and at times, controversial, Mitzvah Tanks elicit mixed reactions wherever they go. Lubavitch International takes a deep dive into the inimitable world of the repurposed RVs that bring old-school Judaism to high-traffic metropolises around the world.

Does stopping people at random to talk about Judaism even work? And what actually happens inside a Mitzvah Tank?

To Read The Full Magazine Story

Log In Subscribe
Subscriptions to read premium magazine articles start at less than $.35 per week
If you already have a subscription please request digital access here
SIDEBAR

Tweeting from the Tank

The RVs playing Jewish music round the corner of a busy downtown street, and Chasidic yeshiva students at the vehicle’s windows greet passersby with “Shalom!” People on the street pull out their smartphones, snap photos of the spectacle and share them with friends. The unpredictable cultural display is social media catnip.

But if Mitzvah Tanks had to choose their favorite social media platform, it would have to be Twitter. The platform of short thoughts shared with strangers bears a striking similarity to the invitational person-on-the-street “Are you Jewish?” conversations. From #AreYouJewish to #ChabadFoundMe, people love to tweet about their experience. One year, during the annual pre-Passover parade, the phrase “Mitzvah Tanks” hit number 2 on Twitter’s list of trending topics for New York City.

Rabbi Zushy Rivkin manned the @MitzvahTank Twitter account for four years and noted that people were always surprised when he responded to their tweets. “People openly tweet their various thoughts about the Mitzvah Tanks, but they don’t expect us to also be online!” said Rivkin. The online conversations can even lead to in-person interactions. When Jack F. from Miami tweeted, “Aww! Just missed a Mitzvah Tank. Wish I could have stopped in,” Rivkin replied instantly: “Where are you?” Locating the young man on 57th Street, he quickly texted the closest Mitzvah Tank to circle back so that Jack could have his own mitzvah experience. Standing by with his computer and cell phone, Rivkin has connected people with their local Mitzvah Tank from Golders Green, London to Melbourne, Australia.

“If it’s ‘only’ in that many cities, it is not that only!” says Rivkin. “Many people think their experience is unique to their locale, but the truth is we’re global!

“We’ve been doing this for almost 50 years. I promise you, if you’ve thought up a clever response to the question ‘Are you Jewish?’ we have heard it hundreds of times before!”

Why the name “Tank”? Isn’t that a little aggressive?

The name “Mitzvah Tank” was coined by the Rebbe. He explained that a tank is designed to go places no other vehicle can go. So too, the Mitzvah Tank can reach Jews who might otherwise be missed.

Why do I sometimes see one Mitzvah Tank parked on a street corner and other times see a parade of 50 crossing the Brooklyn Bridge?

Different tanks for different times! In New York City, three to five Mitzvah Tanks go out weekly, usually on Fridays (“Get your Shabbat candles here!”). These are your everyday Mitzvah Tanks. Other occasions, usually an important date on the Chabad calendar or a Jewish holiday, call for pomp and circumstance. That’s when you’ll see endless convoys, parades of tanks. On the holiday of Sukkot, they are outfitted as “Sukkah mobiles.” On Chanukah, there are scores of RVs along with hundreds of private cars topped with menorahs. The largest parade of the year is usually pre-Passover, a day that coincides with the Rebbe’s birthday, when thousands of pounds of shmurah matzah are handed out.

Was that a real Mitzvah Tank in the background of my favorite TV show?

Probably! Mitzvah Tanks have become an iconic part of the Big Apple’s landscape, and they’ve made their way into over a dozen popular movies and TV shows. Some film directors have even requested a Mitzvah Tank in the backdrop of a shot to give the scene local flavor. If it means reaching more Jews who may see us on the screen and be inspired to look into their Judaism, we are in!

Related Articles
View All
Outreach
Life Sketches: A Rabbi and a Priest
So a rabbi and a priest walk into a bar. No, this is not a joke, it’s a true story. But it wasn’t a bar,…
Outreach
Life Sketches: Tevye in the 99-Cent Store
I walked into the 99-cent store on Poway Rd. and noticed a man smiling at me so I gave him a big “Hello!”
Outreach
Life Sketches: Tefillin in the Eldridge St. Shul
This past summer, my wife and I and our 12-year-old daughter spent a few days in New York for her bat mitzvah. We love Jewish…
Outreach
Life Sketches: The Pushka in My Hand
Mark,* the father of a six-year-old girl, recently lost his wife. I listened silently to his heartbreaking story. Was there anything I could do for…
Get Inspiration to your inbox!
Newsletter
Join our weekly newsletter for inspiration and updates
Donate
Find Your Local Chabad Center
Subscribe
|
Log In
Chabad
About Chabad-Lubavitch
About Chabad Lubavitch
The Rebbe
Headquarters
Magazine
Magazine
News
News & Updates
In The Media
Impact
Social and Humanitarian
Social and Humanitarian
Education
Education
Community
Community