Employees At Largest Jewish Non-Profit in Argentina: Proud to Belong 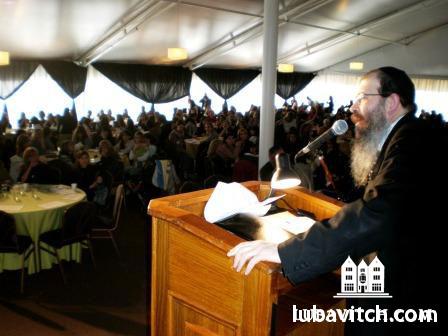 Not a job to become passionate about. Unless of course, you discover as Gaby did earlier this week, that your work puts you in the company of a dynamic team of people driven to change a not-so-small part of the world through their shared energy and their commitment to a cause far greater than the sum of its parts.

Chabad Universo, a one-day conference held this past Tuesday at a convention center in Buenos Aires, was the brainchild of Rabbi Tzvi Grunblatt, director of Chabad activities in Argentina. With 750 paid employees working at any of Chabad’s 33 centers nationwide, Chabad of Argentina is the largest Jewish non-profit employer in the country.

The idea was to bring the employees, from the bell boy to the school headmaster, from Chabad of Tucuman to Chabad of Santa Cruz, the Shluchim, as well as some 150 of Chabad’s supporters, under one roof for a day, where they would experience the energy of their collective mission and share the passion that fires its dynamic human resources team.

From community focused services to Jewish educational institutions and humanitarian programs that have earned the esteem of the country’s educational and social services top brass, Chabad of Argentina has established a culture of Jewish values that distinguish its programs and its spirit. The eclectic mix of individuals committed to a shared goal that filled the hall on Tuesday, pointed to an organization that has managed to embrace diversity while standing firmly rooted in its Jewish, Chasidic principles.

Rabbi Grunblatt, the man at the helm, is ever mindful of the individual, small and painstaking steps taken over many years by dedicated Shluchim that have raised the profile and substance of Jewish life through increased Jewish involvement, Jewish literacy and Jewish pride.

Speaking to his employees, to the Shluchim and supporters in the packed hall, he contrasted Chabad in Argentina today with its early beginnings, when the late Rabbi Berel Baumgarten arrived here at the request of the Lubavitcher Rebbe, Rabbi Menachem M. Schneerson, of blessed memory, some 50 years ago to begin to lay a foundation for Jewish life in this country.

“It is important to recognize success like this doesn’t come easy, but demands years and years of hard work and a commitment to working with people one by one,” he said.

Eduardo Elsztain, Treasurer of the Latin American World Jewish Congress and a successful South American developer who is also President of birthright and Hillel in Argentina, and honorary president of Chabad there, knows the challenge of growth.

Locating Chabad’s success in the personal quality it brings to all of its activities, and the personal attention its representatives invest in their work, building enduring relationships with everyone who crosses their path, Elsztain spoke of the care that the employees and Shluchim need to take in protecting this quality even as the organization grows big.

Rabbi Shlomo Tawil, Chabad emissary in Rosaria, encouraged his fellow Chabad representatives to take a bolder approach and recruit yet additional Shluchim in their respective cities. And Mr. David Koner, a lay leader, recalled a meeting with the Lubavitcher Rebbe when he was a 19 year old, and spoke of how that continues to inspire him many years later.

Employees at the event met many Chabad shluchim for the first time. How to understand the sense of mission that pervades everything the Shluchim do? How to understand why they go to some absurdly far out places, where facts and figures that add up to one Jewish family make it a poor candidate for an investment by an organization with precious limited resources?

Rabbi Yossi Jacobson, a popular Chasidic speaker, illuminated the role of the Chabad representative as explained by the Rebbe in his own teachings. He identified the characteristics of a Chabad emissary which include the ability to regard others with love not judgment; the ability to discern the soul within every individual; the ability to sustain joy in Jewish life, and finally, the willingness to go where others refuse to go, for the purpose of reaching out to people in need.

By the end of the day, employees understood the mission that drives Chabad. They understood why Rabbi Grunblatt sends rabbinical students out to Patagonia, where Argentina meets Antarctica and there are only two Jewish families. And they were brimming with pride, many said, to learn that they are a part of this exciting organization.

Professor Gustavo Dvoskin, headmaster at the Tabicinik school where Gaby works, brought his entire staff—100 school employees, to the event. “It was magnificent,” he told Lubavitch.com.

“My people were so impressed to see that they belong to an organization that achieves so much in the country. They’ve never seen anything like this event and this energy, and it gave them a real feeling of pride to be part of this universe.”

At the end of the day, the individuals who oil the wheels of Chabad stayed on. They wanted to talk about strengths of Chabad’s programs, “but also about where we are lacking,” Rabbi Grunblatt said.

The group identified a segment of the population that is not being adequately addressed. “Young mothers. We’re still not doing enough for young mothers, and we need to develop programs geared specifically to them.”

Donors also talked about the nature of giving charity, and why they are drawn to give to Chabad.

When asked what specific activities Chabad of Argentina does to cultivate donors, Rabbi Grunblatt said, “We don’t cultivate donors. We reach out to people. We draw them in to our growing family.”

Related Articles
View All
UNICEF Releases Book on Chabad’s Ieladeinu Child Care Program
(lubavitch.com) UNICEF leaders, human rights experts and community representatives joined Chabad-Lubavitch of Buenos Aires on Tuesday at the Centro Cultural Borges arts center to formally…
Young, Jewish and Unaffiliated: South American Jews Revisit Jewish Identity
(Lubavitch.com) In a country where the intermarriage rate hovers at 75 percent, every excuse to promote Jewish marriage becomes an opportunity that Chabad-Lubavitch representatives seize upon…
Features
Remembering The Struggle for Russian Jewry
Ninety-three years ago today, Rabbi Joseph I. Schneersohn (1880-1950), sixth Lubavitcher Rebbe, and the leader of Russian Jewry at the time, was freed from Soviet-imposed…
Features
Wordsmith: Tamim
The tamim is unflappable. He does not sway with the winds of change, nor bend to meet the expectations of others. He is a simple…
Features
Remembering Rebbetzin Chana: Jewish Feminine Role Model
Rebbetzin Chana Schneerson, a feminine role model of Jewish activism and proponent of Jewish scholarship, mother of the Lubavitcher Rebbe and wife of Rabbi Levi…
Features
Defying Religious Stereotypes on Israel’s College Campuses
By the time Zehavit Mohager, a psychology student, began her studies at the University of Haifa at age 23, she had already completed her army…
Get Inspiration to your inbox!
Newsletter
Join our weekly newsletter for inspiration and updates
Donate
Find Your Local Chabad Center
Chabad
About Chabad-Lubavitch
About Chabad Lubavitch
The Rebbe
Headquarters
Magazine
Magazine
News
News & Updates
In The Media
Impact
Social and Humanitarian
Social and Humanitarian
Education
Education
Community
Community