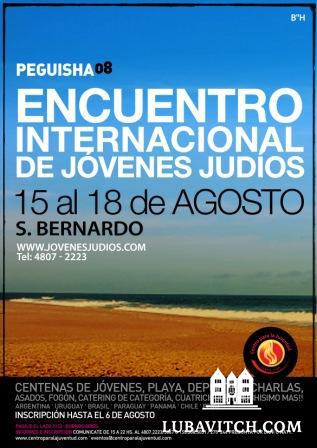 (Lubavitch.com) In a country where the intermarriage rate hovers at 75 percent, every excuse to promote Jewish marriage becomes an opportunity that Chabad-Lubavitch representatives seize upon with enthusiasm.

Tu-B’Av, or the 15th day of Av which fell this past Saturday, is a Jewish “valentines” day of sorts. In Temple times, says the Talmud, young Jewish maidens would go out into the fields where eligible bachelors would court them, and Jewish marriages would result.

Once a year, then, around Tu-B'Av, Chabad of Argentina hosts a four-day encounter (Peguisha), for young men and women from all of South America.

Coinciding this year with a national holiday weekend, the Peguisha drew 300 Jewish students, ages 18-30 from Argentina, Uruguay, Paraguay, Panama, and Brazil, to the S. Bernardo tourist resort for a four-day spiritual/social immersion.

The event, says its organizer, Rabbi Shlomo Levy, director of the Chabad adult educational program in Buenos Aires, “introduces these students, many of whom come from non-observant backgrounds, to a new world.”

The opportunity to mix and mingle with other South American Jews in an inspired, Jewish setting seems an excellent formula for achieving a Jewish awakening. Lively Shabbos dinners—a perfect context for the topic of Jewish marriage, a speed dating evening, followed by a discussion on Jewish dating, and a symposium on the issues of mixed marriages, packed four days of food for thought that may well translate into new life decisions for many.

“At past seminars, we have really seen results,” says Rabbi Levy. “Some of the participants come from communities of not more than five Jewish families, with no Chabad House. Some of them, who learn about this weekend through the internet, go straight home and say goodbye to their non-Jewish partners.”

Deborah, 28, a professional graphic designer from Buenos Aires, came away with something else.

“I live life in the fast lane, but coming here has shown me a different kind of existence. I can slow down and enjoy life without being too worried about the future.” Recently married, Debra found the seminar very useful for herself and her husband’s spiritual journey in Judaism. “We’ve already decided we want to add a little more to our Jewish observance every day. Coming here has helped us because it has shown us that it is easy to add more and to enjoy being Jewish,” she says.

Presenting at the Shabbaton were a dozen or so Chabad representatives from South America who explored the Jewish perspective on relationships, women’s issues and other concerns of the 18-30-something career minded individuals.

“It’s a time when many of them open their minds and hearts and make decisions,” said Rabbi Levy, and this experience is intended to give them information and a Jewish, Torah perspective to help them in making critical life choices.

Moshe, 22, a student from Buenos Aires, agrees. “The Peguisha brings Jewish youth back to their roots. It strengthens Jewish identity. I’ve seen people who have never observed Shabbat come out of here ready to do so.”