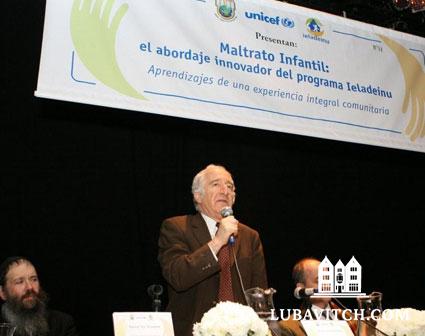 Mistreatment of Children: The Innovative Approach of Ieladeinu, The Comprehensive Response of a Community Committed to Children, published by Editorial Lumen, is based on UNICEF’s two year observations of Ieladeinu, and captures some of the remarkable results seen throughout the program’s six years of work with over 300 abused or neglected children.

Written by Ieladeinu’s director Karina Pincever, each chapter of the 325 page book addresses an obstacle faced by one of Ieladeinu’s 80 professionals and solutions that helped children work through their traumatic home lives. The aim of the book is to systemize Ieladeinu’s approach, which is modeled on Jewish ethics, psychology and human rights, so it may be replicated by other programs.

U.N. representatives praised the Chabad sponsored Ieladeinu for its work as the only Argentine Jewish organization devoted to protecting children. Speaking before a crowd of some 300, UNICEF Argentina Deputy Representative Ennio Cufino pointed to Chabad’s Ieladeinu program as an example of partnerships that UNICEF forms with organizations that respond to humanitarian needs, and credited Ieladeinu with making a significant contribution to the children at risk.

Dr. Bernardo Kliksberg, the U.N.’s principal advisor for Latin America delivered keynote addresses. “Every three seconds a child in the world dies, and most of those deaths could be prevented.” The book, he said, is the result of real action by Ieladeinu to care and protect children at risk.

UNICEF embarked on documenting Ieladeinu’s work after a study uncovered the impact of the program’s interventions. The study found Ieladeinu had made notable strides toward the betterment of children’s lives. Through its system of children’s homes, day shelters and family assistance programs, Ieladeinu has slashed maltreatment of the children it serves by 87%, neglect by 72%.
"UNICEF has found Ieladeinu´s work not only valuable for the Jewish community’s children it cares for, but also as a model to be followed universally in dealing with this type of problem,” said Dr. Rivera Pizarro, UNICEF’s representative.
“Ieladeinu´s activities are tremendously valuable to its main beneficiaries, the Jewish community’s boys and girls who have been subjected, in one way or another, to abuse and violence. But it does not end there. It has provided a model to change the situation of thousands of children exposed to the same circumstances throughout Argentina."
To achieve these results is a matter of maintaining focus, said Rabbi Tzvi Grunblatt, Director of Chabad of Argentina. “We look at every child as if they are our only child. We may be an institution, but don’t spare the devotion each child needs.”
Ieladeinu programs operate on three levels: children’s homes, children’s day shelters, and family assistance programs. Fifty-seven children, who were at extreme risk for physical violence, currently live in the five small Ieladeinu-run homes.

“It is a therapeutic home where each and every situation is a means to re-socialize and humanize the children,” according to Ieladeinu director Karina Pincever.

Even before Ieladeinu began, Chabad of Argentina had a strong network of social programs. Founded over four decades ago, Chabad of Argentina grew to 28 community centers with hundreds of programs reaching Jewish people in Buenos Aires and beyond, in Rosario, Cordoba and Tucaman.

With the collapse of the Argentine economy in 2001, an estimated 50,000 of the country’s 200,000 Jewish people were plunged into poverty. Calls for assistance poured into Chabad. Until Ieladeinu opened its first home in 2002, Jewish children were routinely placed in government run homes.

Demand for placement in Ieladeinu’s homes is climbing, again. “We are going through some economic turbulence again. In many situations, violence starts when there is an economic crisis,” said Rabbi Grunblatt.

Argentina’s inflation rate is running at 30% yearly, and Ieladeinu is feeling the pressure. Prices for meat served in the children’s homes has tripled in price compared to three years ago. Ieladeinu’s budget jumped by $500,000 this year, Rabbi Grunblatt estimates, because of inflation. The program does not receive any government funds, and receives most of its support from Jewish philanthropists outside of Argentina.

“The association of Chabad with UNICEF proves that you needn’t abandon your individual identity in order to make a universal contribution,” said Rabbi Grunblatt at the event Tuesday, explaining that Ieladeinu is dedicated to Jewish children, and as such, enriches their growth with a healthy Jewish identity. “But in doing this, Ieladeinu makes a universal contribution, as this book proves, for the larger world to learn from our successes and apply them accordingly.

The book, which bears the logos of UNICEF, Chabad and Ieladeinu, and includes works by the Lubavitcher Rebbe in the bibliography, systemizes Ieladeinu’s methods for protecting children so that others may emulate it, and brings with it a stamp of approbation that will allow Ieladeinu to continue its work on behalf of Argentina’s most vulnerable population.