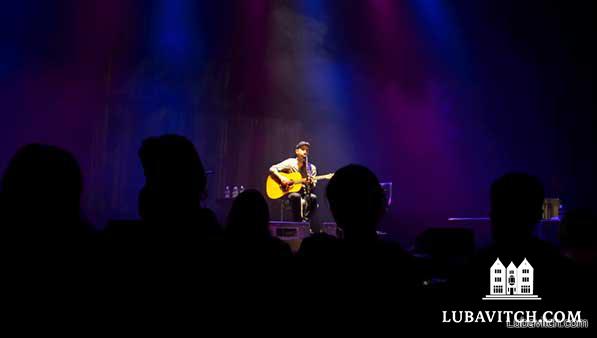 Dressed in plaid shirt and grey slacks with wisps of curly hair poking out of his black Fedora, Levi Robin sits in his studio cradling his guitar, humming gently to himself. The 22-year old singer/songwriter who recently got married is starting to make waves in the music world. Last year, he released his EP and opened for Matisyahu’s US tour. He took some time out from his practice to talk about music, Judaism and his journey uniting the two with Natalie Ling for lubavitch.com

NL: I understand that you grew up in Orange County to a non-observant family. What sparked your interest in Judaism?

LR: Judaism was actually the first thing I crossed off when I started feeling a sensitivity to spirituality in my adolescence because it had always been taught to me as being G-dless. But one day, my dad told me that he was friends with some people who were starting up a shul in Venice Beach and that they had brought in a young rabbi, Rabbi Citron, the disciple of a spiritual master, the Rebbe.

The words ‘spiritual master’ was in my lingo and so my ears perked up. My dad then told me something he had heard about the Rebbe and it got my attention enough for me to go up to my room and Google it. I found a video of the Rebbe and he was talking about pnimius hatorah [the esoteric part of Torah] and the soul; he was validating all my concerns. After that, I found a link for daily Tanya. When I clicked on it, it opened up to Shaar HaYichud V’Emunah and I had this overwhelming sensation that all my conscious wants were presented to me in a book. It blew my mind, totally.

How did this inspiration convert into action?

When I was 17, I learned the whole of Tanya twice within 6 months and I took it very seriously. I considered myself a student of the Alter Rebbe and whatever he said to do, I did. When he said to fast half days, I did it.

When I learned that the Alter Rebbe also wrote the Shulchan Aruch – that put me in a place of cognitive dissonance. I thought, here is the wisest person I have ever been exposed to, the most saintly, and he is saying that I need to follow halakhah, that I have to deal with mundane life? So I started to keep shabbos and pray three times a day. I really wrung out my soul to G-d in everything, in my learning. It was an uncovering of reality, not just of Judaism. Then my father passed away and I started going to shul every day to say kaddish. That was the only thing I could give back.

Tell me about the first time you picked up a guitar…

The first time I picked up a guitar was at my friend’s house—his dad had got him an electric guitar. I hit the strings and I felt the vibrations in my chest. Something felt really right; so much so that it evoked a deep will in me to get a guitar. I was 12. I loved holding it, I liked the way it looked, how cool I felt. I convinced my parents to get me a guitar for Chanukah, a blue fender squire. I learned to play power chords and, as soon as I did that, I started to write my own music.

When did you know that you wanted to take music more seriously?

When my own writing started changing my perceptions. I was relying on my subconscious to teach me messages. I would mouth sounds until they became words and so I had whole songs that I didn’t understand. I was writing about being on a path that wanted something more, but I wasn’t thinking of those things at the time. I wasn’t that kind of kid, I was into sports, I was a competitive gymnast. I loved baseball.

Yeah, in a certain way I started getting spooked by my own writing. There were parts of myself that seemed to be trying to tell me something. Each song was one step ahead of me. The process and discipline of song writing kept sensitizing me more and more to a sort of soulfulness.

Niggunim are called “the pen of the soul.” What does this mean to you? What is the relationship between music and Judaism?

Yes, I share that sentiment. The relationship is something that is like a dust particle for me; if you try to grab it, it will always evade you, you can’t pull it out of its flight. That’s the way I feel about the answer to this question. The closer you get to defining it, the more elusive it becomes. Music is really inherent in everything. The Alter Rebbe, speaking about Shir Hashirim [Song of Songs]—he says that shir (song) is the general soul of all the souls of the Jewish people. It takes a breadth of mind to approach this topic but every person is a shir chadesh, a brand new song. In every generation, we are singing a brand new song to Hashem. My songs come out in a more literal sense, but we are all constantly singing.

How do your songs reflect that?

The composition is tied up with the composer. The work of an artist is to allow someone else to see through their lens. When I play I don’t think ‘I am performing’, I am inviting; I am inviting people to share with me some of the deepest, most raw places in my life.

What are you currently doing musically?

I have been playing for crowds around the country at Chabad houses. It’s really near and dear to my heart to play for people that are close to me. The Jewish people are my family and I want to connect to them, so I want to share my experiences with them.

I think I also have it in my head that maybe there will be someone like me who I’ll be able to affect; maybe it will be an 80-year-old woman or a little kid or the rabbi. Me sharing my songs is like me sharing the miracles in my life and when we experience miracles, we shouldn’t keep that to ourselves; it can bolster our faith in Hashem. And maybe I can paint a picture of Judaism which someone might not see themselves in right now, but maybe I’ll be able to paint them in it.