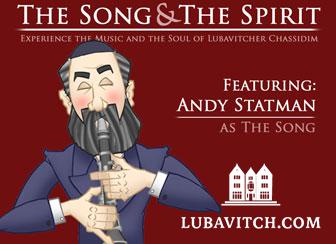 Mastering three and four part harmonies in a song without words kept members of Chicago’s Chabad Choral Ensemble out late last night. They’re practicing for the “Song and Spirit” concert that’s coming up on June 30 in the North Shore Center for the Performing Arts, a space that’s Skokie’s answer to New York’s Lincoln Center.

Dr. Marlon Kleiman and Rabbis Levi Stern and Mendel Moscowitz, with help from Rabbi Moscowitz’s son Mordechai, worked on tightening up their pitch and timing because they’ll be performing before an audience of 900, or more. The heat is also on because they are part of the 25 voice choir that will open for Andy Statman, a mandolin and clarinet master praised by the New York Times for “Unearth[ing] the soul of Jewish music.”

“We wanted to do something that would stir the spirit and give people an appreciation of the soul of Chabad,” said Rabbi Daniel Moscowitz, director of Lubavitch Chabad of Illinois. Song and Spirit will also feature a talk by author Rabbi Yossi Jacobson and the music of Cantor Schneur Zalman Baumgarten and Ruby Harris.

Wordless melodies known as niggunim are more than hum-able tunes. “Niggunim are an important mode of access to the spiritual,” said Dr. Naftali Lowenthal, who lectures on Jewish spirituality at University College London. Each session of his Alef Kabbalah classes, offered through Chabad Research Unit that Dr. Lowenthal directs, begins with the singing of a niggun. “Just as people have a physiological response to the sight of food, the niggun has a psychodynamic power in the core of a person.”

In settings where Jews of all affiliations gather, a niggun can overcome barriers that a lecture or prayer service cannot. “When I say ‘peace’ or ‘love,’ those words mean different things to different people. When we read the Torah, people who do not know Hebrew may filter the experience through guilt or longing that they do not know Hebrew. But sing a niggun, and everyone can join in, you bypass the differences,” Rabbi Asi Spiegel, Chabad representative of Eugene, OR.

When listeners think of Chasidic music as a genre, the kick up your heels and dance in a circle ala Fiddler on the Roof type of music comes to mind. There’s more to them, because “niggunim can be complex, the pour-out-your-soul type, marches with a beat or joyous,” said ensemble director Rabbi Mendel Moscowitz. It took him a while to choose among the 350 or so tunes in the official Chabad canon so that concertgoers will get a good sampling of the range.

For the fifteen boys, ages 10 to 13, in the ensemble taking part in the practices, alongside the adult members of the group, is more than show prep, but part of their growth as Chabad Chasidim. The first Lubavitcher Rebbe was known to study Torah and pray with the cadences of a niggun. Rabbi Menachem M. Schneerson, the Lubavitcher Rebbe, of righteous memory, taught niggunim and punctuated his talks by encouraging his Chasidim to sing them.

“Niggunim help you pray, help you organize your thoughts,” said Rabbi Mendel Moscowitz. One story, attributed to the previous Lubavitcher Rebbe Rabbi Joseph I. Schneerson, went so far as to say one could not be a true Chassid without becoming a ba’al menagen, a master of niggunim.

Illinois is one of the few states to offer Lubavitch schooling from nursery through high school. Seymour J. Abrams Cheder Lubavitch Hebrew Day School, Lubavitch Mesivta of Chicago, and Philip and Rebecca Esformes Lubavitch Girls High School attract students from as far away as Australia and Vienna. Because of its educational resources, Chicago has become a relocation destination for those looking for a comprehensive Chasidic lifestyle in the Midwest. Since arriving in Chicago seventeen years ago, Rabbi Epstein said he has seen the Lubavitch community triple in size.

On the night of the concert, the Chabad representatives of the 31 centers in Illinois will be honored for their contribution to that growth. “They are the unsung heroes,” said Rabbi Daniel Moscowitz, but now there will be 25 voices blending and harmonizing, and wordlessly sing their praises.